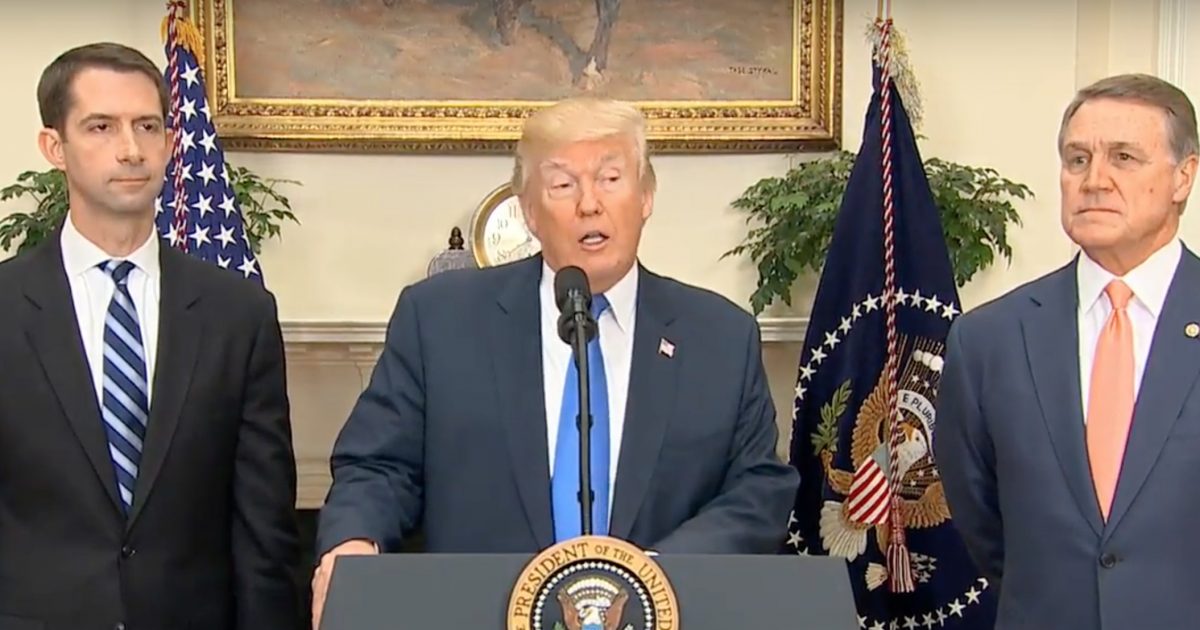 Not only does he want to drastically reduce illegal immigration levels and build ‘The Great Wall of Trump’ along the southern U.S. border with Mexico, the president wants to address legal immigration.

Standing alongside Senators Tom Cotton (R-AK) and David Perdue (R-GA) at the White House, President Donald Trump introduced a bill that would cut legal immigration levels  in half over the next ten years.

The new bill is a reworked version of this April’s Reforming American Immigration for Strong Employment (RAISE) Act, a bill that calls for a fifty percent reduction in the 1 million plus annual green cards that are distributed.

Trump supports the Raise Act because he believes that national security is at risk due to the huge influx of immigration the nation has seen over the years, saying that immigration has harmed employment opportunities for millions of U.S. citizens.

Trump campaigned on created a “merit-based” immigration system that he and many others believe would protect American taxpayers.

“This would be the most significant reform to the immigration system in half a century…It is a historic and very vital proposal.”-President Donald Trump (FOX)

On its face,this bill will have difficulty passing in the Senate. With Senate Republicans weiry and afraid to pull the nuclear option on any bill, it is highly unlikely that the 60 votes need to pass this bill will be reached.

As for the House of Representatives, moderate Republicans like Florida Congressman Carlos Curbelo, are already voicing their opposition to the measure, arguing that Americans need to be focused on reforming the tax code, and not cutting immigration.

Curbelo contends that by overhauling the tax code, more jobs will be created. Cutting taxes and making it easier for business to grow will indeed create more job opportunities.

Curbelo’s thoughts on tax reform are share my most, if not all Republican legislators, included Senator Marco Rubio, who recently teamed up with Ivanka Trump to address reforming the existing tax code.
0SHARES
48
SHARES
ShareTweet