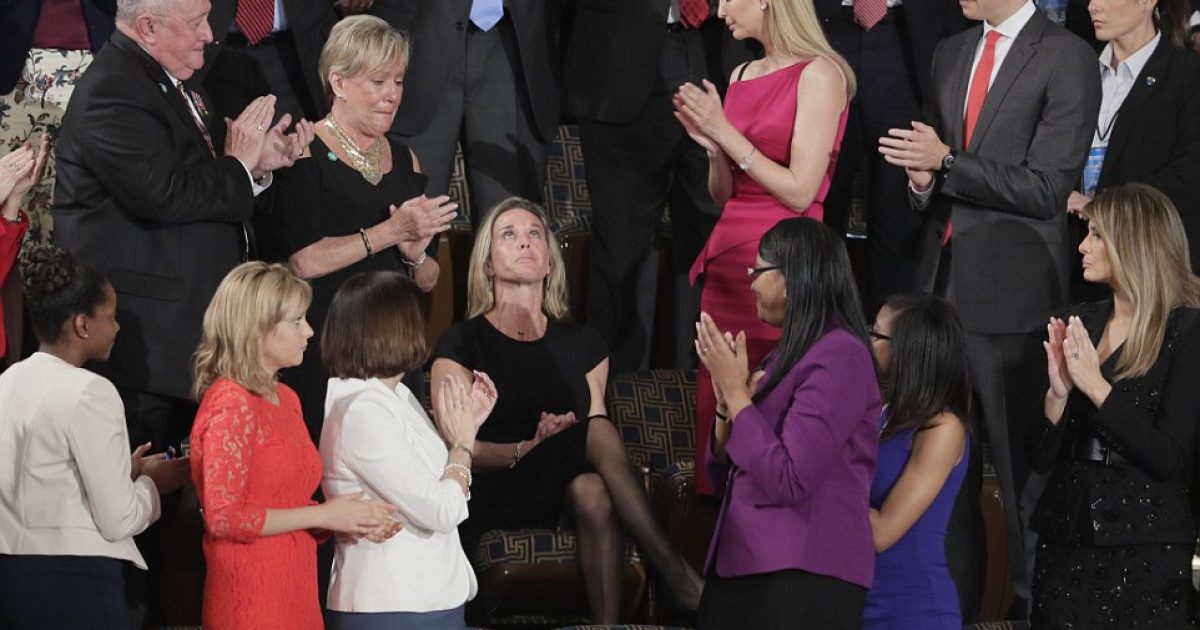 During President Donald Trump’s speech to Congress he paid special tribute to the widow of a Navy SEAL killed in a controversial raid in Yemen.

Carryn Owens, the widow of Chief Petty Officer William “Ryan” Owens garnered 2 minutes and 11 seconds of thunderous, sustained applause while Trump acknowledged her during his joint address to Congress.

The moment was the emotional highpoint in Trump’s key speech. Owens looked up at the ceiling, seemingly to her late husband, as she sat crying next to Ivanka Trump.

In recognition of the fallen SEAL, Trump attempted to set to rest questions about the success of the operation, the first military mission he approved as commander in chief.

Ryan dies as he lived: a warrior, and a hero — battling against terrorism and securing our nation.

As reported by CNN, seemingly acknowledging the length of the standing ovation, Trump said directly to Carryn Owens: “Ryan is looking down, right now, and you know that, and he is very happy, because I think he just broke a record.”

The raid in Yemen occurred in late January during the second weekend of Trump’s presidency. Owens died, an aircraft crashed and several service members were injured.

Bill Owens, Ryan Owen’s father, has demanded an investigation into the deadly raid, which has set off a public back and forth between the Trump administration and former Obama administration officials over who approved the mission.

I just spoke to General Mattis, who reconfirmed that, and I quote, ‘Ryan was part of a highly successful raid that generated large amounts of vital intelligence that will lead to many more victories in the future against our enemies. Ryan’s legacy is etched into eternity. Thank you.

As the Bible teaches us, there is no greater love than to lay down one’s life for one’s friends. Ryan laid down his life for his friends, for his country, and for our freedom — we will never forget Ryan.

In front of the world to say your husband’s life mattered and served this country well, and she responded to that, that was a moment. It is an emotional moment . . . That was a very healing moment for everyone.