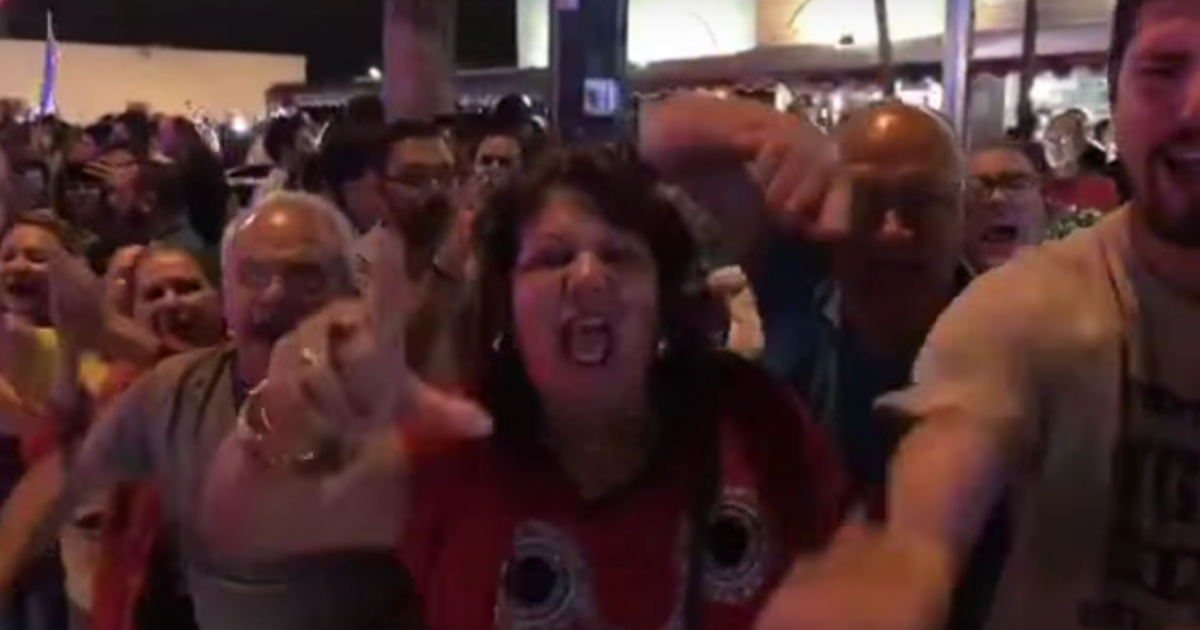 Around 2 am, It was raining in Miami.

8th street, specifically in front of the famous Versailles restaurant, was closed off by police officers. The flashing lights from police cars illuminated the setting, pots and pans being used as drums were heard, cars honked to no set tune, red “Make America Great Again” hats were worn by people cheering and singing and crying and dancing along to music, and Cuban flags were proudly being waved in the air.

Miami is home to many Cuban people who left Cuba after the Castro regime took over. They had to assimilate in a new country, find work and establish a stable foundation for their future generations. Friday night, the world found out that Fidel Castro had died at 90 years old, and Miami responded by chanting “Libertad.”

Oswaldo Hernandez, a 51 year-old delegate of the Cuban exile group Vigilia Mambisa, was celebrating in front of the restaurant with his wife, Dulce Martinez, a spokeswoman for the group, and other Cuban exiles and their family members. She commented that the news of Castro’s death was a moment of happiness for her family and loved ones and that she was taking the time to remember all the Cubans that were unjustly murdered over the years for not agreeing with the communist regime. She also noted the unjust treatment of pastors being incarcerated and their wives having to take over the churches to preach the gospel. She said that communism doesn’t believe in God, and she remembers all the people that have died trying to escape communism only to end up as dead bodies in the water. She says that there have been so many deaths that the Castro’s hands are grotesquely stained with blood, and that a day like this makes her happy because “Dios a hecho justicia y que el esta en el infierno.”

God has served justice and he is in hell.

She says this is because of the lesson Galatians 6:7 teaches, which reads “Be not deceived; God is not mocked: for whatsoever a man soweth, that shall he also reap.” She explained that Castro sowed hate, death, destruction and the separation of families. Dulce and Oswaldo are also hopeful about President-elect Donald Trump’s relationship with Cuba because they say he will be a President that will hold the American and Cuba flags important, and that Cuba won’t be the only country experiencing freedom but Venezuela as well.

Ruben, another 51 year-old man who chose not to give his last name, suggested that the celebration isn’t solely about the death of one man. The celebration is also about “la muerte de un sistema que va acabandose poco a poco para el bien de nuestro pueblo.”

The death is of a political system that’s dying out for the good of the world.

And he urges the people of Cuba to “wake up” and take the streets of Cuba to claim their part in history as a result of this.

Claudia, cheering right next to Ruben, explained that this moment was the death of the symbol that kept a country psychologically oppressed and frozen in time without allowance of moving forward economically or socially. She notes that things are still complicated because Raul is in power, but she assures that Fidel’s death should make people less fearful to act on making a change. She explains that having the presence of a dictator, no matter if he’s 90 years old, is what took away the courage of the Cuban people from doing something.

A 73 year-old veteran named Sixto was emotional in explaining that this is the beginning of a positive future for his country. He commented that crazy people put Fidel in power and that God has taken him out of it.

Everybody celebrating has their own story. Many people cheering last night had dreams that were cut short. Some stories may be graphic and many might be sad, but a moment like this creates a mosaic of insightful anecdotes that were waiting to be shared.