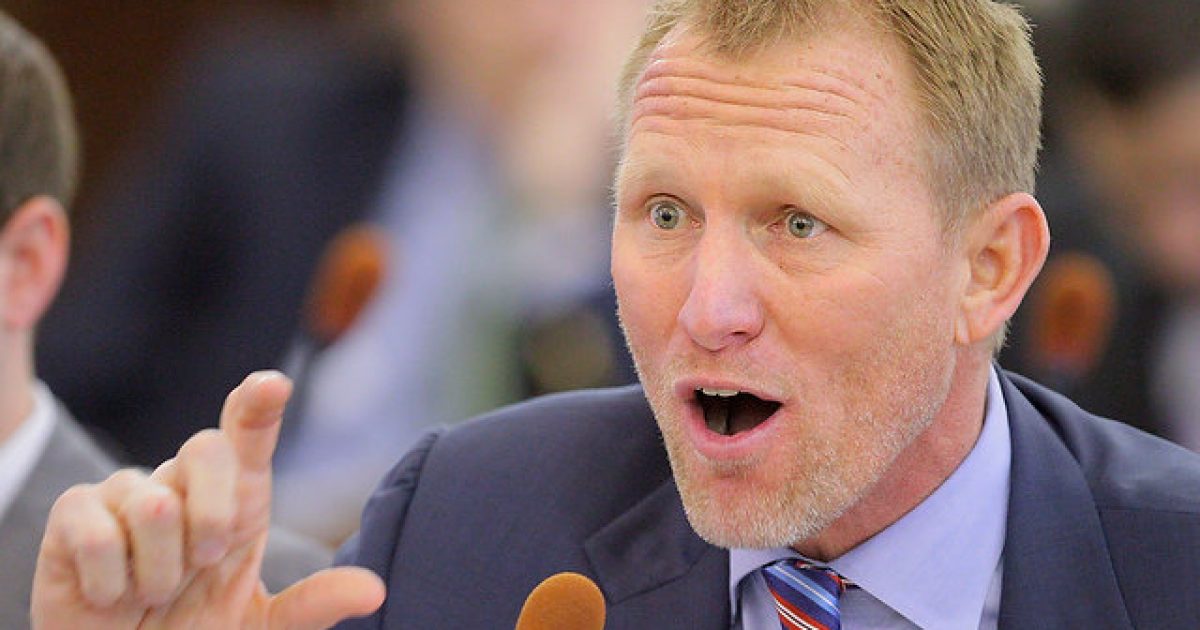 As was to be expected, the heated race in Florida’s 18th congressional district has just become that much more contentious.

During a candidate interview with the TC Palm Newspaper,  Democrat Randy Perkins and Republican Brian Mast just about strangled one another. At one point in the interview, it seemed as if Perkins was going to literally force-feed Mast a sack of sugar.

Perkins has been relentlessly attacking Mast for receiving sugar industry donations in-light of the recent toxic algae water outbreak that “Big Sugar” is being blamed for.

Perkins told Mast that he “lied about taking sugar money,” before asking him if knew his campaign did not return sugar industry donations made to his campaign.

Mast said he had returned “every penny of sugar money.

Mast: I never did

Mast at the direction of his fundraiser Zach Burr, went all in for Sugar. Burr organized a couple high-dollar sugar fundraisers for Mast, and was corralling more sugar industry donations for the Mast-supporting Valor Super PAC.

Perkins then questioned Mast about a statement he made about recently finding out that his campaign didn’t give back the money.

Perkins: You just made a statement a week ago that you just found out that your campaign didn’t give back the sugar money back?

Mast: We gave every penny of sugar money back, some came back and asked us for another check.

Perkins: Are you going to tell this room and this audience, that seven weeks ago your campaign was not notified that they (sugar donors) didn’t receive the money?

Mast: I couldn’t answer that whatsoever

Perkins: So you are going to tell me that when  your campaign treasurer found out that seven weeks ago, was notified by Sugar they had not received your money yet, that he did not tell you?

We’re here three minutes and Randy Perkins and Brian Mast are already going at it (while Carla Spalding looks on) pic.twitter.com/nT4rH1VgC9

According to Mast’s  Federal Elections Commission (FEC) report, on June 15, 2016, several reimbursements were made members of the Fanjul family. The Fanjuls are celebrate sugar barons who own Florida Crystals. (Source)

The FEC reports that the money was returned then, but it has now been learned that the checks did not arrive until September of this year. In other words, it appears as if the person in charge of the campaign’s bookkeeping held on to the checks, and did not send them out at the time Mast said they went out.

It has been learned that Zach Burr, who is also advising Mast and has been the liason between Mast an the executives over at Florida Crystals, was notified of the lack of donation repayment.

Burr is the key figure and decision maker in the entire “Big Sugar” donation scandal that Perkins is harping about.

In terms of campaign finance, nothing goes in or out of the Mast for Congress campaign without the express knowledge and approval of Zach Burr.

We emailed Burr asking him if he could furnish bank statements showing when the checks were cashed, and copies of the checks to show when they were written, but Burr has not responded to our request.

**UPDATE– Zach Burr responded, asking us to contact Madeline Anderson in regards to the checks. The same request has been made to Mrs. Anderson.

The latest polls have Perkins and Mast tied. This is one of the most watched congressional races around the country and is expected to go down to wire on election night.