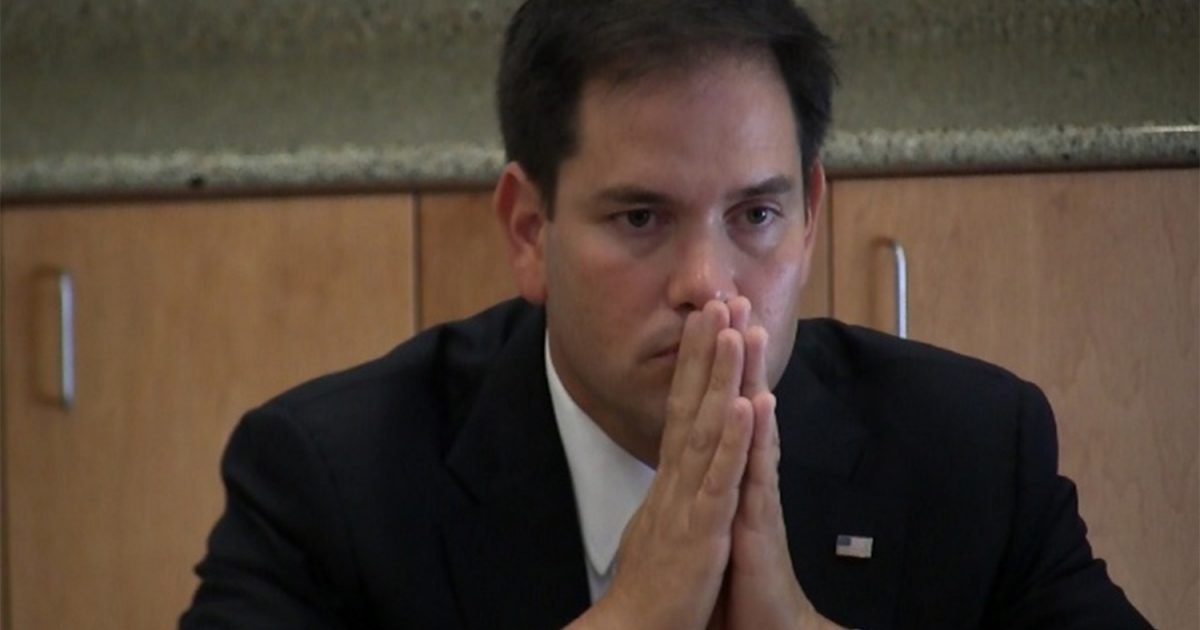 You would think that Senator Marco Rubio had enough problems with his lagging national poll numbers, but now it is being learned that one of his aides, Rich Beeson, may have punched one of Senator Rand Paul’s advisors, John Yob.

Rich Beeson, the CM for Rubio, punched me in the face tonight on Mackinac Island. The Michigan State Police are looking for him. #MIGOP

This kind of behavior seems to be a trend with Rubio’s campaign. Here is what Breitbart reported about the incident:

For now, Rubio’s campaign is standing by Beeson. Spokesman Alex Conant hasn’t responded to a request for comment. Rubio, one of the architects of the Senate’s “Gang of Eight” amnesty bill, is coming off a debate performance Wednesday evening in Simi Valley, California, at the Ronald Reagan Presidential Library where he doubled down on his support for open borders immigration policies and amnesty for illegal aliens.

Security camera footage from the scene of where things happened—at Horns Bar on Mackinac Island—provided to Breitbart News by Yob, purports to have caught the sucker punch from Beeson. That video is contained here in this piece. A photo Yob provided Breitbart News also purports to show Beeson flipping his middle finger at the camera inside the bar.

Beeson is the GOP establishment mastermind behind the massively failed Project ORCA last election Rubio’s campaign remains silent on the allegations, which Breitbart News has confirmed were forwarded to a prosecutor for review. Rubio’s thug of a campaign manager chimed in, and apologized to Yob. In addition, Rubio’s campaign manager Terry Sullivan apologized to Yob—but not publicly—for Beeson’s violence, according to emails Politico obtained.

“According to the email exchange, Sullivan at first believed Yob was joking but then apologizes when he realizes Yob is serious,” Politico wrote of the emails without publishing them. “It is understandable that he would have initially thought that this was too crazy to actually be true,” Yob told Politico about Sullivan’s reaction. “The Rubio campaign is not to blame. Today I hope that he and Senator Rubio will take action on this matter as the state police investigate.”

So, let’s talk about Terry Sullivan. The pint-size South Carolinian, who tends to burn around the neck from too much sun exposure, is just as thuggish as Rich Beeson. That is if Beeson really punched Yob. Shortly after he stepped off the stage from announcing his presidential run in Miami, Rubio was about to be interviewed by Fox’s Sean Hannity, who flew down to cover the announcement. Just as the two were going to begin the interview, I handed one of Hannity’s aides my phone so that she could snap a picture  of the two.

That is when Terry Sullivan stopped the girl and instructed her not to take the picture and return the camera. I told Sullivan that it was a “Di*k-head move to do that.” Meanwhile, Sullivan allowed other people that were standing around him to take pictures with their cell phone.

After the interview, I bumped into Sullivan, who thought I shoved him, and apologized for doing so. But Sullivan didn’t want to hear it.  He said if I ever called him a “di*k-head again,” that I would have to pay the piper. I suggested that he follow up his threat there, but Sullivan’s courage was smoke-and-mirrors. The little guy mustered up every bit of energy he could and got right in my face, threatening me with bodily harm. Alex Conant, who was walking with Sullivan, stayed back and silent. Anyone who knows me, knows  that I do not back down to anyone. I stood my ground, and measuring my aggression.

Sullivan took off, but then returned to threaten me again, and tell me to leave the event. Again, Sullivan got in my face, coming less than an inch or so from touching my nose. Little did he know that it would take a lot more of this kind of behavior to intimidate me, and that he was moments away from tasting my right elbow, which would have been followed up with a spinning left elbow.

I left, without incident. It turns out that Sullivan and the rest of Rubio’s ilk of consultants were still upset at me for coining the term “Marcophone” when he co-sponsored the disastrous “Gang of Ocho” immigration reform bill in 2013. That’s right. After two years, these chumps are holding a grudge, regardless of the dozens and dozens of pro-Rubio stories the Shark Tank has published.

Regardless of how much I think Rubio is qualified to be president, this is on Rubio is. He hires thugs like Sullivan, who many grassroots activists say has been a total prick to them. Maybe Rubio should take Yob’s advise, and go a bit further and clean house?

Any of you wonder why his campaign is sucking wind.

Anonymous sources will tell media outlets that my Marcophone post was a personal slight against Rubio. That assertion would be false.

Advise to Camp Rubio: Take heed and govern your words. Measure them.

Oh, and in the case you hear that some political nobody by the name of Sarah Rumpf is going around saying that she stood next to Sullivan during the entire incident, know that she is an opportunistic liar, who is looking to score brownie points with this group. Like I said, the only person standing next to Sullivan was Alex Conant, and then Alex Burgos. Also, there wasn’t any yelling as Rumpf contends. If there was, many more people would have witnessed it.

Maybe I should release  the audio of the incident? That will surely discredit dopey Sarah, but will also gut Senator Rubio and his staff.

Rumpf has a history of trying to suck up to anyone who she feels can help her politically. Just look at everything she would write for Breitbart. Every single story she wrote about Rubio was completely biased in his favor. There wasn’t any semblance of balance.

Should we expect to see Rubio for President ads on her sight?
197SHARES
252
SHARES
ShareTweet