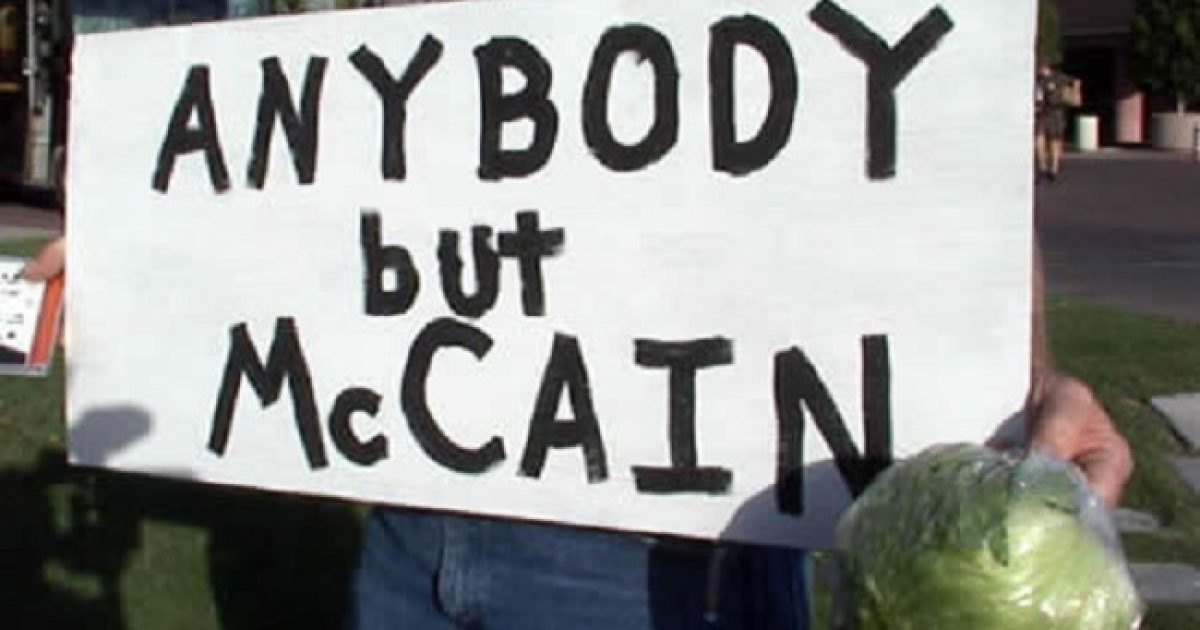 McCain’s Seat is Ripe for the Picking

According to a new poll released by the Democratic firm, Public Policy Polling on Tuesday, Senator John McCain’s (AZ-R) seat is ripe for the picking.

They found McCain is very unpopular with some conservatives and he holds only a narrow margin over an array of potential challengers in a Republican primary.

Only 21 percent of conservative voters feel McCain is doing a good job. 71 percent disapprove. As an overall, 41 percent of Arizonans say they approve of his job performance, 50 percent say they disapprove.

Today’s political environment is challenging for all incumbents, but as recent election cycles have shown, candidates and campaigns matter. John McCain’s strong record of defending America’s national security, standing up for veterans, and focusing on Arizona’s economic growth and job creation place him in strong position as he seeks re-election.

Don’t let him lie to you. It is very hard to unseat an incumbent. In some cases nearly impossible but if the core of your supporters start to turn on you and think you are not doing a good job, then you are in trouble. That is exactly what is happening in Arizona.

Republicans who have been eying McCain’s seat include: Representative’s Dave Schweikert and Matt Salmon and State Senator Kelli Ward.

Even though the challengers have low name recognition they have very high approval ratings.

It is important to point out even though the poll shows conservatives are not in favor of McCain in Arizona, he has very high name recognition. He also has raked in $1.6 million in the first quarter of 2015. As of this date his total cash on hand is now $3.6 million. That is a big war chest and money speaks in elections.

Back in 2010 McCain also crushed his Tea Party challenger, J.D. Hayworth by 24 points in the poll. Thus leaving people wondering if anyone can unseat the Maverick.