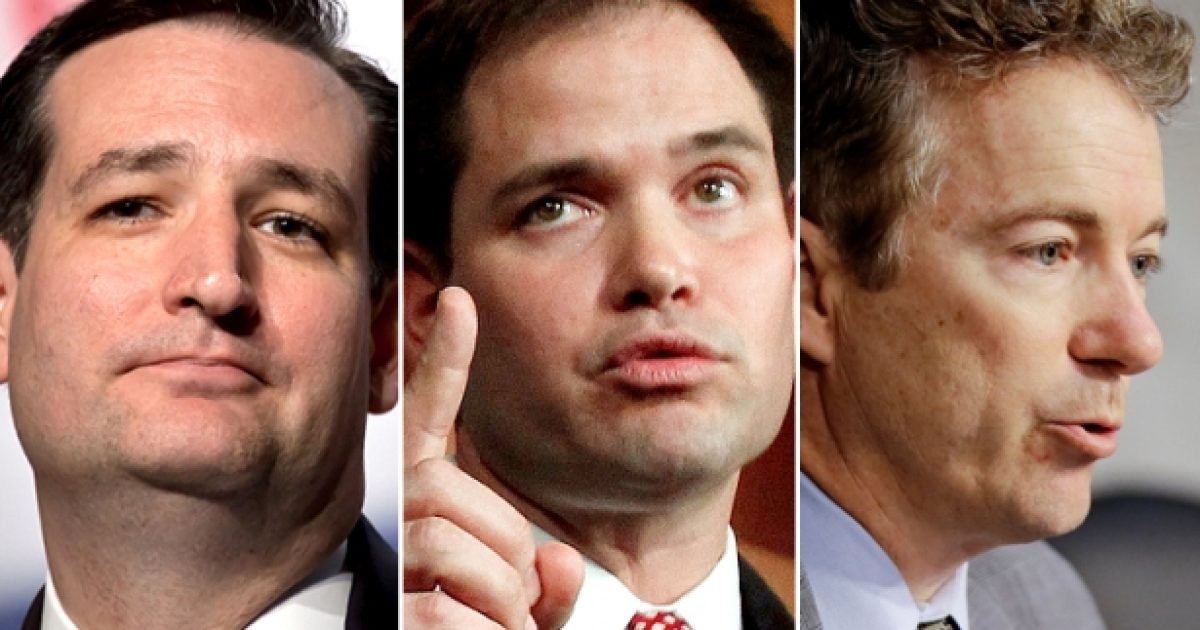 Rubio and Cruz Disagree On U.S. Funding Of Syrian Rebels

Washington, D.C., will  continue to keep its doors open, as the House of Representatives has approved the latest continuing resolution to fund President Obama’s dysfunctional government.

Now it was up to the Democrat-controlled Senate to pass the continuing resolution in that chamber of Congress, and they did.

But three of the most charismatic and potential 2016 Republican presidential candidates, Senators Ted Cruz (TX), Rand Paul (KY), and Marco Rubio (R), are not on the same page with the current CR.

Because the measure somewhat addresses the ISL threat in Syria, Rubio voted for the CR because he believes it is “in the best interest of our national security.”

Both Cruz and Paul voted against the measure.

Cruz said that the CR was not in the best interest of the country, and that it only served to “empower a lawless president to continue his plans that threaten the economy and our national security.”

“I say this to you without a shadow of a doubt, as I said weeks ago: if we do not confront and defeat ISIL now, we will have to do so later. And it will take a lot longer, it will be much costlier and even more painful. We will confront ISIL one way or the other, and I believe the sooner the better. What we are asked to do now is approve funding to arm moderate rebel elements in Syria. There is no guarantee of success. There is none. But there is a guarantee of failure if we do not even try. And try we must. For one fundamental reason – if we fail to approve this, the nations of that region will say that America’s not truly engaged, that Americans are willing to talk about this, but are not willing to do anything about it.

“And so despite my concerns about the underlying bill and the budgeting that it entails, I will support this resolution. Because I think it’s in the best interest of our national security.”-Sen. Marco Rubio (R)

I cannot vote to empower our lawless president to continue his plans that threaten the economy and our national security,” said Sen. Cruz. “The Continuing Resolution funds Obama’s Amnesty, it funds Obamacare, and it funds military operations in Syria that are not authorized by Congress and are dependent on unreliable actors in the region.”

“I have offered several amendments to make America more free, strong, and safe, but the sad fact of the matter is that Democratic Majority Leader Harry Reid’s do-nothing Senate refuses even to allow vote on them.”

“Given that this Continuing Resolution does nothing to secure the border, give Americans any relief from Obamacare, or commit President Obama to a clear strategy against ISIS that protects U.S. interests, I cannot in good conscience vote for the Continuing Resolution,” said Sen. Cruz. “It is my fervent hope that Americans will speak loud and clear in the next few months, elect a new Senate majority, and give the new Congress a strong mandate to reverse the disastrous decline orchestrated by President Obama and the Senate Democrats.”-Sen Ted Cruz (R)

Who do you think has this right, Rubio or Cruz?