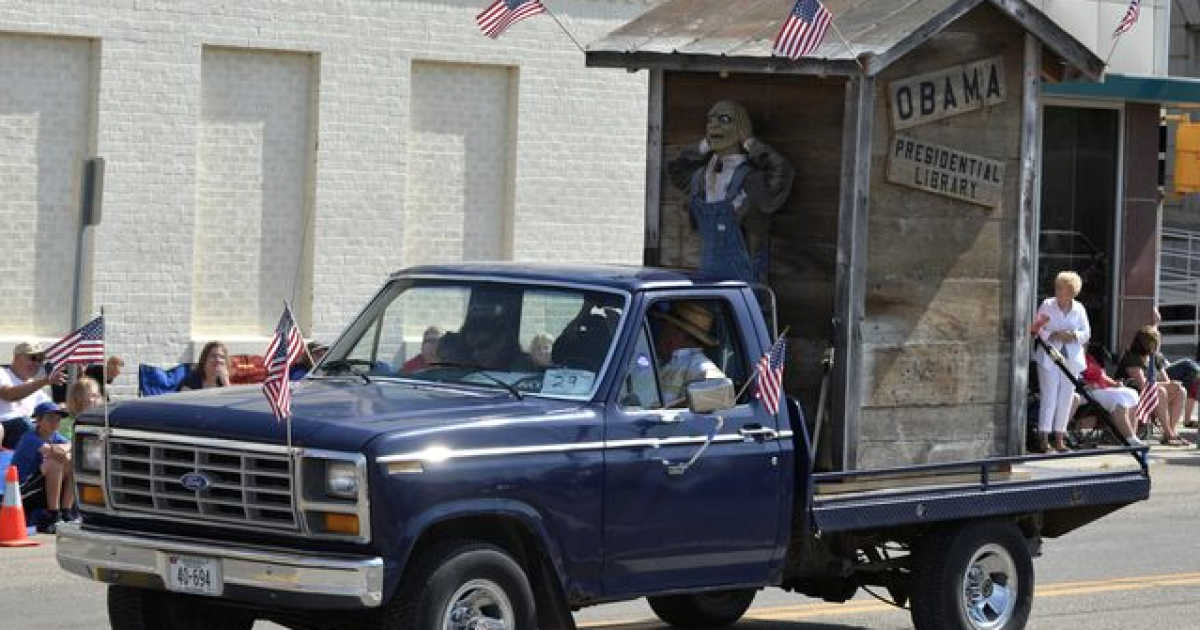 Just when you think the Eric Holder Justice Department can’t be more ridiculous — comes this story from the July 4th weekend parade in Norfolk, Nebraska.

The float included a cartoonish figure in overalls with a walker standing near an outhouse labeled the “Obama Presidential Library.” Once a photo of the float was posted on the Internet, it created a firestorm on social media.

Dale Remmich of rural Norfolk said Monday he is a military veteran who created the float to show his displeasure over the president’s handling of the Veterans Affairs Department.

“The float was political satire and an expression of political disgust,” he said. “There was no racism involved, no hate for anyone.”

And now Eric Holder’s Department of Justice is involved because… well, racism of course!

The U.S. Department of Justice is investigating a float that appeared at the annual Fourth of July parade in the small town of Norfolk, Neb. because the float featured a blue flatbed truck carrying a zombie-looking mannequin in overalls on the door of an outhouse labeled “OBAMA PRESIDENTIAL LIBRARY.” The Justice Department sent a member of its Community Relations Service team to Norfolk (pronounced “Norfork” by many locals), reports the Omaha World-Herald.

But as the Washington Examiner’s columnist Fingers Malloy points out — the Justice Department really has its priorities screwed up.

It’s good to see the Department of Justice tackling the tough issues.

The Justice Department, notorious for its speed and eternal vigilance when it comes to policing the lawlessness of the Obama Administration, is investigating a controversial parade float critical of the president less than two weeks after its debut in a Fourth of July celebration in the small town of Norfolk, Nebraska. The parade float featured a zombie-like mannequin wearing overalls, standing outside of an outhouse labeled “Obama Presidential Library.”

After the DoJ’s continued stonewalling of the investigation into the IRS scandal, who knew they could act so quickly?

Sadly, this administration has become so cartoonish that it has reduced itself to investigating parade floats, while letting the federal agencies who bully innocent civilians off the hook.