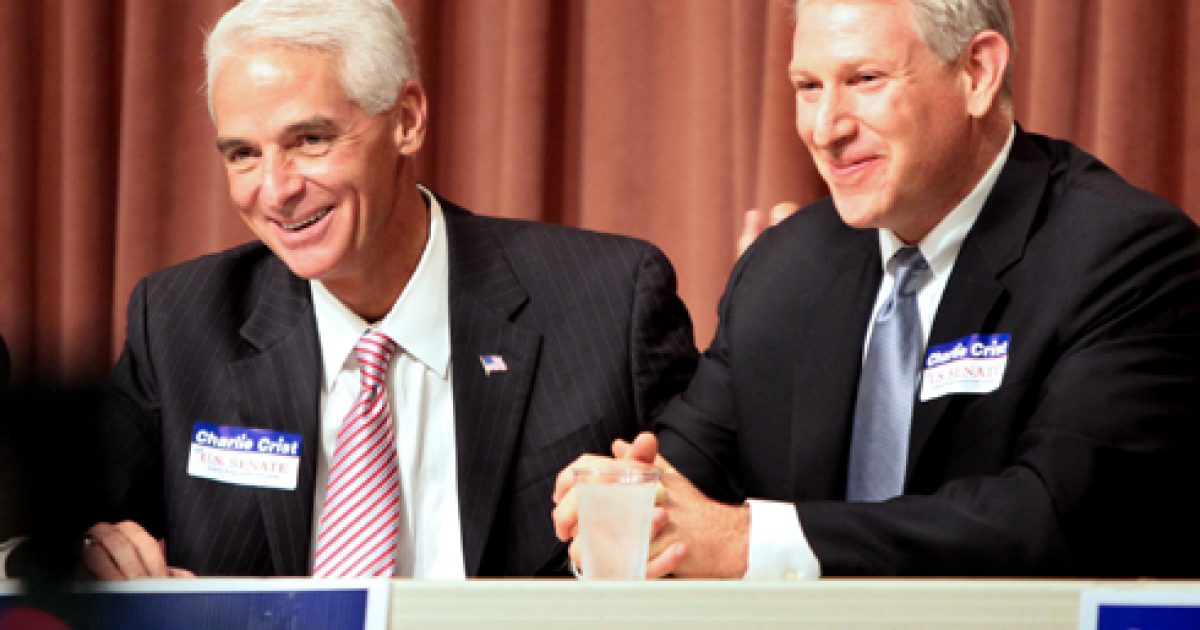 All of Charlie Crist’s Democrat and Republican Men

Charlie Crist’s announcement that he is running for Governor of Florida is imminent, this we already know. But considering that Crist touts his widespread support across party lines, will his old squishy Republican friends openly support his gubernatorial candidacy, or will they take the much quieter and less controversial support route?

It will be interesting to see if the likes of State Senator Jack Latvala, as well as State Representatives Peter Nehr and Dane Eagle, not to mention State House candidate Richard “Dick” DeNapoli, who twice heckled Senator Rubio, will embrace Crist’s run for office.

If he wants to be Governor so bad again, if he wants to come back to the state of Florida, and lead our state, why did he leave us when we had a 12% unemployment rate, and the state of Florida was having its hardest times? Weatherford continued,” Florida really needed a leader and stick up for them, why did he chose to leave? I don’t know how he is going to answer it. –Rep. Will Weatherford

The safe bet to take  here is that all of these guys will clam up, and probably help out Charlie  with any possible cross-over donors and voters within their respective districts.

Aside from the liberal Democrats like former Congressman Wexler, expect to see Greg Truex and former State Representative Mike Fasano, along with Michelle Todd, Crist former Senate staffer, to openly  line up behind his candidacy.

Here is some light reading for all of you who have forgotten who Charlie Crist is, and where he comes from.

Just last year, Todd attended a luncheon with Crist hosted by the Poynter Institute with Truax in attendance, as well as the moderate Republican State Senator, Jack Latvala. Todd is said to frequently field any questions for interview requests on Crist’s behalf.  Yet, there is more to Michelle Todd.***( For those of you in Rio Linda, Todd was disgraced from the Republican Party when she decided to continue supporting Crist after he jumped the GOP ship only) –Charlie Crist continues to align his Liberal allies

With Sink still hedging on a possible run, a potential Charlie Crist vs. Alex Sink Democratic Primary would be fun to watch. Sink would have the privilege of opening up the first wave of “Shock and Awe” political mudslinging against the political world’s foremost evolutionist, Charlie Crist.-Alex Sink Vs Charlie Crist

I guess its his coming out party, so to speak, so he is coming out and letting people know where he really stands philosophically-I don’t think it surprised a lot of us- he governed as a Democrat. –Crist’s Coming Out Party

On the mailer, Nehr posts three pictures of him looking pretty exuberant as he poses with Democratic U.S. Senator Bill Nelson, Democratic Guberntorial nominee Alex Sink, and with his ol’ buddy, former Republican, turned Independent, and soon to be Democrat, Charlie Crist. –Crist’s close ties to the FL legislature