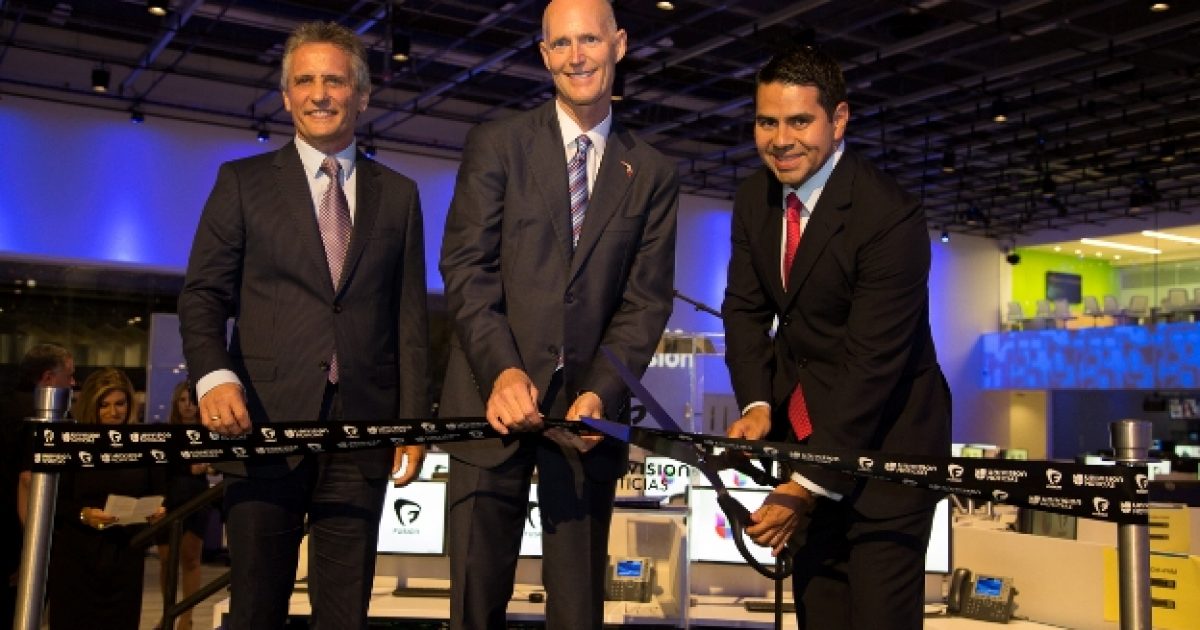 “Univision’s decision to grow here in Florida and create hundreds of jobs is great news for Florida families. Florida’s unemployment rate is below the national average for the fifth consecutive month, and we’ve created nearly 370,000 private-sector jobs.

We thank companies like Univision who are taking note of Florida’s growing economy and strong work force.”-Gov.Rick Scott

Univision President Cesar Conde praised Scott for his unwavering support and assistance in with Univision’s new venture during his remarks to the attendees of the networks ribbon cutting ceremony, adding that Fusion will be the first English-language 24/7 news network that will specifically targeting young Hispanics and those pesky millenials.

“This Newsport facility is a continuation of Univision’s investment in the future of Miami-Dade County and the State of Florida,” said Cesar Conde, President, Univision Networks.

“We are extremely proud of our award-winning News division, the most trusted news source for Hispanic America, and this new state-of the-art, 150,000 square foot operations/production facility will allow us to expand its capabilities in order to better serve our audience, in addition to housing our groundbreaking joint venture with ABC News, Fusion, the first English-language 24/7 news network targeted to young Hispanics and millenials, all of which will contribute to South Florida’s economy by creating jobs and attracting talent to the area.

We thank all of our partners, including Disney, ABC, Enterprise Florida, the State of Florida’s economic development agency, and The Beacon Council for their stalwart support and for helping us to further establish Miami as the undisputed home of Hispanic media.”-Cesar Conde, Univision President

The Spanish-language juggernaut network’s  accent to being the top network in the country is not without controversy, as its questionable political food fight with Senator Marco Rubio has been well documented, and many are questioning the networks true political agenda, considering that several of its TV personalities and executives have been outspoken supporters of amnesty for illegal immigrants.

The creation of Fusion is could be perceived as a way to indoctrinate young Hispanics to support amnesty for illegal immigrants, which is essence is supporting the breaking of U.S. immigration laws.