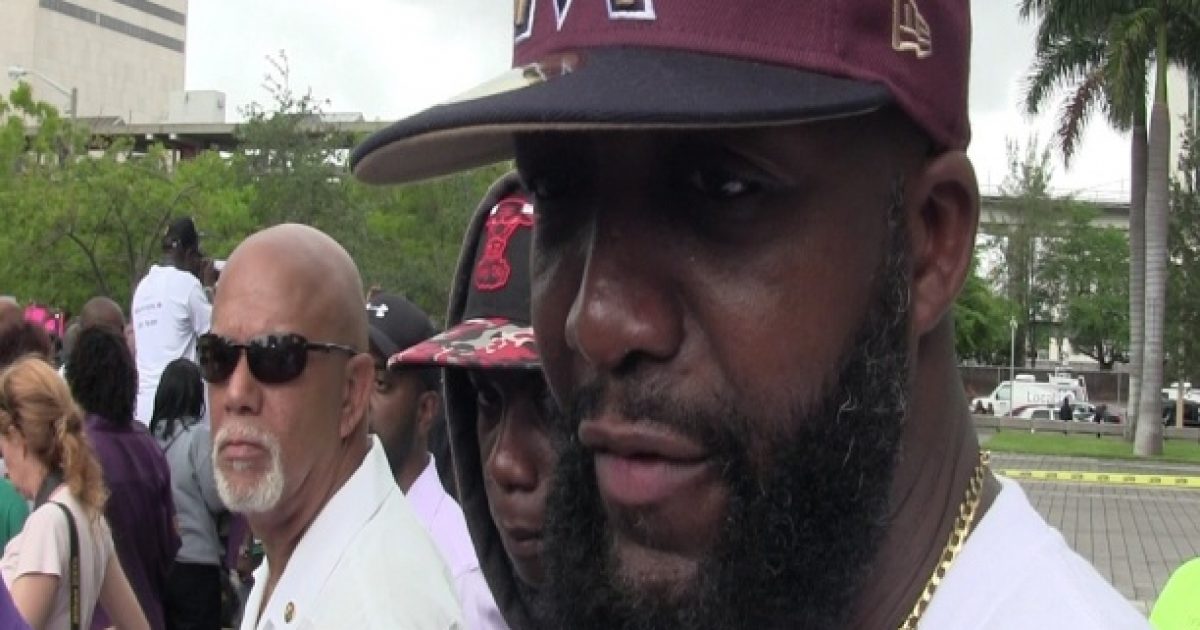 Trayvon Martin Alleged to Have Assaulted His Teacher, Dad Denies It

During the National Action Network’s rally in Miami, Florida, where 2000 supporters of the groups efforts to pressure the Department of Justice to file civil rights charges against George Zimmerman, Tracy Martin, the father of Trayvon Martin took questions from reporters gathered to cover the event.

Martin was asked if  one of the real reason Trayvon Martin was suspended from his school in Miami was due to “an altercation” he alleged to have had with one of his school teachers. Mr. Martin answered that “he could not confirm that” and he had “no knowledge” of the purported incident. Martin added that “we all knew he was suspended from school” and that it was his decision to take him up to Orlando. When asked if he thought it just a rumor that his son Trayvon had “an altercation” with his teacher, Martin said that “it wasn’t anything like he had an issue with his teacher.”

Shortly after Trayvon Martin is shot and killed by George Zimmerman, talk within some circles of the Miami-Dade educational system was that Trayvon had been suspended for assaulting a teacher at his high school, and that teacher, for fear of losing his or her job, chose to stay quiet about the assault, possibly pressured by school police and administrators to do so.


Here is what the Miami Herald wrote about Trayvon Martin’s “spotty” school record and suspensions.

The Miami Gardens teen who has become a national symbol of racial injustice was suspended three times, and had a spotty school record that his family’s attorneys say is irrelevant to the facts that led up to his being gunned down on Feb. 26.

In October, a school police investigator said he saw Trayvon on the school surveillance camera in an unauthorized area “hiding and being suspicious.” Then he said he saw Trayvon mark up a door with “W.T.F” — an acronym for “what the f—.” The officer said he found Trayvon the next day and went through his book bag in search of the graffiti marker.

Instead the officer reported he found women’s jewelry and a screwdriver that he described as a “burglary tool,” according to a Miami-Dade Schools Police report obtained by The Miami Herald. Word of the incident came as the family’s lawyer acknowledged that the boy was suspended in February for getting caught with an empty bag with traces of marijuana, which he called “irrelevant” and an attempt to demonize a victim.

Trayvon’s backpack contained 12 pieces of jewelry, in addition to a watch and a large flathead screwdriver, according to the report, which described silver wedding bands and earrings with diamonds.

Trayvon was asked if the jewelry belonged to his family or a girlfriend.

“Martin replied it’s not mine. A friend gave it to me,” he responded, according to the report. Trayvon declined to name the friend.-Miami Herald

**Note-We added the father’s denial of the allegation to the headline.