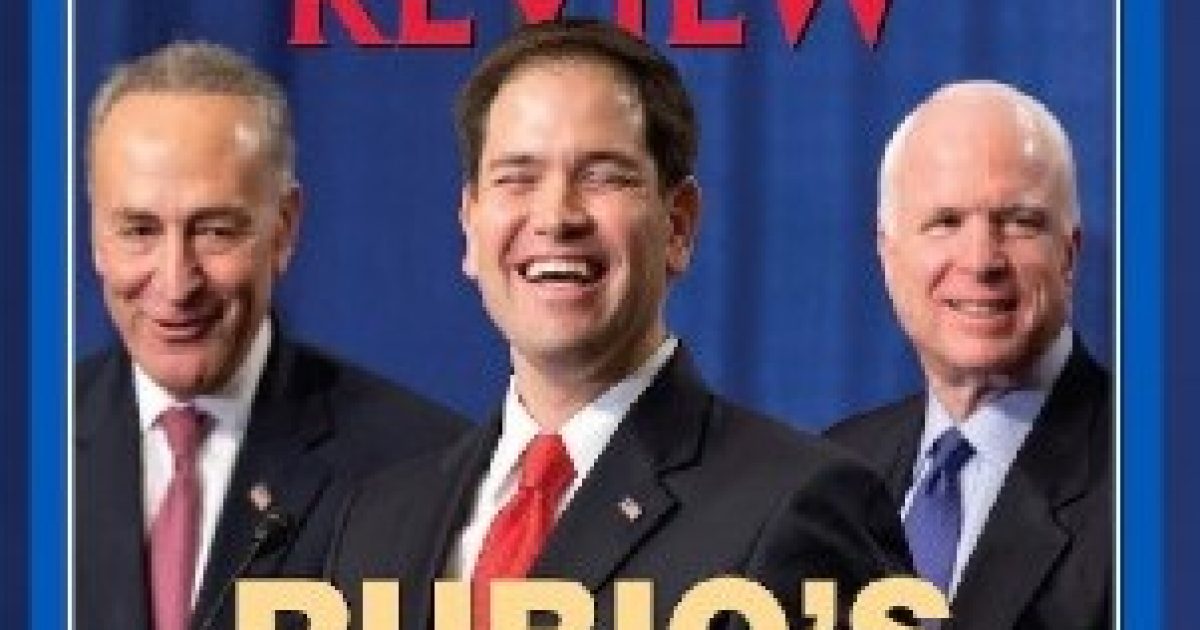 Rubio Admits Immigration Bill Has Mistakes, Looks to Fix Them

Since he introduced his ‘Gang of Ocho’ immigration reform bill on April 17, Senator Marco Rubio has been peppered with criticism, and protested over the perception that his bill is nothing more than amnesty for illegal immigrants. Yes, this is his bill, regardless of whether the other 6 or 7 liberal-minded U.S. Senators take ownership.

President Obama himself said this was Rubio’s bill, leaving conservatives to believe that this was a set up by Democrats tarnish to Rubio’s image. How the sham would work is, Democrats would get Rubio to sign on by capitulating to his practical ideas and demands, and then insert them into the immigration reform bill. Democrats would then attempt to hijack the bill by plugging in liberal agenda-driven language during the amendment process that would leave Rubio no choice but to pull his support of the immigration bill.

The Democratic Party narrative would then be, ‘Rubio quits on Hispanics. He does not support Hispanics.’ Or that ‘Rubio is not really Hispanic, he hates Hispanics.’

Did the Democrats dupe Rubio into sticking his neck out on an immigration reform bill that could already be dead in the water? The answer is, probably yes. But the sad truth is, Rubio duped himself into thinking that he could work with the most liberal and un-American Democrat Senators and their President, on an issue as complex and important as immigration.


Here is what I wrote back on April 4-

As we stated before, by the time this supposed bipartisan immigration reform bill is dropped in the Senate, and/or when it is put up for discussion, expect the bill to be so heavily influenced by President Obama and his pro-illegal immigration lobby, that it will force Rubio to pull his support. We could be wrong, but I seriously doubt that will be the case.-Shark Tank

It seems as if this idea that Rubio could pull out of the bill is growing more likely, after Rubio himself has recently said that he would not support a bill that compromised his principles in anyway.

During a short gaggle with reporters in Port St. Lucie, Florida, Rubio said that “people are happy with the E-verify measure , and entry-exist system that are outlined in the immigration bill, but when asked if there would be any changes to this flawed bill, Rubio said-

Well there’s going to be amendments. When asked if he was going to personally submit amendments to the bill, Rubio said, Absolutely, we are already working on, and some need to happen because of technical things that need to be corrected or other mistakes that are in the bill. Rubio then added that we need “strengthen elements of the bill that people have questions about.-Senator Marco Rubio (Video)

It is clear that the onslaught of conservative pressure directed at Rubio  regarding the ‘mistake-laden’ immigration reform bill, has taken its toll on the Senator. Some of these questions Rubio speaks of could be those that demand extensive clarity and transparency. For instance the world-famous MarcoPhone line of questions can be addressed, now that Rubio himself  said that he  is open for suggestions to improve the  bill.

Regarding the MarcoPhone craze of a couple weeks ago, the bill obviously doesn’t not state that work-visa immigrants will be given these phones, that was my opinion. However, the bill doesn’t say that they could or couldn’t eventually be eligible for the phone grants,  only stating that people “residing” or working along in the border region, which happens to span 100 miles from the U.S.-Mexico border, could be eligible for the phone grant.-see MarcoPhone