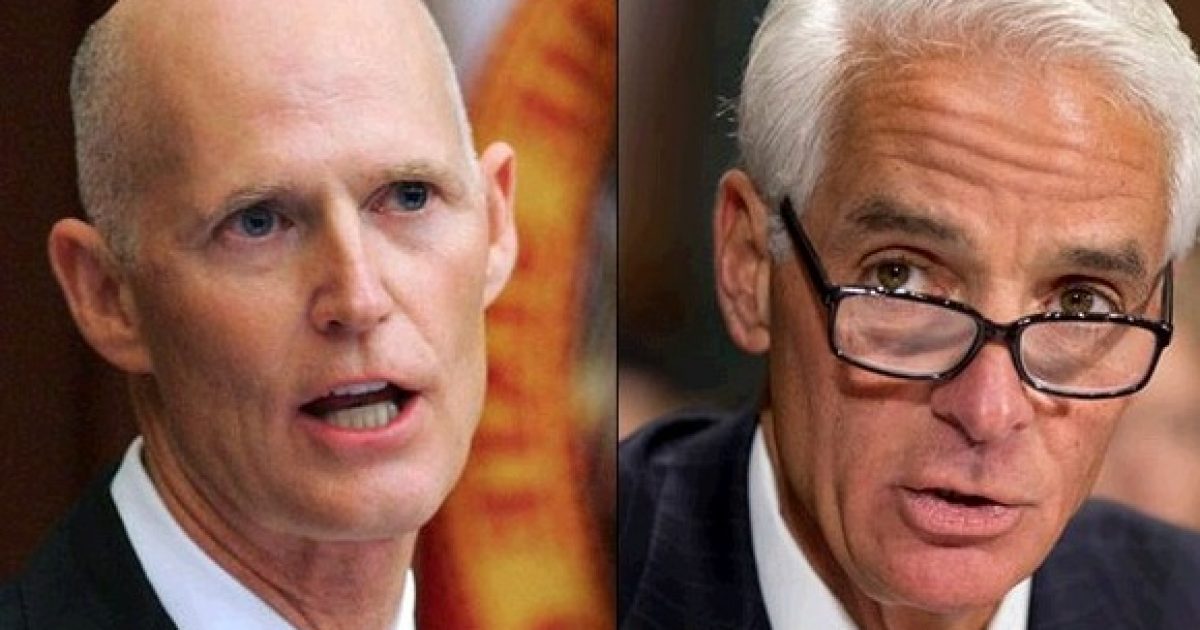 Alternate headline: Thanks for supporting teacher pay and Medicaid expansion, Governor, but you still suck. If the most recent Quinnipiac poll is any indication, Gov. Rick Scott faces a grim slog to reelection. Just to be clear, I’m defining “grim slog” as a 16-point smashing at the hands of Charlie Crist.  Lest there be any doubt of Scott’s current chances, he also trails his 2010 opponent, former CFO Alex Sink (34-45).

Quinnipiac polled 1000 registered voters over a 5-day period, after both of Gov. Scott’s reversals on teacher compensation and Medicaid expansion (and just as news of Lt. Gov. Carroll’s resignation broke). Although respondents approved of both measures (by respective margins of 74-21 and 50-40), Scott’s approval rating remained well in the tank at 36-49. In other words, the pander was for naught.

The crosstabs are just brutal. I urge you to read the whole thing for yourself, but here are a few that really popped at me.  First, Crist pitches a statewide shutout…

…wins across all age, education, and income groups…

…and wins across gender and ethnic lines.  Scott holds only 76% of Republicans, and loses independents by 20.

Most disturbing is the fact that a majority (50-40 overall and 51-36 among indies) voters view Crist’s partisan switch(es) as a sign of judicious moderation rather than proof positive of shameless opportunistic hackery. Between that and how the proposed med-marijuana initiative might affect turnout, I’d say it’s time to pound the alarm (and don’t tell me about poll integrity and sample sizes, not after last November’s debacle). The big winners here are Crist and the state’s Stand-Your-Ground law (56-36).

Per Quinnipiac, some cold comfort for Scott:

There isn’t much good news in these numbers for Gov. Rick Scott, but there is some,” said Peter A. Brown, assistant director of the Quinnipiac University Polling Institute. “His large lead over Agriculture Secretary Adam Putnam in a hypothetical Republican primary gives him some solace that he does not have to worry about an intraparty challenge. Scott’s support among Republicans appears pretty solid, although he has a lot of fences to mend with independent voters and he has virtually no crossover appeal to Democrats.

If The Shark Tank’s readers know anything, it’s that a good candidate with a strong, conservative message need not have initial high name recognition in order to succeed in a Republican statewide primary.

Speaking of which, here’s your exit question: Is there a Republican out there who could stand up a statewide campaign and beat both Scott and Crist?