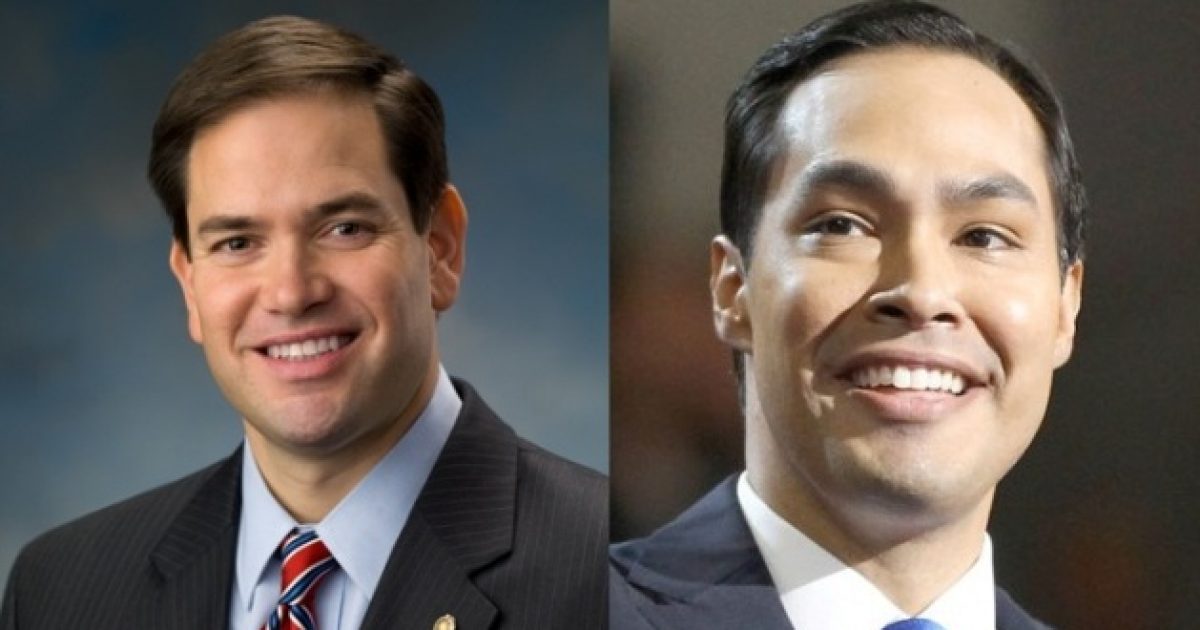 The Democrats’ “Great Brown Hope” For President in 2016?

Well, well, well, it appears the Democrat party is beginning to lay the groundwork for their ‘great brown hope’ to possibly counter a Senator Marco Rubio 2016 presidential candidacy- this ‘hope’  rests in none other than San Antonio Mayor Julian Castro.  Democrats featured Castro prominently at the 2012 Democratic National Convention to introduce him to the broader party in hopes that he would attract more Hispanics to the party.

After President Obama carried over 70% of Latino in the 2012 Presidential election, Castro would be a logical choice on the ticket to maintain that advantage.  But it’s not been widely disclosed that Castro is only now learning Spanish, and his mentor in this venture is non other than my ex-girlfriend’s look-alike, Eva Longoria.

Longoria is a self identified “ninth-generation” American whose Mexican ancestors came here in 1603(Keep in mind that the Mexican War of Independence did not occur until  1810-1821), but she’s also struggled in her attempt to learn Spanish.  To her credit, she speaks much more fluently than Castro does- in all honesty, sometimes my Spanish gets butchered by the fact that I speak and write English more than Spanish- use it or lose it, as they say.

Last year I had the opportunity to be a panelist on Univision’s ‘Meet the Press’, a political show that airs on Sunday mornings.  Prior to my pre-taped segment, host Jorge Ramos conducted an interview with Castro. Ramos is a native from Mexico who speaks fluent Spanish, but he had to conduct the interview in English because of Castro’s inability to speak Spanish.

But just who is Julian Castro?  One of Breitbart’s former writers, Charles C.Johnson authored a detailed expose on Castro and his twin brother Joaqin who are the byproducts of  racist upbringing by their mother.

Indeed, he, along with his twin, Joaquin, currently running for Congress, learned their politics on their mother’s knee and in the streets of San Antonio. Their mother, Rosie helped found a radical, anti-white, socialist Chicano party called La Raza Unida (literally “The Race United”) that sought to create a separate country—Aztlan—in the Southwest. – Breitbart

Interestingly enough, Longoria has also immersed herself in Chicano studies, and the Shark Tank wrote about Eva’s more than passing interest in subject-

For those of you unfamiliar of what Chicano studies are comprised of, Chicano studies is an academic discipline that focuses on “Mexican-American’ culture and history that originated in the 60′s and 70′s and was spurred on by the Black Liberation movement. In other words, it is another racially divisive belief system similar to Black Liberation Theology.

Longoria is not referring to herself as a “Chicana” from what we’ve gathered, but it is interesting to learn that she decided to seek her Masters Degree in Chicano Studies as opposed to a broader Latino Studies program that would encompass all Latino peoples- Venezuelans, Colombians, Mexicans-(Source- First Shark BiteLove at for Eva)

Isn’t it interesting that Castro, the Mayor of San Antonio, a city with a heavily weighted Hispanic population and home to many non-English speaking immigrants does not speak Spanish.

So how does the Mayor communicate with his constituents when he needs to get his message across to them?  Does he hire a translator?

Taking into account his radical socialist upbringing, the Castro brothers have more than a few things in common with another pair of Castro brothers that live 90 miles south of Key West.  As Marco Rubio is the son of Cuban exiles, a Rubio /Castro Presidential matchup will no doubt focus on the radicalism the Castro’s were raised on- an tyrannical ideology that countless numbers of Cubans fled to escape.