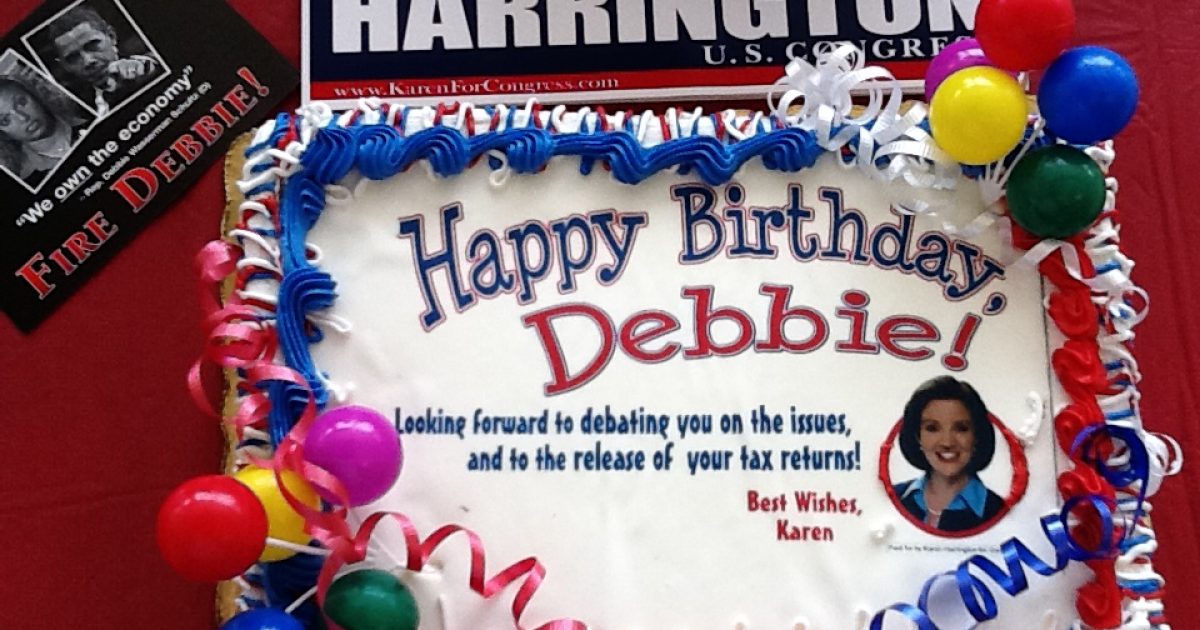 Today, September 27th is Congresswoman Debbie Wasserman Schultz’s 46th birthday, and her Republican congressional opponent Karen Harrington made it a point to not to forget the Congresswoman’s birthday.

Earlier this morning, Harrington delivered a birthday cake to Wasserman Schultz to celebrate the occasion along with a special birthday message for Debbie, that she is “Looking forward to debating you on the issues, and to the release of your tax returns!”

To this point in the campaign, Wasserman Schultz has ignored all requests for her to release her tax returns even as she continues to harass Republican presidential nominee Mitt Romney to release his tax returns.

Wasserman Schultz has previously told the Tampa Bay Times that she was not obligated to release her tax returns, citing the fact that she was not running for President. While it’s true that Wasserman Schultz is not obligated to release her tax returns, she has unmistakably identified herself as a middle class American, so why shouldn’t her tax returns be scrutinized to confirm whether the congresswoman really is middle class or part of the much maligned “1%.”

Here is the Harrington press release-

Today is Congresswoman Debbie Wasserman Schultz 46th birthday. In the spirit of political sportsmanship, I sent Debbie a personalized Birthday cake, expressing my best wishes to her on her big day.

This cake also serves as a reminder to Debbie that she continues to dodge my requests for five debates, as well as avoiding my numerous requests for her to release her tax returns.

Debbie claims to be “middle class.” So, by releasing her tax returns, Debbie will show that she truly believes in President Obama’s call for ‘Full transparency,’ and will be able to justify how a “middle class” American like herself can afford to take a thirty thousand dollar vacation cruise, drive two automobiles worth one hundred thousand dollars, and own two homes, including one in New Hampshire, that have a net worth of about one million dollars.