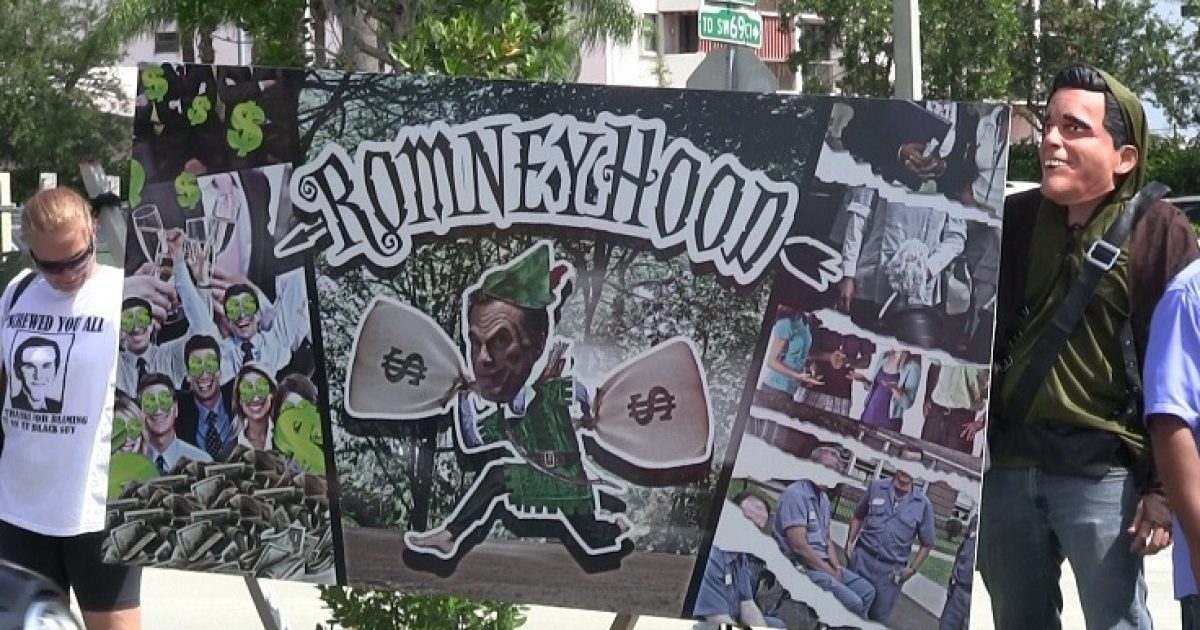 Moveon.org managed to round up about 30-40 supporters- some were armed with bullhorns, and almost all were mouthing incoherent racially-charged and anti-semitic rhetoric.  Maybe it was the blistering heat and humidity that prompted such obscene behavior, but you’ll have to watch the videos below to get a good grasp on the extent of the idiocy that these protesters spewed.

We decided to get right into the mix of things and ask some of these Moveon.org-ers some very easy questions about why they showed up to protest.

First we asked nice Caucasian lady about the t-shirt she was wearing with President George W. Bush’s face on it along with the phrase, “I screwed you all, thanks for blaming it on the black guy,” accompanying it.

Then we asked two younger ladies wearing Planned Parenthood t-shirts if they knew that their protest signs were inaccurate regarding  Governor Romney’s past employment at Bain Capital.  Apparently, these ladies did not realize that Romney had stopped working at Bain Capital back in 1999 because their signs stated that Bain Capital is currently “paying Romney millions, while workers get paid minimum wage.”

This last clip is by far the most telling as to how far gone the radical Moveon.org protesters are and  to what lengths the will go to  spread hatred and bigotry throughout society.

This unidentified protester shouted that “They(Romney supporters) goose-stepped along, just like the SS did.”

We then asked this brilliant individual to clarify his statement-

I would say that Ryan is more closely related to the SS than Himmler. Of course, he wants to get rid of Medicare, and then after all, the pesky old people they just get in the way, so, if we can send them to camp, there won’t be any running water, but it will be a real gas.”- unidentified Moveon.org protester