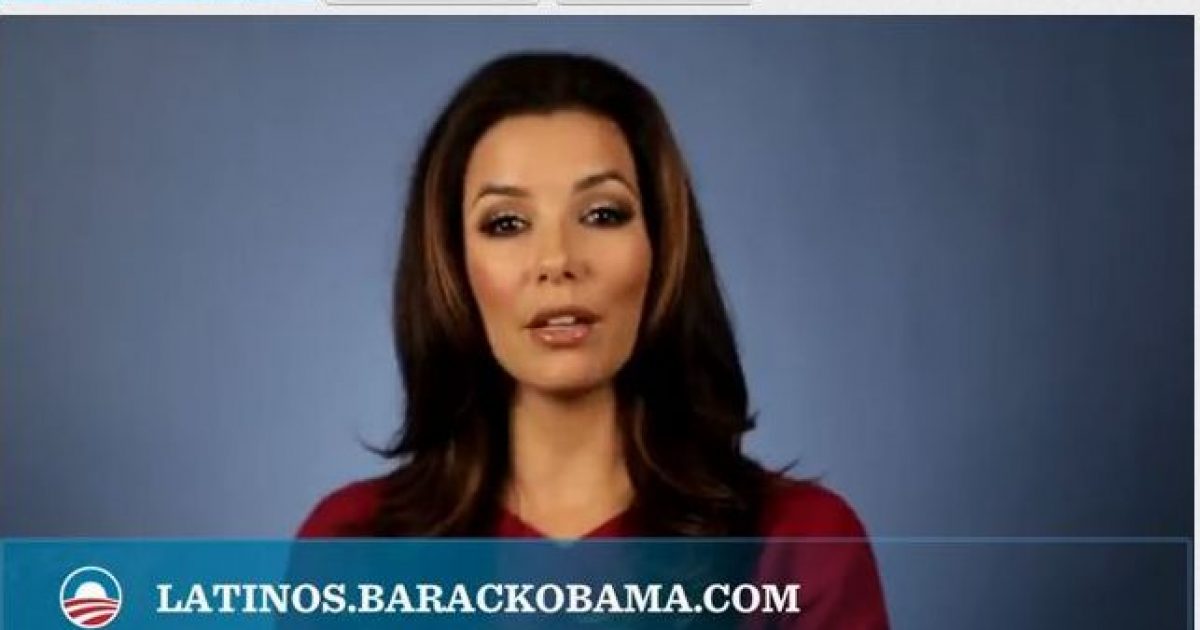 Longoria is one of President Obama’s National campaign co-chairs who hits the stump for the President on all matters ‘Latino.’ This weekend was no different, as Longoria continued to plug the President’s unpopular immigration policy that includes amnesty for illegal aliens, a measure that is not supported by the majority of Americans, regardless of their political affiliation.

After Longoria took several swipes at Republican Presidential nominee Mitt Romney, Longoria took some time to speak to reporters about Latino background and her involvment in President Obama’s 2012 re-election campaign.

We’ll assume that Longoria’s ancestors were Mexican since she has stated that she is Mexican-American.  If her family did arrive here in 1603 as Ms. Longoria states, the ‘here’ she speaks about would really be territory owned and controlled by Spain. The Mexican War of Independence did not occur until 1810–1821, so in reality, Longoria’s ancestors were really Spanish, right?


I asked Longoria if she knew why President Obama hand-picked her for Latino outreach, and if she represented Hispanics (Latinos) as a whole. Longoria disagreed with me, stating that she did not think she represented “all” Hispanics-

I don’t, I think that’s not true, I don’t represent Hispanics as a whole, I think we are very factioned group, a very different group, form our nationalities, there are Mexicans, Puerto Ricans and Cubans, and its not the “Latino Vote” we have to start thinking of us as Americans-we are all Americans.  Latinos think of the same top five issues as any other American. – Eva Longoria

For those of you unfamiliar of what Chicano studies are comprised of, Chicano studies is an academic discipline that focuses on “Mexican-American’ culture and history that originated in the 60′s and 70′s and was spurred on by the Black Liberation movement. In other words, it is another racially divisive belief system similar to Black Liberation Theology.

Longoria is not referring to herself as a “Chicana” from what we’ve gathered, but it is interesting to learn that she decided to seek her Masters Degree in Chicano Studies as opposed to a broader Latino Studies program that would encompass all Latino peoples- Venezuelans, Colombians, Mexicans-(Source-Love at First Shark Bite for Eva)

The real issue here is why President Obama would name Longoria as a national co-chair given her close ties and support of the National Council of La Raza (NCLR) and the Mexican American Legal Defense and Education Fund (MALDEF).  La Raza has made no secrets about its contempt of the “white culture and employs race-baiting tactics. MALDEF advertises itself as the law firm for the Latino community, but it actively attempts to undermine our immigration laws and its members are in support of the “Reconquista” movement whose goal is to foster a separatist ethnic movement in the southwest United States that ultimately declares its independence from the  United States and reunites itself with Mexico.

Check out Longoria’s very feeble attempt to cast Latinos as a victim group- while she speaking at a ‘La Raza’ luncheon (see clip below), Longoria impressed upon the crowd to support the Alma Awards- awards that exclusively recognize Latinos in the media, music and the film industry, implying that Latinos are denied “recognition” throughout the entire industry.

Longoria rants about “our community” and how not to be perceived as “angry Mexicans” and “a bunch of angry Puerto Ricans.”

Each time a Latino is single out and recognized for their talent, the image for Latinos changes for the better in the world and in the media. So what I am asking you to do is embrace it by watching it, because if you don’t watch, you don’t tune in, we cannot change the perception that this world and this country has about Latinos. So be sure you tell you family and friends of all colors to watch. –Eva Longoria

Given President Obama’s past ties to Reverend Jeremiah Wright and his Black Liberation Theology, why should we be surprised that his outreach to Hispanics and Latinos is through Longoria, with her racially divisive Chicano-studies background and associations?