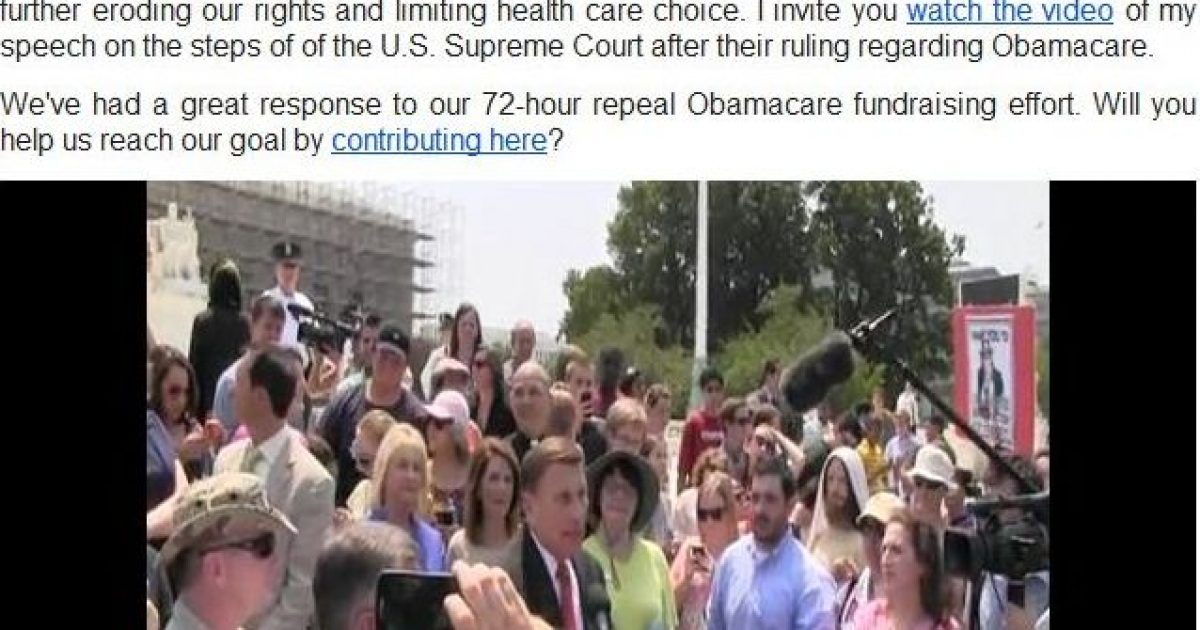 Just after the SCOTUS’ announced its decision to uphold the controversial ‘Obamacare’ legislation, members of the Congressional ‘Tea Party’ Caucus convened to express their frustration and dissent against the the U.S. Supreme Court.

Congresswoman Michele Bachmann (R-MN), who leads the Tea Party Caucus, was joined by Congresswoman Sandy Adams (R-FL), Congressman Jeff Landry (R-LA), as well as a slew of other caucus members to rail against the decision.

What was very peculiar, and an obvious move of desperation, was the appearance and participation on Congressman John Mica. Mica is not a fan of the ‘Tea Party’, not by a long shot.

A few months back we wrote about the growing ‘Tea Party’ problem that Congressman Mica was creating when he inexplicably decided to take a couple swipes at grassroots(Tea Party) activists.

“When it comes to the new guys, we are talking about amateur hour. These guys need help finding their way to the bathroom.”-Congressman John Mica (Mica’s “Amateur Hour” Congressional Freshman)

During a meeting with 10 Tea Party leaders in Orlando, Florida, Mica started off the meeting discussing the ‘How it works’ process in Washington, D.C. and stressed that “it takes time” for Representatives to effect change and move policy forward. Mica, who has been in Congress since 1993, is term limited out of his position as Chairman of the Transportation and Infrastructure Committee and it’s fair to say that he would be he is qualified to provide this “insight” on how Washington, D.C. really works.

According to one prominent Tea party activist that attended the meeting, Mica’s statement that, “You need me, you need guys like me to get things done” came across as a bit overconfident and showed that he was disconnected to the activist movement that has helped reshape the political landscape over the past several years.

Now more disturbing revelations about voter intimidation are coming out from Mica’s campaign. Just a couple of days ago, the Shark Tank first reported that Mica’s campaign was allegedly threatening Adams’s supporters, by telling them that their careers would be “ruined”, if they continued supporting the freshman congresswoman.

Well now there are more victims coming forward. Three more have come forward today to tell their stories, but all asked to not be named for fear of retribution by Mica and his campaign.

One activists said he/she was told that they “would no longer have a future in politics.” Another prominent activist was also told that her career would be finished, if he/she continued supporting Adams. But Mica is not the one calling these activists, its his staff and his wife. Yes, his wife is actively ‘reaching out’ donors and other.

If you liked this article, please share it.
0SHARES
ShareTweet