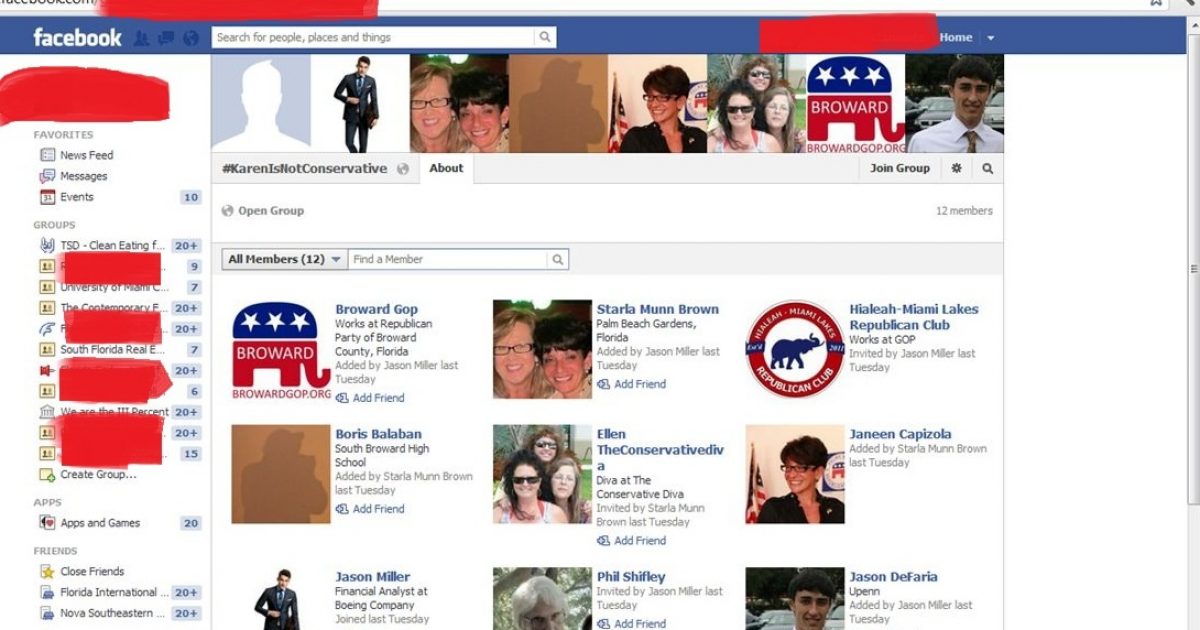 Harrington is positioning herself to defeat Democrat Congresswoman Debbie Wasserman Schultz in November’s general election, and Harrington finds herself the target of a BREC campaign that is actively seeking her defeat in her contested primary.

BREC Chairman Richard ‘Dick’ DeNapoli dislikes Harrington because she did not support his 2010 BREC Chairman’s race, a race that saw DeNapoli and his cohorts openly threatening  BREC in a pathetic attempt to garner votes or disuade members from voting for his opponents.

DeNapoli’s support across the county is razor thin, so much so that former supporters of his have been coming out of the woodwork to throw their once hailed ‘leader’ under the bus.

Below is a screenshot of the Broward GOP supporting a Facebook group that was set up by supporters and employees of Ozzie deFaria. Yes, the same Ozzie deFaria who was arrested a few years back for repeat Violence and Battery. Note that in order to be a member of this group you first have to ask to join the group and then wait to be accepted, and the Broward GOP Facebook page asked to be a member of the group.

The group’s name #karenisnotconservative, and it is anchored by a website that lists unsubstantiated allegations against Harrington and also posted a phony ‘mugshot’ of yours truly which deFaria has had to remove from the site after it was proven that deFaria illegally obtained my 2010 Florida driver’s license photo and used the picture to fabricate a phony mugshot, which may result in deFaria facing criminal prosecution.

As a result, deFaria has been taken completely off message and has unfortunately reverted to a more ‘scorched earth’ style campaign.

Also in the screencapture, you will see four very familiar group members listed.

The first is deFaria campaign staffer Starla Munn Brown. Brown first supported McCalister in the U.S. Senate race and then dumped him to support George LeMieux’s recently ended campaign for Senate. Brown and her fellow diminutive staffer Buzz Jacobs are famous for disseminating  libelous information on Twitter and Facebook.

Janeen Capizola is oddly another one of deFaria’s stooges that showed a lot of promise with her grassroots outreach until she aligned herself with Brown and Ellen Snyder.

Ellen Snyder is one of the more questionable political grassroots operatives in Palm Beach County. Also known as ‘Conservative Diva‘, Snyder is best known for equating Senator Marco Rubio to President Obama. Snyder made her bones in politics the good ol’ fashioned way- by threats and character assassination.

Then you have  Boris Balaban, Congressman Allen West’s photographer and wannabee videographer/writer, who is assumed to be on the deFaria for Congress payroll.

It is hard to comprehend why these characters promote deFaria and his website consisting of unsubstantiated allegations against Harrington and a doctored up phony mugshot using an actual Florida Driver’s License of a private citizen and yet do not flinch at the glaring fact that deFaria, the candidate seeking to represent South Florida in Congress was himself arrested for ‘repeat’ violence and battery.

So now the truth is out- the Broward GOP, once again, is actively working against Republican candidates rather than remaining neutral in a contested primary, and hence all future claims its current members make about “supporting all Republican candidates” should not be taken seriously.

**Update-As expected, DeNapoli has pulled the Broward GOP from deFaria’s site. Too late, everyone knows what they did.

**Second update-Expect DeNapoli to say that ‘someone’ added the Broward GOP to this site. Yes, they were added, but the admin of the Broward GOP had to accept. In addition, everyone on Facebook is notified when they are added to a group, right? Also, if they were ‘just added’, why weren’t there more people added? Again, even if you are added to a group, you have to accept.