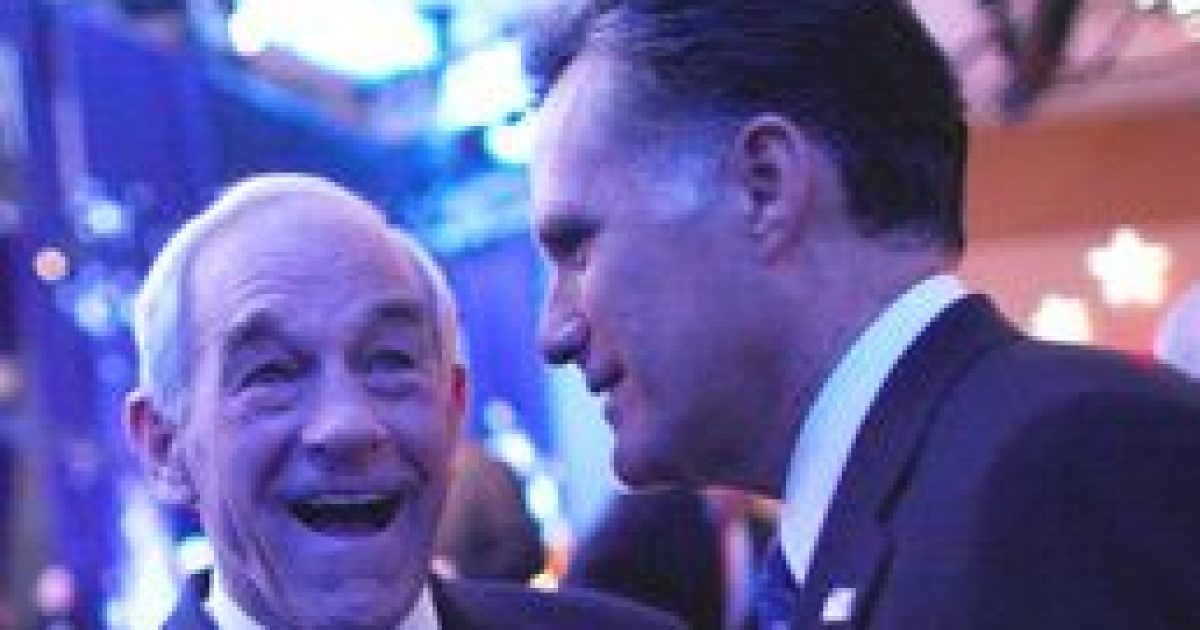 The Romney/Paul Alliance- Don’t Call it a Sellout?

Speculation is increasing by the hour about the nature of the relationship between presidential candidates Mitt Romney and Ron Paul.  Over the past couple of weeks, reports have claimed that their relationship is a very “warm and friendly“ one, but now there is increasing speculation that the two are moving beyond mere friendship and into a political alliance for strategic purposes that would benefit them both in different ways.  Some say that Paul is largely avoiding criticizing Romney while taking dead aim at rivals Rick Santorum and Newt Gingrich in both the debates and in his campaign spots.

Part of this may be a purely logical political calculation on Paul’s part, as his advisers likely know that Paul, Santorum and Gingrich are largely competing for the same bloc of conservative/libertarian Republicans.  But speculation is increasing that the two may have reached a behind the scenes agreement that could have implications for the eventual Republican Party platform or have other considerations- like consideration for an appointment in a Romney Administration.

On the surface, tapping Paul as veep might not make sense. But conservatives are refusing to go along and eat the dog food with Romney — and adding Rand Paul to the ticket would fire conservatives up – and ensure that Ron Paul drops any plans to launch a 3rd party challenge. And just imagine if Romney arrives at the GOP convention needing some of Paul’s delegates to win the nomination?

It’s not an absurd idea.

A Romney/Rand Paul ticket would certainly pose a massive conundrum for Ron Paul’s hard-core supporters.  There’s no doubt that a decent number of Paul’s supporters would be livid beyond all human understanding because their political heroes would effectively be selling out to the notorious “Republican Establishment,” a move that would be anathema to many of the Pauls’ purist followers.  But it’s also likely that some of Paul’s more politically calculating supporters would view this an important opportunity to effectuate change within the Republican Party, influence policy, and obtain positions of influence within a Romney Administration.

Barring an admission of an agreement or alliance from either Romney or Ron Paul, the only thing that’s certain is that things are genuinely friendly between the two- and it’s possible that it may not be anything more than that.  But what do Ron Paul’s supporters think about a political alliance between the “Massachusetts Moderate” (Gingrich’s characterization of Romney) and “The Champion of Liberty” (what Paul refers to himself as)?  Is this a political sellout of epic proportions by Ron Paul?  Is it a purely political calculation that will benefit both Romney and Paul as well as advance their agendas?  Or is all of this speculation foolish and misleading as to what’s really going on?

Answer the poll questions below.