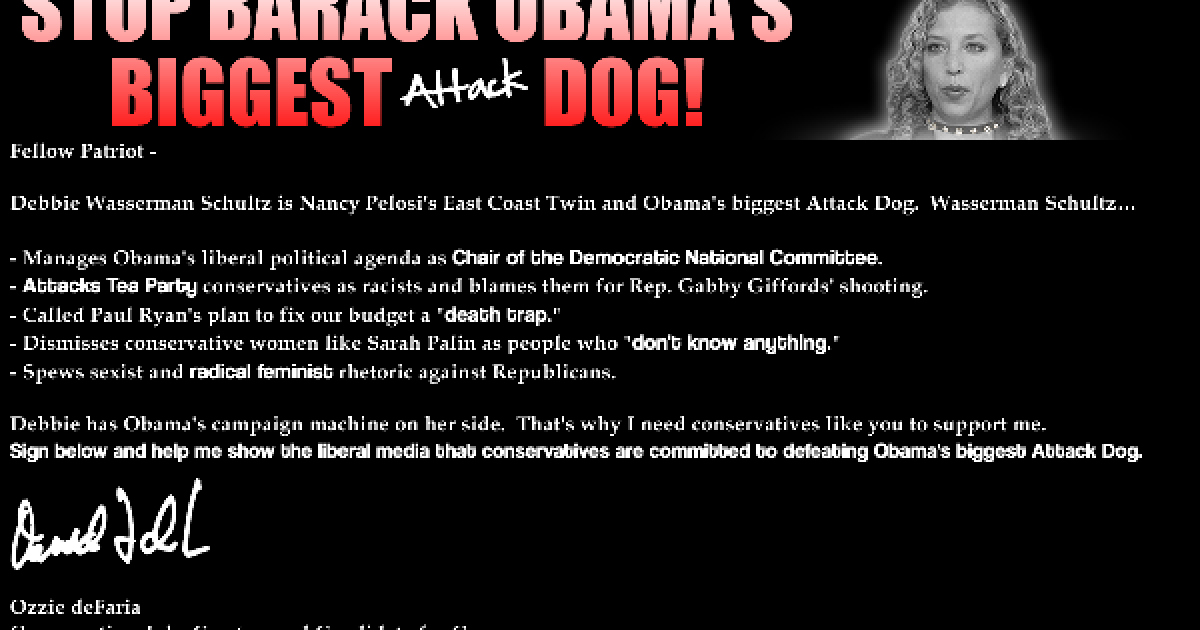 While 2010 nominee Karen Harrington enjoys significant name recognition and strong grassroots support, deFaria could pose a real threat because of his ability to self-fund, and his new found support from the Republican establishment in Washington, D.C. will likely assist his fundraising.

But while deFaria has proven that he is a successful businessman and is showing a glimmer of a fundraising prowess, he’s also at times shown that he lacks the discipline and judgment needed to serve in Congress.

Case in point- deFaria inexplicably posted an image on his website in which he super-imposed a dog collar around the neck of Congresswoman Debbie Wasserman Schultz.  It’s understood that political candidates use gimmicks and stunts to bring attention to their campaign, but the denigrating depiction of Wasserman Schultz as a dog isn’t very smart, and it’s likely that most women won’t be amused.

deFaria’s  move is reminiscent of an incident back in 2009 in which another Republican congressional candidate who was looking for attention scribbled the initials ‘DWS’ on a gun range target and then proceeded to fire at it- right in the presence of the assembled media.  The actions of that night gave the GOP a black eye, and deFaria’s actions are likely to have a similar effect.

When you couple this substantial gaffe with a statement he made at the recent Southern Republican Leadership Conference (SRLC) in South Carolina where he stated, “we must send her back to the pound,” it’s clear that deFaria is fixated on the ‘Debbie is a Doggie’ motif, but is that really an intelligent way to critique her?

deFaria hypocritically calls Wasserman Schultz a sexist on the website (see picture), and fails to understand that his depiction of ‘DWS’ can be interpreted as exactly that, sexist.

Unfortunately for deFaria, it doesn’t end there. In the same video clip (below), just before he states that ‘DWS’ must be sent back to the pound, deFaria, reading from a scripted speech, untruthfully states why Congressman Allen West called Wasserman Schultz ‘vile and despicable.’ deFaria states that West called her ‘vile’ specifically because Wasserman Schultz blamed the Tea Party for the shooting of Congresswoman Giffords.

This type of shameless pandering is nothing more than a stunt to create the perception that deFaria is aligned with West.

West  called out Wasserman Schultz after she spoke out against him on the House floor inWashington,D.C.

When you run Congress or any office for that matter, most everything is going to be on the table.  deFaria, like many other Americans, has had run-ins with the law and has been party to several litigations that have been made public- some good, some bad. Here is a short list of deFaria’s public court records:

Now either the NRCC didn’t bother to closely vet deFaria or they are fine with deFaria’s “colorful” background- which do you think is most likely? What do NRCC members Pete Sessions, Paul Ryan, Kevin McCarthy, and Eric Cantor have to say about this?


Were deFaria to win the Republican nomination to take on Wasserman Schultz, you better believe that the Democrats will use his unfortunate lack of judgment to label all Republicans as extreme sexists- and deFaria would be the proverbial Republican punching bag .