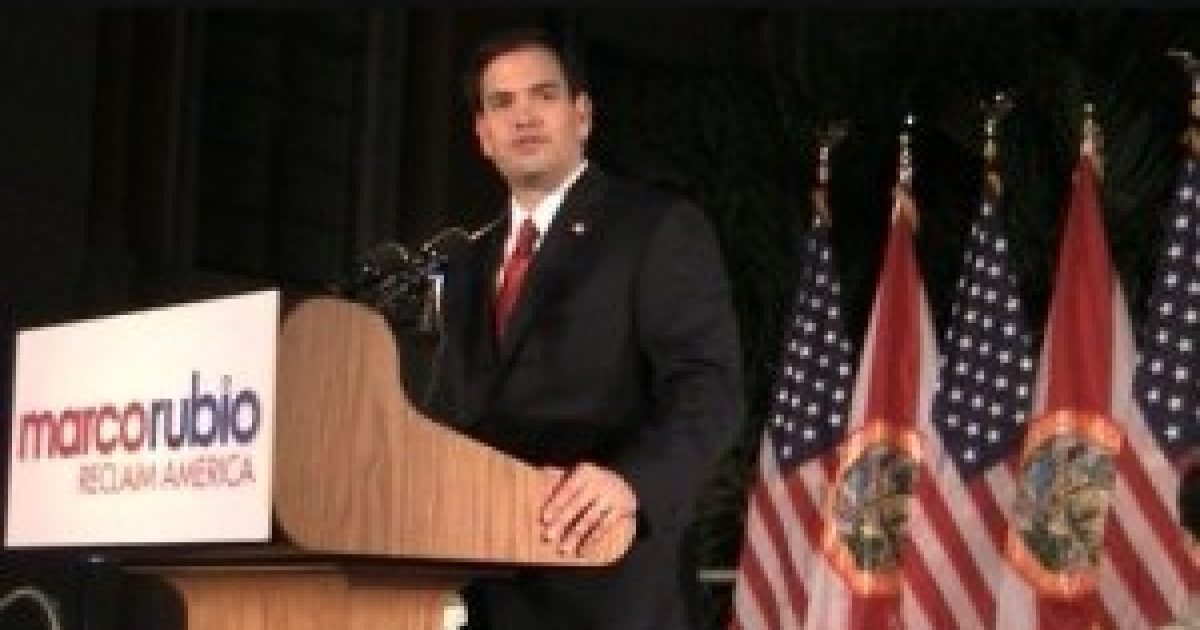 Senator Marco Rubio recently delivered a compelling and emotional speech on illegal immigration at the annual Hispanic Leadership Network meeting, but Rubio may have left many in the room, and perhaps across the country wondering if this speech marked the beginning of a ‘softening’ by Rubio on this important issue.

At the very beginning of his speech, Rubio was heckeled by pro-Dream Act activists, who were there in protest of the Senators hard-line views on immigration, making the case for his continued anti-amnesty position.

During the course of his remarks, Rubio stated that there is “broad bi-partisan support for a notion that we should somehow figure a way to accommadate them (Dream Act Kids).”(VIDEO)

While Rubio has come out in opposition to the Dream Act, Rubio has always questioned what is to happen to the children who were brought here to this country illegally by their parents.

Rubio campaigned on a pro-legal immigration platform and thus far he has been staunchly against any form of amnesty for illegal immigrants, but he has hit a couple of bumps along that road that give immigration hawks cause for concern.

During his 2010 Senatorial campaign, Rubio was slammed by pro-illegal immigration contingency when he made this controversial statement critiquing the Arizona Immigration law:

States certainly have the right to enact policies to protect their citizens, but Arizona’s policy shows the difficulty and limitations of states trying to act piecemeal to solve what is a serious federal problem. From what I have read in news reports, I do have concerns about this legislation. While I don’t believe Arizona’s policy was based on anything other than trying to get a handle on our broken borders, I think aspects of the law, especially that dealing with ‘reasonable suspicion,’ are going to put our law enforcement officers in an incredibly difficult position. It could also unreasonably single out people who are here legally, including many American citizens. Throughout American history and throughout this administration we have seen that when government is given an inch it takes a mile.-Senator Marco Rubio

Rubio’s Senate campaign took heavy criticism for this statement and immediately went into damage control mode to try to mitigate the fallout. Rubio immediately back-peddled and the damage was limited.

But earlier in his political career when he was Speaker of the Florida House, Rubio was labeled as being “pro-amnesty” for illegals when he blocked the passage of six immigration reform bills that were to be heard in committee. Rubio stated that these bills did not make it out of committee, and he noted that a similar bill introduced in 2009 also never made it out of committee.

Congressman David Rivera (R-FL), one of Rubio’s closest friends from his days in the Florida Legislature has introduced the Adjusted Residency for Military Service Act — the ARMS Act. It’s a variation on the DREAM Act, which would grant legal status to some children of undocumented immigrants who came to the U.S. illegally.-Miami Herald


There is now talk that Rubio may co-sponsor the measure in the Senate, a move that will undoubtedly set off a backlash from Tea Party and other grassroots groups against the Senator.

Marco Rubio supports the military component of the Dream Act, but the problem for Rubio is that this measure is another form of amnesty and it would wholly discredit him as being against any form of amnesty for illegal immigrants. Rubio believes that citizenship is only granted to those illegals who get discharged from the Armed Forces with an Honorable Discharge, but both Rivera and Rubio are completely disconnected with the unintended consequences that will fall upon the country if this measure is adopted.

Let’s raise a couple obvious, and not so obvious questions about the this Military-only Dream Act.

First of all, how is this going to be paid for? If you have 100,000 illegal immigrants that attempt to enlist in the armed forces, where will they serve, especially in light of the drastic military cuts that President Obama has proposed?

Of those 100,000 illegals that enlist, how many will wash out of their respected Basic Training programs? As of 2006, the wash-out rate for enlistees in the military is as follows:

What do we do with those 13.6% of Army wash-outs, or 14% of the Navy’s wash-outs? Do we offer them a consolation prize for not being able to serve the opportunity to gain U.S. Citizenship?

Aside from the high wash-out rate and the shrinking military, what about those illegal immigrant soldiers that receive a ‘General’ discharge, as opposed to an Honorable Discharge?

General discharges are given to service members whose performance is satisfactory but is marked by a considerable departure in duty performance and conduct expected of military members. Reasons for such a characterization of service vary, from medical discharges to misconduct, and are utilized by the unit commander as a means to correct unacceptable behavior prior to initiating discharge action (unless the reason is drug abuse, in which case discharge is mandatory). A commander must disclose the reasons for the discharge action in writing to the service member, and must explain reasons for recommending the service be characterized as General (Under Honorable Conditions). The service member is normally required to sign a statement acknowledging receipt and understanding of the notification of pending discharge memorandum. They are also advised of the right to seek counsel and present supporting statements.

In addition, service members are required to sign documents acknowledging that “substantial prejudice in civilian life” may be encountered under a general discharge.[2] Despite this, some personnel think because the discharge is described as general under honorable conditions, it is as good as or the same as an honorable discharge. Concerning VA disability and most other benefits that is true; however, a general discharge may preclude participation in the GI Bill, service on veteran’s commissions, and other programs where a fully honorable discharge is required. However, one state, Illinois, prohibits discrimination against a veteran from housing or employment on the basis of unfavorable discharge from military service per the Human Rights Act of 1970.-Wikipedia

Another question to consider is the following- how long does an illegal immigrant have to serve before he or she is ‘Honorably Discharged’ and receives their citizenship- is it 2 years, 4 years, 6 years, or more? And what if the soldier decides to make the military a career, what then? Do ‘what if’?’ provisions need to be added to the agreement regarding extended military service?

Another question- once these illegal immigrants become citizens by virtue of their military service, will they be allowed to immediately request the rest of their families?

Senator Rubio, Congressman Rivera, and others who support this military amnesty measure seem to be completely blinded by the rantings and pressures coming from the pro-amnesty lobby, and their support of this measure could very well help open an ominous “Pandora’s Box” of future amnesty measures.