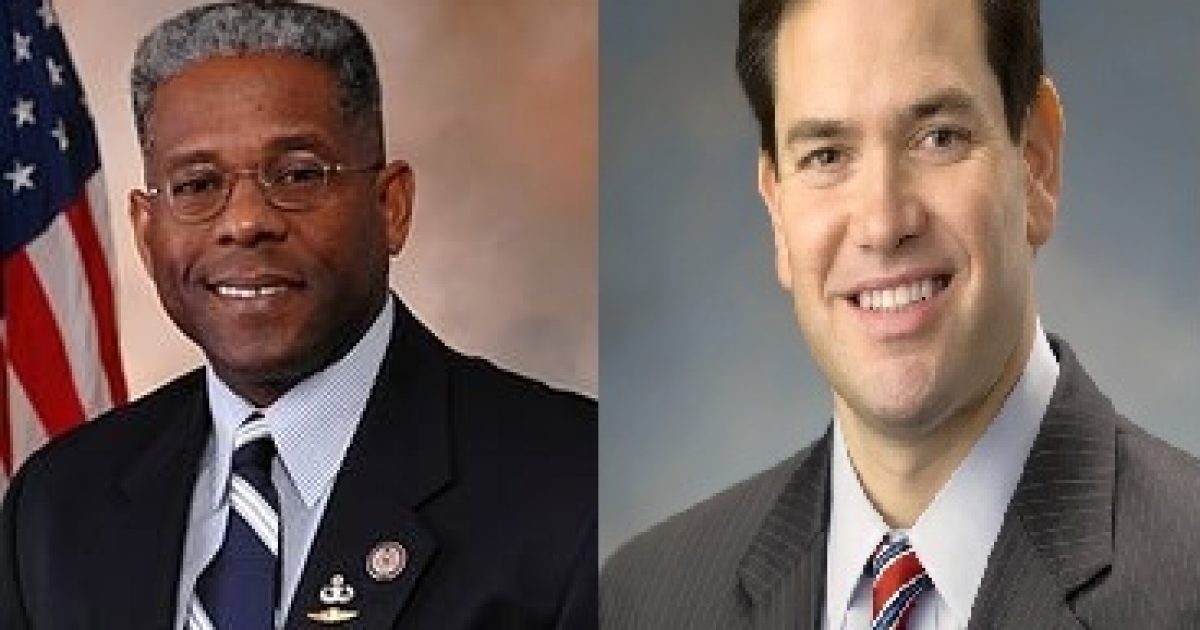 Is a political alliance between Senator Marco Rubio and Congressman Allen West just  around the corner?  Considering the partisan divide and lack of cooperation between  the two Houses of Congress over the past year that has stalled efforts to pass legislation that would aid our economic recovery, such an alliance could help shift some momentum that helps to break the legislative logjam that presently exists.

According  to West, the House of Representatives has passed at least 30 pieces of   legislation that would aid our economy recovery and eliminate harmful regulations, but these bills are sitting dormant over at the Senate at the orders of Majority Leader Harry Reid.

West has previously said that he was “very appalled “with the Senate’s two- month payroll tax extension because it wasn’t “good policy,” and was simply a short-term political gimmick.  When asked if he had reached out to members of the Senate, namely Senator Marco Rubio, West stated he had not yet spoken to the Senator, and added that, “We have not had that discussion, but that is something that needs to happen.”

Earlier in the year, Senator Rubio had told the Shark Tank that he could work with West, and now one of Rubio’s top aides is stating that Rubio feels that “there are a lot of things that he (Rubio) and Allen West agree on,” and that he would work with West and others to advance the principles and policies he campaigned on.

When asked why the Senate continues to filibuster legislation that has already passed the House,  the aforementioned Rubio aid told the Shark Tank the following:

“The reason House bills rarely get votes in the Senate is because Harry Reid and Senate Democrats have the majority and control the agenda. They call votes on what they want and what they deem to be politically advantageous to them.

For example, when they brought up the Ryan budget, they didn’t bring it up because they care to save Medicare or take steps to address our debt. They cynically brought it up because they believed it was a political liability and wanted to put Senate Republicans on the record.  That’s why it’s important that, in addition to winning the White House and holding the House majority, we need to elect conservatives to the Senate.” -Top Rubio aid

Rubio’s Reclaim America PAC was formed last year help identify federal candidates, particularly candidates for U.S. Senate that would advance the conservative cause and oppose the reckless Obama agenda.  This potential alliance between two of the most influential “new guard” Republicans could very well signal that Republicans are beginning to unite their efforts to advance their agenda and to defeat President Obama and the Democrat political establishment which is still clinging to power in the Senate.