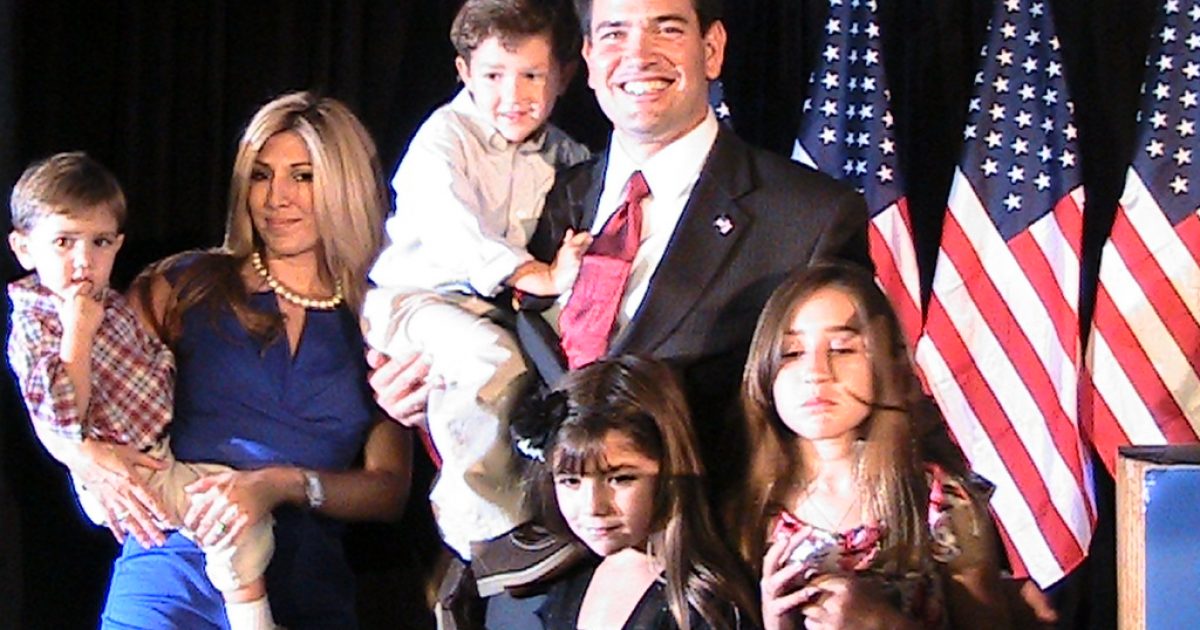 The Washington Post’s futile attempt to smear Senator Marco Rubio is little more than a desperate attempt to tarnish a rising star within the Republican Party who possibly could become the first hispanic President of the United States or a potential VP candidate in 2012. The fear that partisan journalists in the mainstream media is palpable- they fear a young, articulate, conservative Republican with superior communication skills whose message will resonate with Latinos and Hispanics.

Some questions about the hit piece jump out immediately- why didn’t the Post bring this information out during the 2010 election cycle? Does this mean that the Post ‘slipped’ in it’s investigative journalism, by failing to uncover Rubio’s alleged exaggerations much earlier?  Have they known about these alleged inconsistencies all along and simply decided that the story wouldn’t have received any traction during the campaign but would after Rubio won his Senate race, and potentially alter a VP bid during the 2012 election cycle?

So what is the big deal? Rubio has stated that his parents left Cuba to escape the Castro Regime in 1959 or 1958, but it turns out they really left Cuba in 1956. They did leave Cuba in 1956, however Rubio’s mom and older siblings returned to Cuba a couple of years later to assess the living situation in Cuba, but upon realizing the gravity of what was happening and the consolidation of Castro’s power in Cuba, they decided to return to the United States after spending only one month in country.

The family started the process of becoming U.S. citizens after realizing that Cuba was slipping into the abyss of Communism, but the Washington Post is trying its best to make it appear that Rubio lied about why and when his parents left Cuba.

“To suggest my family’s story is embellished for political gain is outrageous. The dates I have given regarding my family’s history have always been based on my parents’ recollections of events that occurred over 55 years ago and which were relayed to me by them more than two decades after they happened. I was not made aware of the exact dates until very recently.

“What’s important is that the essential facts of my family’s story are completely accurate. My parents are from Cuba. After arriving in the United States, they had always hoped to one day return to Cuba if things improved and traveled there several times. In 1961, my mother and older siblings did in fact return to Cuba while my father stayed behind wrapping up the family’s matters in the U.S. After just a few weeks living there, she fully realized the true nature of the direction Castro was taking Cuba and returned to the United States one month later, never to return.

“They were exiled from the home country they tried to return to because they did not want to live under communism. That is an undisputed fact, and to suggest otherwise is outrageous.”

Rubio contends that his parents did not tell him the exact times and dates of the chain of events regarding their exodus from Cuba back in the late 1950’s. Again, what is the big deal? Rubio’s parents did leave Cuba in 1956, planned to return, but upon their return to Cuba, Rubio’s mother realized that their dreams of returning to the island were gone thanks to Castro, and they left their homeland permanently.  So if anything, the Rubio family actually fled Cuba in 1961, and not in circa 1958-59, as Rubio first stated.

Marc Caputo from the Miami-Herald added this about the matter:

To back up the lead, the Washington Post excerpts from a 2006 address in the Florida House where Rubio said “in January of 1959 a thug named Fidel Castro took power in Cuba and countless Cubans were forced to flee… Today your children and grandchildren are the secretary of commerce of the United States and multiple members of Congress…and soon, even speaker of the Florida House.”

Regardless of when his parents left Cuba, they were exiles because they stayed in the US, specifically Miami, in a community where they soon felt they couldn’t go back to their homeland. Though the story said his parents left for economic reasons, it’s silent over the fact that the dictator before Castro, Batista, was so brutal that it made Castro look like a good alternative at first. Read more here: Miami-Herald

At the worst, Rubio mistated some trivial facts that he thought were true about a chain of family events that occurred over 50 years ago- facts about his family that even he wasn’t aware of.  The Washington Post could have stated that the Rubio family fled Cuba in 1961, which would have been just as accurate.  Just like Univision’s dumpster diving report on Rubio mere months ago, the Washington Post is trying to create a stink about a matter which reveals far more about their lack of journalistic integrity than it does about Rubio’s supposed lack of candor.