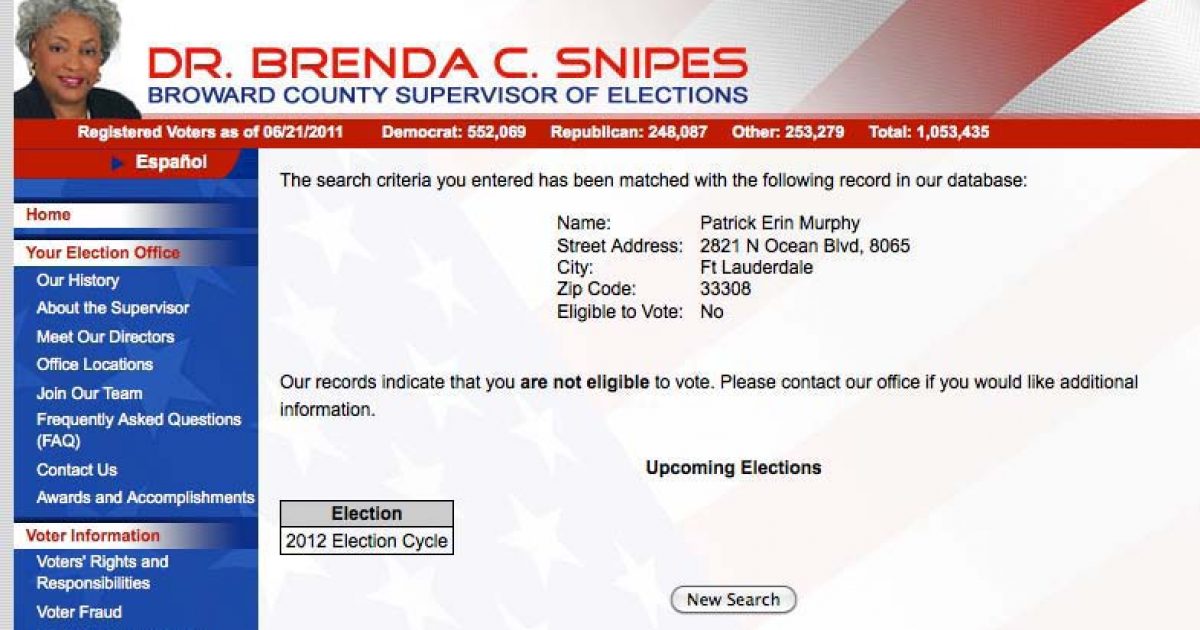 As a followup to our piece on Democrat candidate for Congress Patrick Murphy and his campaign disclosure problems, a subsequent search of the Miami Dade Supervisor of Elections records shows that Murphy was a registered Republican in Miami-Dade county from 2004 up until January of 2011 and he cast his vote in the 2010 elections as a registered Republican.  Murphy changed his party affiliation from Republican to Democrat mere months ago- on January 10, 2011, according to the Miami-Dade Supervisor of Elections.

Murphy is running for Congress in Congressional District 22, which spans over both Broward and Palm Beach Counties. Murphy is now a resident and registered voter  in Broward County, but interestingly enough, he is not eligible to vote within the county according to the Broward Supervisor of Elections.

It is possible that Murphy has conflicting voter registration information in both Miami-Dade and Broward counties that is preventing him from being eligible to vote in the county where he currently resides.  But what’s most revealing about Murphy’s party switch is that given its proximity to the announcement of his candidacy for Congress, it appears that it was done much more for political expediency than for any other possible motive.


In a phone conversation I had with the Miami-Dade Supervisor of Elections at around 4pm on 6/21/2011, both a staffer and her Supervisor indicated to me that Mr. Murphy voted  in the June 28, 2011 Miami-Dade Special election.  This disclosure prompted me to inquire as to how he could have done so if, according to their own admission and public records, Mr. Murphy is listed as ‘moved out of county’ on 3/10/2011.  I asked how this designation was possible, and I was informed that “he could have voted absentee, or something else could have happened,” whatever that means.  On top of this troubling disclosure, Mr. Murphy is also registered to vote in Broward County Florida as of  April 2011, but his current status is indicated as “not eligible to vote”.  Both the Supervisor and I agreed that their was something wrong with Murphy casting a vote in the Miami-Dade election, per the phone conversation.

The a phone conversation provided more questions than answers, so I decided to physically inspect the voter registration records earlier this morning (6/22).  Upon reviewing the documents, Mr. Murphy’s status for the June 28 Miami-Dade Special Election was coded as ‘Ineligible Voter (N101)’, which is a very curious fact for the simple reason that the day before, the Supervisor confirmed to me that Mr. Murphy voted in the special election but was now considered an “Ineligible Voter”- raising even more questions about a possible voter fraud cover up by the Miami-Dade SOE. VIDEO: Miami-Dade SOE-Murphy Voting History

More on this matter is sure to follow…
0SHARES
ShareTweet