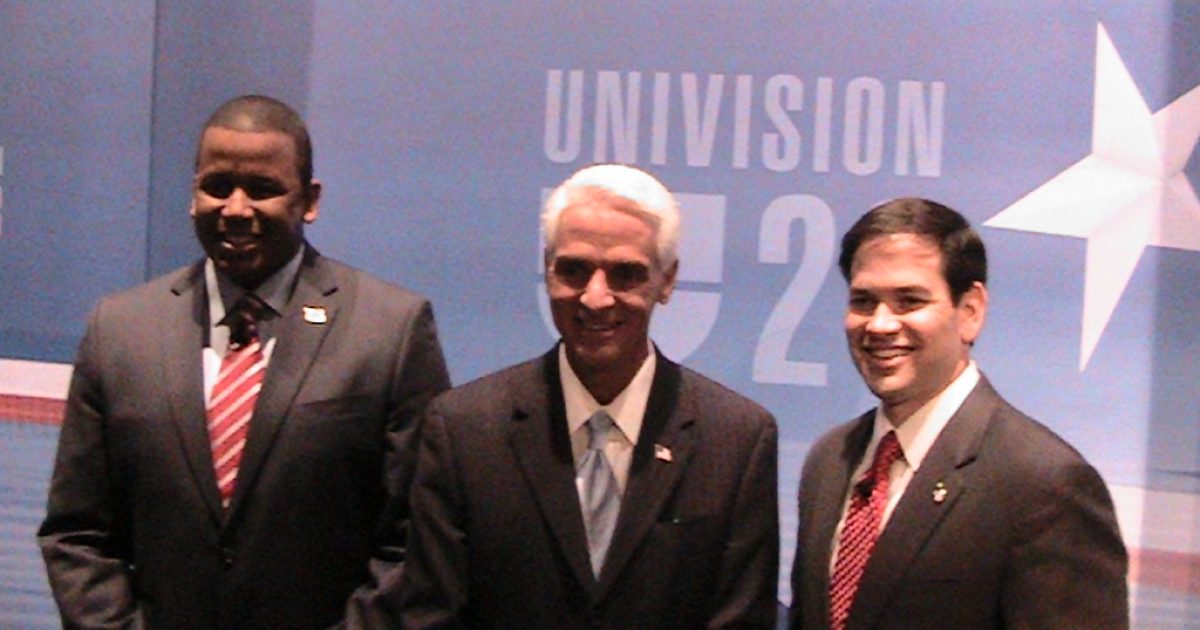 Your crack reporter, El Sharko is live at the first of the highly anticipated Senate debates between Governor Charlie Crist, Congressman Kendrick Meek and Fmr. Speaker Marco Rubio.  Recent polls have Rubio up by double digit lead over his opponents and is already being touted as the next U.S. Senator from Florida.

I will do my best to bring you accurate and up to the minute play-by-play of today’s debate.

Crist “polls dont mean much to me””

Meek “I stand with the people of florida”

Rubio “The US  is the single greatest country in the world”

Rubio “there is no investigation, all expenses were political”

What is your plan to create job for the unemployed in Florida?

Meek-” Stimulus was created to keep us out of depression”

Crist- “we have to cut taxes and spending.

Rubio “Foreclosures are spreading because people don’t have jobs”

If elected, would you support legislature amnesty-how about the existing illegals in the country?

Rubio ” we have to establish border security with Mexico . 2nd establish E-Verify”

Meek ” Disappointed  Senate has not taken up immigration reform”

Crist ” we need a pathway to citizenship, we are a nation of immigrants”

Will u support someone born in state receiving citizenship-Dream Act?

Crist “14th amendment should stay as it is…born in the USA, you are an American”

Crist ” the Law is bad..police state”

Harry Reid- Dream Act. Are you in favor of the Dream Act?

Crist I support the dream act..support it being attached to the military bill”

Crist -”  I would have voted against it-to big, too expensive”

Meek” I voted for the healthcare bill”

Rubio ” Cuba is not a friend”

Crist ” support the embargo.. I agree with the administration that families should be able to visit Cuba, it is just”

A law making English as the official language?

Crist ” allows to a pathway to citizenship..I don’t support law”

Meek “I do not support anyl aw keeping people from speeking Hebrew, Spanish…”

Rubio “everyone in America  should speak English.. should be the offical language of the United States”