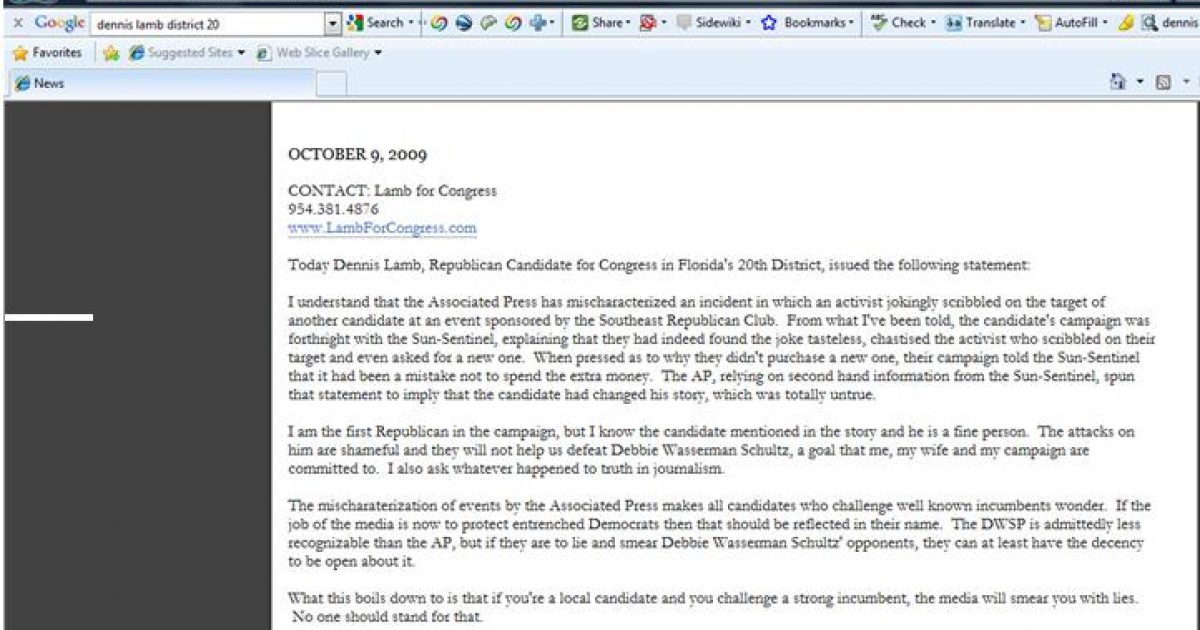 Tea Party Candidate Robert Lowry- Does He Have the Character for Congress?

The Tea Party movement began to sweep across the nation almost immediately after President Obama took office and started aggressively pushing his socialist agenda.  The Tea Party movement itself is a true grassroots movement borne out the American spirit of freedom, resistance to tyranny and expanding government, and American exceptionalism.

Congresswoman Debbie Wasserman-Schultz has announced that her party’s strategy for the midterm elections will be to aggressively push the narrative that almost all GOP candidates are tea party extremists, and she will campaign aggressively with this message to take out as many Republicans as possible- the writing has been on the wall for months.

Unfortunately, the Democrat Party was presented with a bow-tie wrapped gift last year when one of the Republican candidates in District 20-  self professed Tea Party candidate Robert Lowry- attended an event at a shooting range where he and his campaign manager Christopher Leggatt scribbled the initials ‘DWS’ on a shooting target.  Lowry proceeded to shoot at the target and joke about his actions to all that were in attendance, and he also posed for a picture with the bullet riddled target.  Making matters worse, all of these actions were done in the presence of a local political beat reporter.  The backlash of Lowry’s actions reverberated throughout the national media, and the blowback not only targeted him, but the Republican Party as a whole.

This terribly embarrassing lack of good judgment by Mr. Lowry has brought the question of character front and center. Many politicos currently running for both state and federal office, along with their campaigns, as well as local GOP leaders have expressed concern with the possibility that Robert Lowry may win the FL-20 primary race, this giving the Democrats exactly what they want- a poster boy for unhinged right-wing extremism that can be used to tar and feather other GOP candidates.  Off the record, almost all of these politicos are hoping that Lowry loses this race, and their concern about Lowry was made apparent at the past Lincoln Day Dinner hosted by the Miami GOP, where no less than nine of these politicos were quick to distance themselves from Mr. Lowry, while their staffs kept a watchful eye as to prevent the possible campaign ending photo-op with Lowry.

Interestingly enough, at a recent Wasserman-Schultz/ Kendrick Meek event, several prominent Democrat politicos jubilantly expressed this same sentiment to me, as one of them stated to me anonymously, “we would love for him(Robert Lowry) to win.”

The question of judgment, or the lack thereof by Lowry’s campaign is also an open matter.  An example of Mr. Lowry’s questionable judgment is also called into question by people that are directly and indirectly helping his campaign. There have been a slew of gaffes and mistakes that Lowry, his campaign, and his closest allies have made over the past year or so.

Below is a comprehensive accounting and documentation of the Lowry Campaign’s noteworthy incidents and gaffes during this election cycle.

Robert Lowry refuses to admit that he was responsible for writing the initials ‘DWS’, even as numerous people watched him and Chris Leggatt do so. Lowry then let former Congressional candidate Dennis Lamb publicly state a lie for him. Lamb’s press release stated “they had indeed found the joke tasteless, and chastised the activist that scribbled on their target.”

Here is a list links that documented this incident- it’s clear that this misstep went viral and it cast a shadow over the entire Tea Party movement.

The Lowry campaign is under scrutiny for violating FEC rules and regulations over their flawed election cycle reporting. Several FEC complaints have already been filed, and more are expected to follow. Pictured is a banner used by the Lowry campaign to promote Mr. Lowry candidacy. What is not written on the banner is the mandatory disclaimer.

Lowry for Congress has also received numerous corporate donations – a big no-no when one is  running for Federal elected office. One noticeable point here on the report is that Bunny Hills Assisted Living Facilities donated $7000 to the campaign. Bunny Hills Assisted Living Facility is owned by Lowry Group Properties, Inc. (Sunbiz.org) – potentially a major violation.

Lowry Properties,Inc  d/b/a Sunny Hills Assisted Living Facility, Inc-Defendant.  Lowry Group Properties, Inc. is owned by Robert Lowry, one of several GOP candidates for U.S. Congress in Florida’s Congressional District 20, and Lowry is also mentioned in the suit. Here is a Copy of the Lawsuit

The Lowry Campaign and its supporters

Christopher Leggatt– Campaign Manager of the Lowry for Congress campaign. From what has been reported, he has been actively been trying to strong-arm an endorsement from the Broward Executive Committee for Lowry.  Much to many people’s amusement, Leggatt has consistently referred to Lowry, without any hint of humor or irony, as “The Congressman” since the beginning of their campaign.

Chad Lincoln– Mr. Lincoln is the chief advisor/consultant of the Lowry campaign, and he is also a major campaign donor.  Lincoln has donated $2450 this election cycle- $50 dollars more the maximum allowed to donate to a candidate per election year, perhaps a simple an oversight on his part.  Lincoln is at the forefront of promoting the Lowry campaign whether it’s on Facebook or other new media channels.  Mr. Lincoln is also under investigation for tortuous interference with a contract.

Scott Spages is a member of the Broward Republican Executive Committee and is the Director of the Calvary Chapel Faith Forum that meets at least once a month to discuss faith and politics. Calvary Chapel is a Fort Lauderdale-based Christian worship center that is highly respected in the community, as well as outside Broward County. Mr. Spages is also under the same investigation of Tortuous interference with a contract as  Mr. Lincoln.

Here is a link to our article about the first FL CD 20 debate. VIDEOS:GOP Debate: Wasserman-Schultz, Taxes, and Herpes on the Menu

On Thursday August 5th, the second debate of this primary will take place in Hollywood,Florida.  This will be the last time voters will be able to see and hear the candidates discuss the issues and their campaigns before the August 24th primary election. This will be a pivotal primary race in Florida and voters will have to decide who best represents their views- a process that can be best described as “An American Thing.”