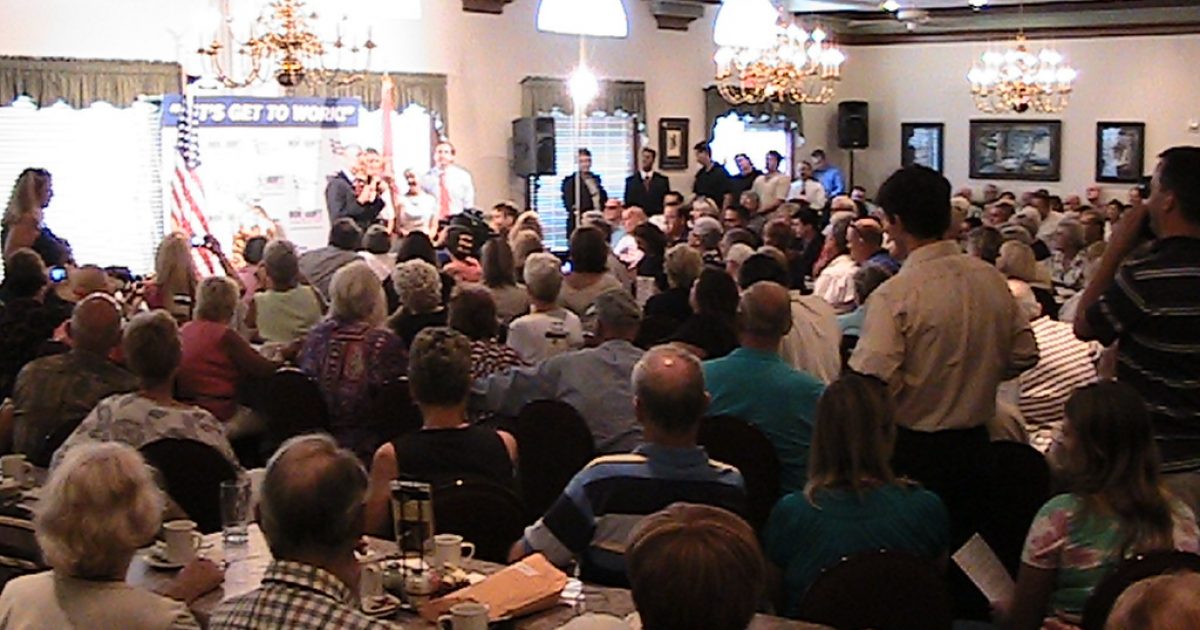 Day 2 of the Rick Scott bus tour began early in the morning as Scott visited the Ace Pump & Supply in Hollywood, Florida. From there, Scott’s tour headed to his campaign headquarters in Naples.  Scott was greeted at his North Naples campaign headquarters by crowd of 200 hoot-n-hollering supporters and well-wishers.  After a short address to the crowd, Scott answered a bunch of questions from those attended, ranging from illegal immigration, the BP oil spill, and job creation.

At the campaign headquarters event, yours truly, El Sharko, was also confronted by a very ‘pro-illegal immigration’ hispanic reporter who assumed that because I happen to be hispanic, I would oppose Rick Scott’s stance on illegal immigration. To his surprise, this tall, tanned, and tangy shark patiently explained his ‘pro-legal immigration’ position to this reporter.  As Senor reporter desperately tried to contain his shock and astonishment at my response, he concluded his questioning of me by asking me if I “felt ashamed” for being Hispanic for supporting an Arizona style law in Florida and being so pro-legal immigration.  El Sharko, ‘ashamed’ of his briny-blue heritage?  Perish the thought.

Scott, to his credit, has continued to assert that there is a need for an Arizona style immigration law here in Florida, as several reporters relentlessly questioned his position on the issue, but Scott has firmly held his ground on the matter.

Scott then visited several local businesses where he explained as to how he was going to be the ‘Chief Executive Job Maker’ for the state of Florida, and how he was going to be completely focused on creating a positive economic and business climate.  After that, the tour headed to Sarasota to visit a local restaurant where Scott was greeted by a crowd of over 400. Scott was introduced by Sarasota County REC Chairman Joe Gruters, who referred to Rick Scott as , “the next Governor of Florida.”  The crowd hung on his every word, and afterwards, I spoke to several people who explained to me that they were very impressed with Rick and would be voting for Mr. Scott on August 24th.  In a recent poll released today by PPP, Rick Scott is polling 14 points, 43-29 over his GOP opponent  Florida Attorney General Bill McCollum.

The bus tour across the state will continue on Friday with visits in and around the Tampa area, and then off to Northeast Florida.