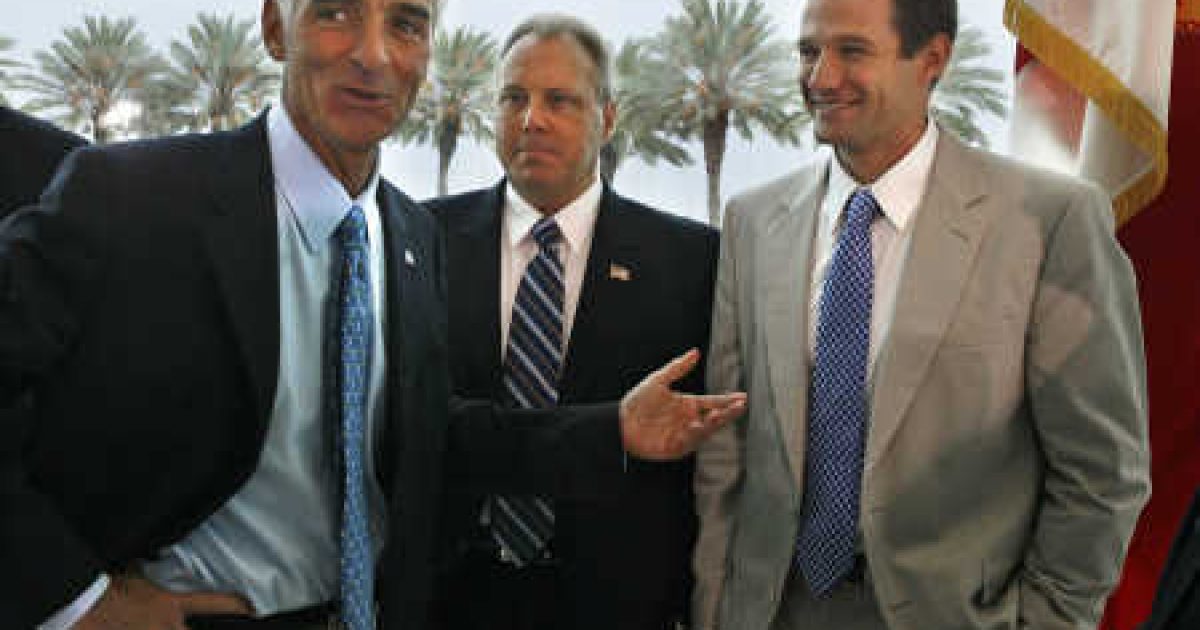 Jim Greer and the Damage Done- What Did Charlie Crist Know, and When Did He Know It?

As former boss-man of the RPOF, Jim Greer took a liking to posh five-star hotels, high-end restaurants, and private airfare, all on the RPOF dime.  But in light of Greer’s recent arrest, he may have to worry about some new accommodations that will be far less comfortable.  Greer will now have some extra motivation to tell investigators more about his friend and confidant, former Republican Governor Charlie Crist– but how much did Crist know about Greer and his alleged activities as RPOF Chairman?


According to the sworn affidavit filed last week, Delmar Johnson III has been assisting the investigation pursuant to a Deferred Prosecution Agreement, so it is near certain that he and Greer will be divulging information to investigators to minimize their potential criminal liability.  But Greer and Johnson’s statements on the record thus far appear to be contradictory, and they will no doubt be asked questions regarding what level of involvement Charlie Crist had with their activities, if any; and if Crist had knowledge of them or gave them his quiet approval.

While Greer was shaking down longstanding RPOF associates such as Meredith O’Rourke, he was promoting his cronies- enter Delmar Johnson III.  After serving as his “travel aide” during his campaign to become the RPOF Chairman, Johnson was appointed as the new Executive Director of the RPOF by Greer.  In 2009, as their scheme unfolded, Greer designated Johnson as an RPOF Fundraiser, and the two entered into an arrangement whereby they would take 10% of all major contributions that came into the RPOF.  Their creation of Victory Strategies LLC for this purpose was done by outside counsel that was under their direction, but this agreement was not brought to the attention of the RPOF’s General Counsel, Jason Gonzalez.

In FY 2009, the RPOF paid Victory Strategies LLC almost $200,000 in fees- Greer’s cut of that was approximately 125K, and Johnson’s was 65K.  Johnson stated in the affidavit that no one other than himself was aware of Mr. Greer’s financial interest in Victory Strategies. However, Greer has contradicted this claim through his attorneys by claiming that Crist was aware of Victory Strategies and personally signed off on his “confidential” fundraising role.  This is a very important discrepancy that will get increased attention in the coming weeks-  Johnson’s testimony vs. Greer’s allegation, and they will both be singing to investigators in order to save their hides from jail sentences. It is possible that Greer, in exchange for a lighter sentence, could divulge additional information that implicate others, including Charlie Crist.

We know that Greer was a self-aggrandizing control freak who was enriching himself while he simultaneously weakened the RPOF. Governor Crist has now stated on the record that he had no idea of what Greer was up to- so typical of his unaware persona that for far too long has answered the most straightforward questions with clichéd non-answers.  Some commentators are suggesting that Crist’s problem is that of excess loyalty and trust rather any potential involvement in Greer’s activities, but one would have to suspend disbelief in order to truly believe that Charlie Crist had absolutely no idea what was going on behind the scenes with Greer and the RPOF, given their close relationship.

Throughout his political career, Crist’s M.O. has been one of naked ambition with few real accomplishments or involvement in the contentious but necessary policy battles where real leadership was required.  Greer was Crist’s trusted friend and gatekeeper, the man who restricted access to him, and who no doubt did his bidding elsewhere.  Greer became RPOF Chairman only because Crist wanted him for the position, and it was Crist who single handedly kept Greer in his position in 2008 and beyond, even as calls intensified for Greer’s resignation. Crist’s complete lack of judgement in this matter is clear as day, but was Crist actually covering up for his friend?

We’ll find out soon enough just how much Crist knew about Jim Greer’s alleged illegal activities, and we’re quite skeptical of Crist’s claim that he was “surprised and disappointed” after Greer’s arrest.  This whole unfortunate episode has at least brought some clarity to one matter- Charlie Crist lacks the character and the judgement for federal office, regardless of whether he was aware of Greer’s potentially illegal conduct as RPOF Chairman or not.