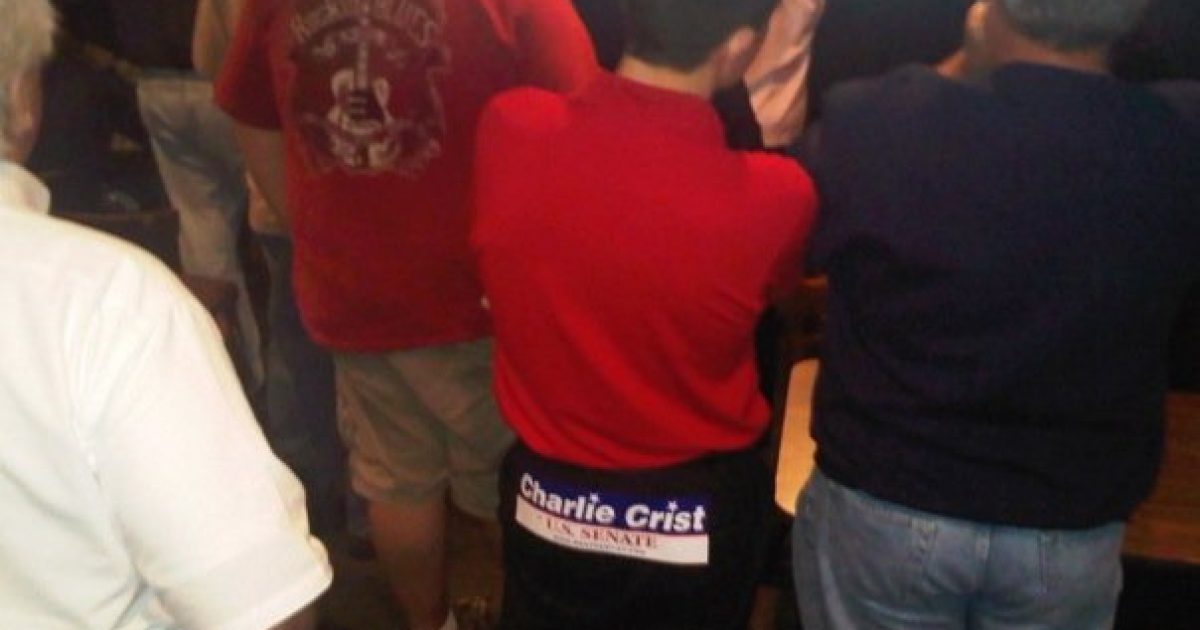 After Saturday’s Christan Family Coalition breakfast, Governor Charlie Crist made his way up to the ‘Crist for Senate’ grassroots meeting being held at the popular wings eatery, Wings Plus, an event sponsored by the Broward Gay Republican club, Sunshine Republicans.

Broward GOP Chairman Chip LaMarca told me that 125-150 people were in attendance to see Governor Crist and support his campaign.  Sunshine club officials later informed me that they garnered 364 sign-in signatures at the event.  Running yesterday’s Sunshine Republican

sponsored meeting was none other than Broward GOP Secretary Michael DeGruccio.  The Crist for Senate campaign is formally represented in Broward and Palm Beach counties by its Field Director and Broward GOP Membership Chairwoman, Anna Alexopoulus. Also in attendance was Broward GOP political consultant Richard DeNapoli.  DeNapoli was a busy little bee by first making an appearance at the FFC breakfast, and he drove quite a ways to be in attendance at the grassroots event.  This is outstanding dedication on DeNapoli’s part.

Moving on, the Sunshine Republicans is a club that branched off from the local Log Cabin Republicans and is headed by Dr. Ben Lewis, Ph.D.  The Vice President of the group is Nick Stone, and the Treasurer is Dr. Ronald Bullard, M.D. The group has told me a couple of times that they are not endorsing Governor Crist in the Senate race, yet I had to ask myself- what is the definition of an endorsement?

When visiting the clubs website www.sunshinerepublicans.org the button ‘our candidates’, the club openly promotes 3 Republican candidates, one being Governor Crist.  Couple that with yesterday’s sponsoring of the Crist for Senate grassroots meeting, and the club distributing Charlie Crist bumper stickers at their last meeting, I think the case is clearly made as to who the club is effectively backing in the senate race.

All three of the Directors of the Sunshine Republicans have personally and publically expressed their unwavering support for Governor Crist.  Ben Lewis has been one of Rubio’s most outspoken critics, and he has cheer leaded for Crist for quite some time.  In a recent Facebook post, Lewis stated,” Awesome meeting today with Florida Governor and Future U.S. Senator Charlie Crist.  An awesome man with true vision.”

Vice President Nick Stone has also come out for Crist in his own unique way.  Stone (no relation to Roger Stone) blogs on a little known and obscure blog named Drawnlines. If you were to visit this blog, you will see Stone’s ‘full frontal’ endorsement of Governor Charlie Crist and obvious bashing of Marco Rubio.

Dr. Bullard is the quietest of the three, at least that’s how he comes across to me. He mostly measures his support and gets off the subject.  Correct me if I am wrong Ron, just calling it like I see it.

One thing to note about the Sunshine Republicans, they are a Conservative Republican club that believes in fiscal restraint, defending the Constitution, fighting global extremism and repealing the military’s don’t ask don’t tell policy.