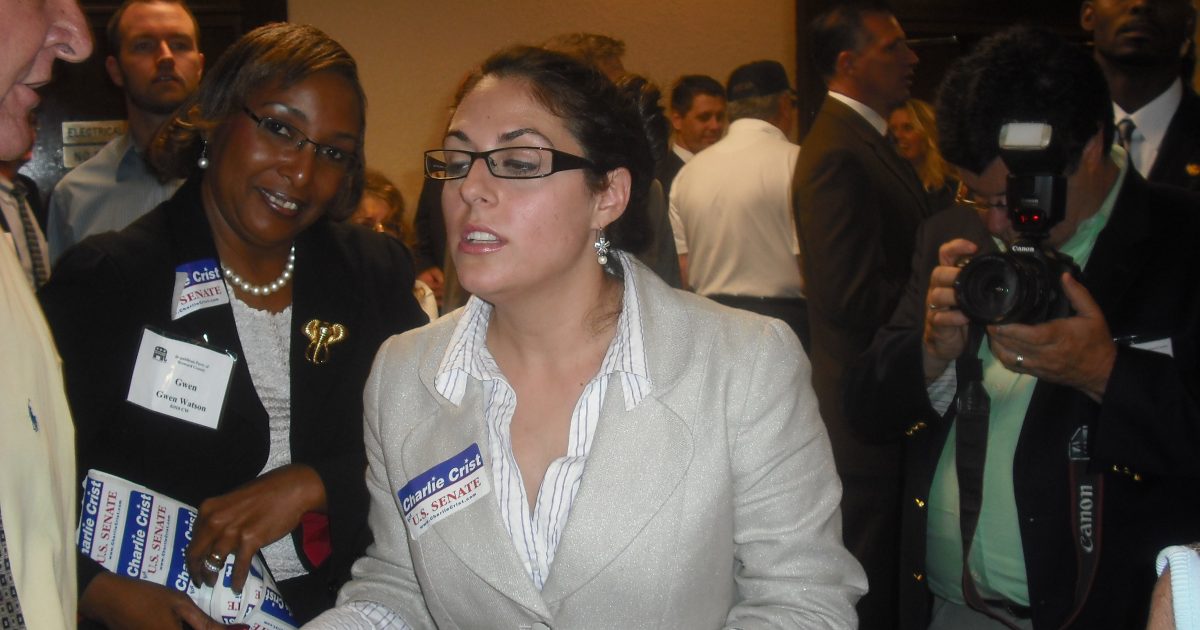 of a crowd of about 300 people (Yes, 300-including press, security and the BREC board) the Governor gave another one of his not-so-memorable speeches.  Just another speech, just another day, in the life of the sitting Governor of the state of Florida, right?

For the record, I, your ever humble and lovable correspondent, did not pose for a picture with Governor Crist, as misstated by Chairman of the BREC Chip LaMarca earlier today on the Joyce Kaufmann Show.   So to set the record straight, here’s my insta-take on what transpired last night @ the BREC.

Governor Crist began his 20 minute speech bashing the Obama Administration for the out of control spending that has been going on for since January.  Come again?  Could he be referring to the ‘porkulus’ plan that he endorsed and promoted with our beloved President, Barack  Hussein Obama?

But even before Charlie delivered his somewhat uninspiring speech,  the Governor mulled over the points in his prepared speech with several people who were offering him advice on what to add or subtract from his remarks in a hotel room a few floors above from where the BREC meeting took place.

As Governor Crist exchanged greetings with well-wishers upon his entrance into the room, I asked him if he would be interested in one-on-one debates with Marco Rubio. He replied, “I don’t know.”

The room was filled with old faces and faces that normally do not attend any of the monthly meetings. Many of the attendees were Crist appointees and long time political allies. There were however, a good number of Rubio supporters in attendance that were instructed to keep a very low profile.  One group of people that were noticeably absent were the BREC’s “activists”, as I call them.  I was contacted by many of these activists earlier in the day and told that they would rather stay home instead listening to more empty rhetoric from the Governor.

Upon his exit from the room, Governor Crist was asked if he would support the Obama stimulus plan again, he replied “yes, I would do it all over again”. Enough said.

All in all, it was a good night for the Broward GOP, who is trying to regain some face that was lost over this past summer.  The Broward GOP did perform very fairly in regards to not showing favoritism to Crist over Rubio as the majority of the Committee board is supporting Governor Crist.