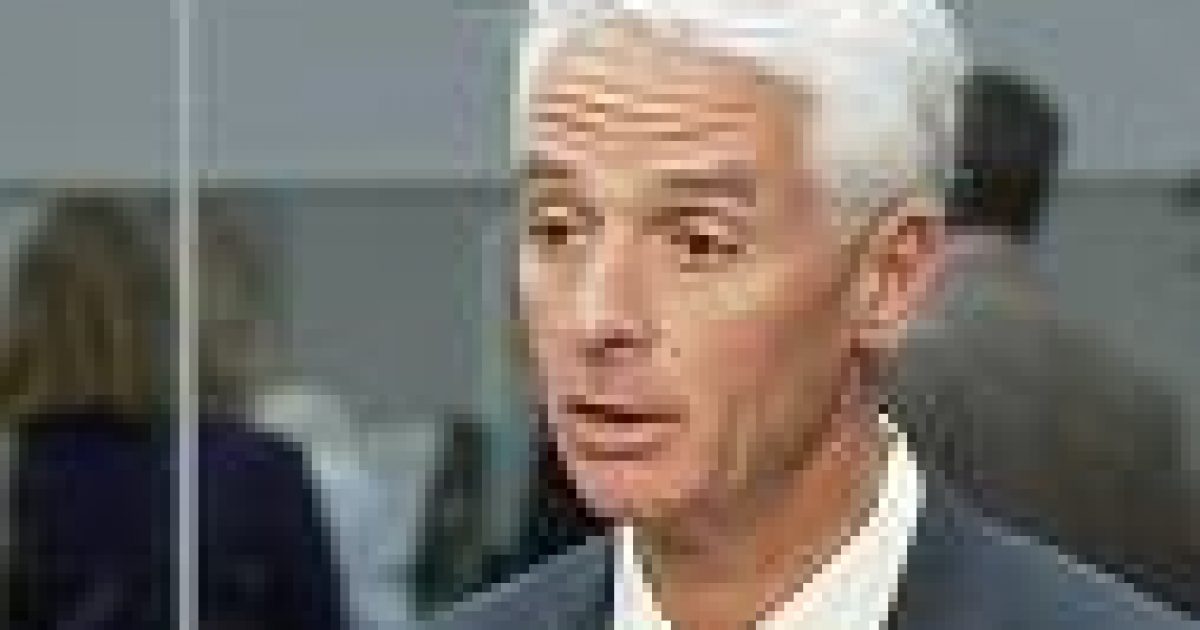 Today, I took a field trip to Tallahassee to meet up with several notable Florida politicians, but I had the good fortune of holding court with the most important Florida politico of them all, Governor Charlie Crist.  Many thanks to the Governor for making the time with your humble correspondent and two other media outlets to answer our questions.   The following is a transcript of the Q&A session I conducted  earlier this afternoon at the Capitol Building lobby where  the Governor was hosting a Florida Small Business Workshop.

Q: Regarding the stimulus package, on CNN, you said that you did not endorse the Stimulus plan, but the difference between endorsing, embracing and voting for it seems to be a shift of position.

Gov. Crist: Not really, not from my perspective. I’m the Governor.  So clearly, I didn’t have an opportunity to vote for it or against it, from my perspective it wasn’t perfect, but also from my perspective, that money helped save jobs for my fellow Floridians, so maybe it wasn’t a formal endorsement, but it was a reality that in fact this is coming to Florida, i’m gonna fight for Florida’s fair share because the people of our state need it, deserve it, should have it.  If it is going to go out anyway and like every other Republican governor in America, we utilized it for the benefit of my fellow Floridians, and in their cases, their respective states.

Q: Is it accurate to say that you are supportive of the federal stimulus package?

Gov. Crist: Not exactly in the way that it passed. And that may be the nuance that we are working with here.  I think it was  important to make sure that we try to keep our economy from falling off the cliff, and that’s where we were back then at the time. And maybe people have forgotten that.  And it started with the Bush Administration. And  people may have forgotten that too.  So I think it is important to realize where we are now.  I don’t think we need a stimulus two.  And where we were then when we had an economy where people were legitimately frightened to death.

Q: In retrospect, you wouldn’t retract your original support of the Obama stimulus package?

Gov. Crist: No, but  again, I didn’t endorse it.  Because I didn’t think it was a perfect plan, but also im a pragmatist and I realized that’s the one that’s coming at us. So you know, as Governor-CEO of the state, in essence my job is to fight for my fellow Floridians, to fight for the teachers of this state who teach our children to give them a better and brighter future.  Construction workers all over Florida have benefited  from the infrastructure investment, and have jobs to be able to put food on the table- it’s that fundamental, really.

Q: Speaking of construction, the high-speed commuter rail system- the SunRail- is a matter that will come before a special legislative session that you want to convene.   There is legitimate criticism this program will have enormous construction costs, and will not maintain itself by user fares alone.  This brings into play the possibility of higher taxes through tolls and other fees on Floridians.   Is it really a wise decision to increase deficit spending and taxes on projects like these at this juncture?

Gov. Crist: It depends, it depends upon how its structured. I can see the clear benefit both in transportation infrastructure for Florida, we’ve got a lot of  people in the state-almost 20 million.  The other thing is the jobs that if would produce would be enormously beneficial- our unemployment is still 11 percent, but I have tried to push that down as much as I can. In addition to that, depending on how the House and Senate feel about it,  and if there may be referendums that would be part and parcel of if any kind of (tax) increase would happen, so that’s kind of how I look at it.

Q: Will you be returning the money raised at the three Fort Lauderdale fundraisers held by Scott Rothstein on behalf of your Senate campaign to remove any hint of  impropriety?

Gov. Crist: We have already returned the money he and his family gave- seven days ago.