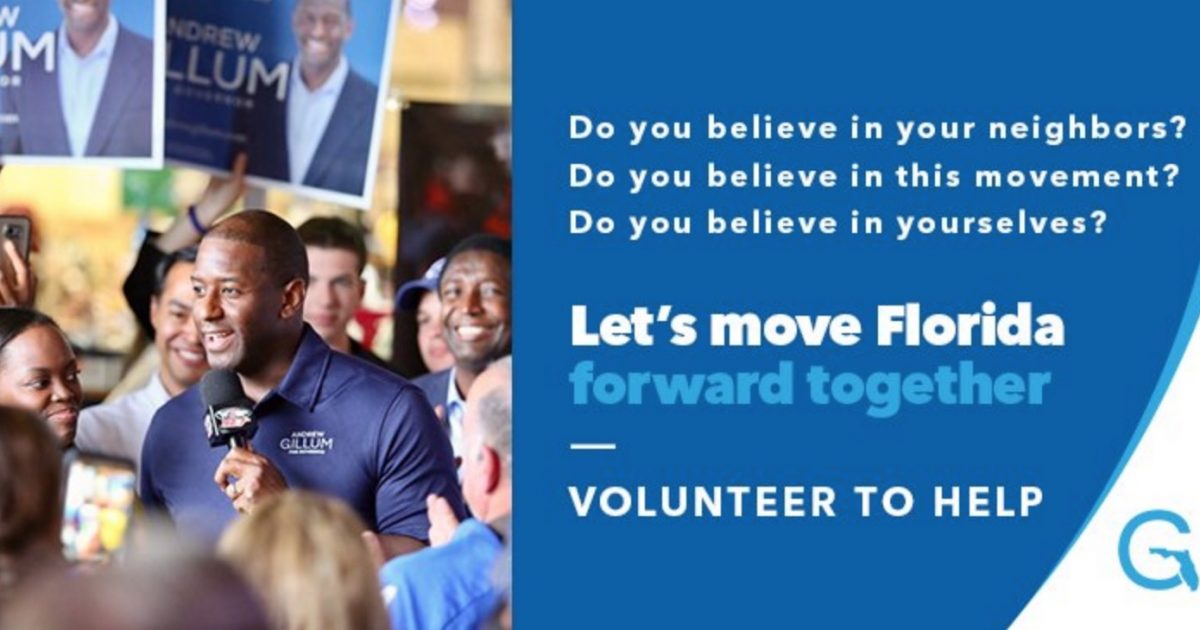 Gillum says he stopped campaigning, but he really didn’t

Democratic gubernatorial nominee Andrew Gillum announced early Thursday morning that he was back on the campaign trail.

Gillum took pause from campaigning to lend support to the Hurricane Michael recovery effort in the panhandle, but did he really take time off the campaign trail?

It appears that Gillum got back on the campaign trail days before he announced he did.

Gillum takes to the air to survey the damage. Pushes recovery updates.

We’re doing all we can to help those impacted by Hurricane Michael because here in Florida, we stick together! Join us in our effort to help those in need. Here’s where you can sign up to help >> https://t.co/Icer64K02P

More of the same. Gillum neck deep in recovery efforts

All things come must come to an end, so did Gillum’s pause in campaigning.

Here Gillum gets back to campaigning

This race isn’t about the names on the ballot, it’s about the issues people care about. Thank you to each one of you who is out there knocking on doors, making phone calls, and helping us get out the vote. If you’d like to join the team, volunteer >> https://t.co/PhGL1LPI2w pic.twitter.com/uE1xkHBLJO

Thank you for sharing your story, Gabby. I believe healthcare should be a right, and that no one should have to choose between paying the bills and paying for healthcare. https://t.co/p3e97QqY2d

R. Jai, you’ve been my partner and my rock — I can’t think of anyone else I’d want in this fight with me! It’s time to #BringItHome for the people of Florida. pic.twitter.com/zNLMzenpud

Campaign in full swing. Gillum takes to the sea.

When you elect me as the next governor of Florida, you’re going to have a governor who believes in science and who believes global warming and climate change are real. pic.twitter.com/9y9VLnZUWB

Gillum announces that today he is back to campaigning, even though it’s clear to the world that he has been campaign while saying he wasn’t campaigning.

There’s so much at stake for Floridians, and I’m ready to get back out there to talk to voters about the issues that matter to them. We have just 19 days left in this race — it’s time to #BringItHome! pic.twitter.com/6nBIy98aB6