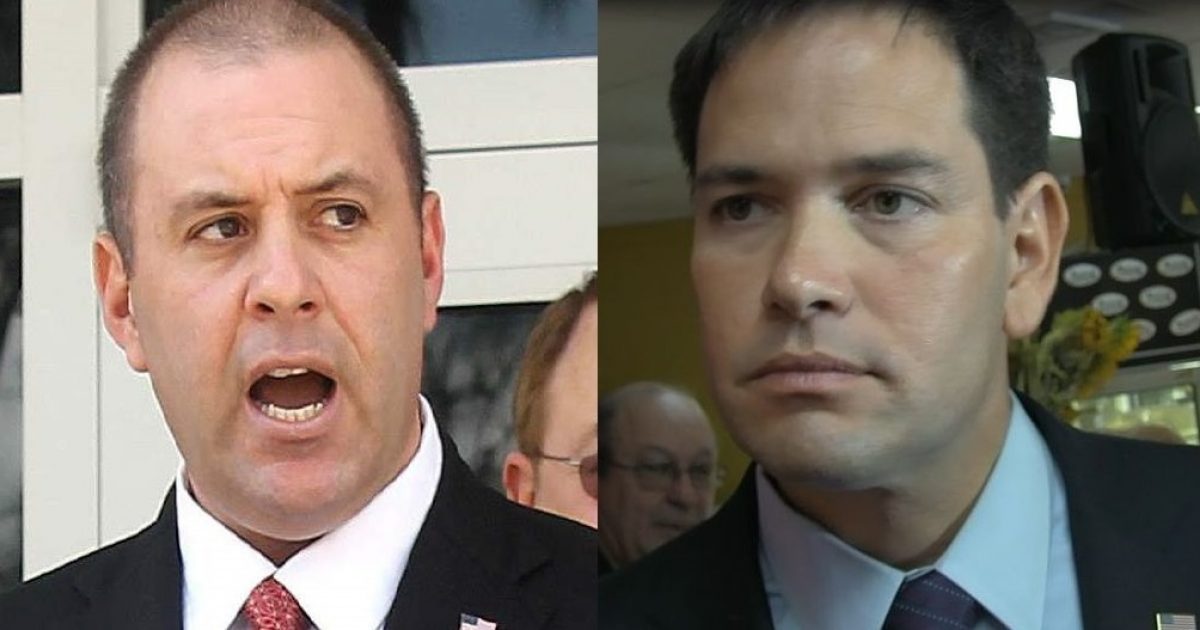 It appears that every single time the Republican Party of Florida is drawn into some sort of embarrassing controversy or infighting, all fingers point to the Broward chapter of the state party, the Broward Republican Executive Committee (BREC).

With Broward County being one of the most populous counties in the state, Republicans would think that all efforts to increase voter registration within their ranks would be a top priority for the group, right?

Republicans are currently third behind Democrats and Independents in the county voter registration tally due to the lack of voter contact that has occurred since 2010.

Unfortunately for Republicans, since Chairman Chip LaMarca stepped down from his spot at the BREC, nothing less than failed leadership, personal vendettas, and selfish political posturing has occurred among a very small group of narcissistic Antifa-Like individuals.

This GOP Antifa, some of whom are anti-Rubio (pictured) hold outs, appear only be focused on trying to veil their personal insecurities, political expediencies, and lack of any leadership skills, in hopes that  their peers will accept them.

The local GOP Antifa, some of whom have violent criminal histories, a history of defrauding residents, failed leadership, and others who are plain cowards with homosexual tendencies and don’t/can’t “measure up” to most Republican men, parade around the state causing drama and infighting wherever their frail and afeminine little bodies take them.

In speaking to RPOF Chairman Blaise Ingoglia (pictured), and no less than two dozen current Republican County Chairmen, vice Chairman, Secretaries, and committeemen and women around the state, the mere mention of Broward prompts them to break out in laughter and decry how far that local party has fallen over the past several  election cycles.

Current BREC Chairman Bob Sutton, who has had to deal with the corruption within his ranks, is at the center of the most recent controversy as the cowardly Republican Antifa element is trying to supplant him.

Sutton has pushed back by recently suspending the group’s secretary, Rupert “The Claw Hammer” Tarsey, after it was learned that Tarsey did not disclose the fact that he had beaten a girl 40 times with a clawed hammer.

Tarsey laughably defended his past action by claiming self defense.

Click here to read more about the embattled BREC’s history of controversy.

Much like members of Antifa due by masking their identities, Tarsey change his name from Ditsworth several years back in an apparent move to ‘mask’ his  violent past.

According to a recent article in the Sun Sentinel, many south Florida Republican leaders do not believe Tarsey should hold the office, and believe that he is a liability to the entire statewide party, and not an asset.

“I wouldn’t want him as an officer based on what I read about him. He’s pretty tarnished as far as I’m concerned,” he said. Budd said he doesn’t think Tarsey would have been elected secretary in May if they’d known about his background.

Former Congressman Allen West even felt compelled to address the embarrassing infighting that has once again been created by the group comprised of petulant, anti-Republicans within the BREC.

‘I will put my foot square up your butt,’said West about the bickering at the recent Reagan Day dinner.

The big play behind all of these shenanigans is for simple control of power in the GOP.

Johnny come lately Trump supporters, some of whom are part of this Broward GOP Antifa, are trying to position themselves to run for higher office. Meaning, some within this group of wannabe politicos are looking to better their chances of being elected Chairman, Vice Chairman, and state Committeewoman of the RPOF, while others aspire for the National Committeewoman position that will soon be vacated.

Unfortunately for Republicans in Florida, as long as this anti-Republican/Antifa element is allowed to exist within the structured GOP, they can expect this kind of turmoil to continue to occur. Party leaders have been well aware of who unsavory players are, but refuse to do anything about it.

Click here to read more about the embattled BREC’s history of controversy.