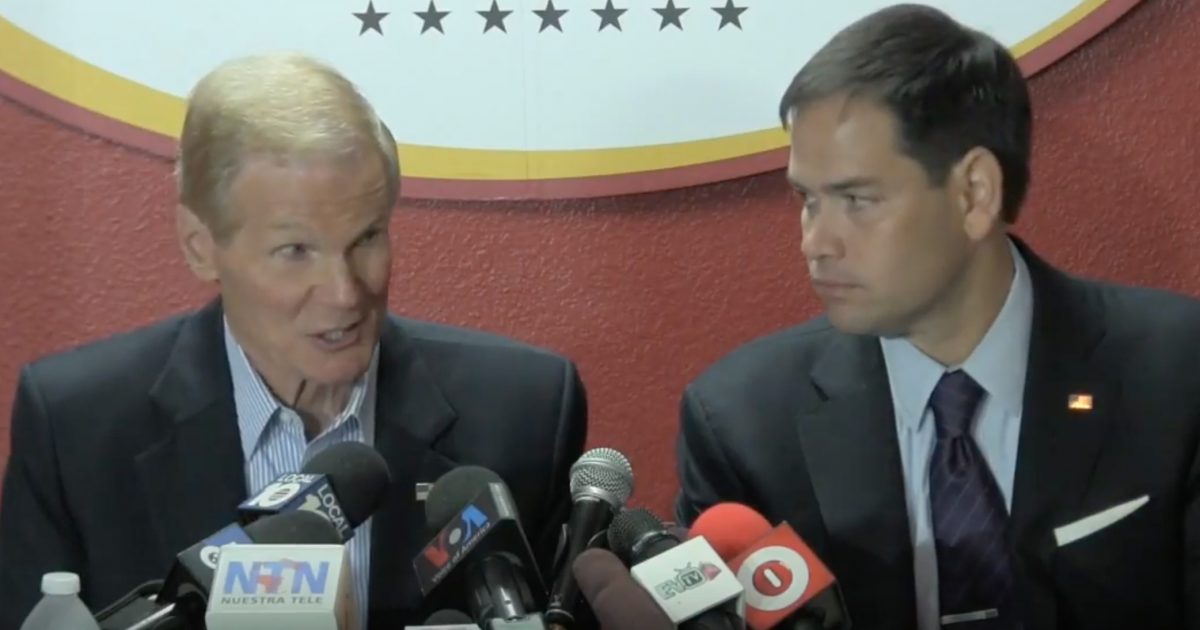 Since most of us have never seen a scared jackrabbit make a dash for the exit, it is fair to assume that Nelson campaign hard and fast against the very well-funded Rick Scott.

Nelson, who’s considered to be a “centrist” member of the U.S. Senate, has always ran towards the middle during election season, but his votes sing a different tune.

His voting record is extensive, so we’ll just name a few of the very left-leaning pieces of legislation that Sen. Nelson has supported over the years, including his full-throated support for Obamacare and partial-birth abortion.

First, we need to be fair to Senator Nelson. Nelson has in the past teamed up with other Republican senators like Marco Rubio (pictured) to pass meaningful bipartisan legislation, and has voted in favor of some legislation that many conservatives have supported.

On the issue of taxes, Nelson has supported both tax cuts and tax hikes.

When it comes to jobs here at home, well, Nelson is as much of a card-carrying union worker as an actual union worker, and has received glowing marks from the AFL-CIO.

President Donald Trump wants to build a “yuge” wall along the southern border with Mexico, so he shouldn’t find much opposition from Senator Nelson, considering that back in 2006 Nelson vote in favor of constructing border fence.

Supporting the construction of a border wall or fence is where Nelson parts ways with the president and the legal immigration reform lobby.

As far as the 2nd Amendment goes, Nelson is no friend of the NRA or the rest of the gun lobby.

Bill Nelson voted to allow America’s firearms manufacturers to be sued into bankruptcy – which would have eliminated tens of thousands of American jobs. (2)

Like I said, the list of his votes he has taken is extensive, but now that he faces arguably the most viable threat to his senate seat, could Senator Nelson need to veer to the extreme left for financial support to counter the expected tidal wave of campaign dollars Rick Scott will pour down on him?

The recent $10,000 donation Nelson’s reelection campaign received from “super-liberal” Senator Elizabeth Warren’s political action committee could be a sign that the three-term senator will need all the far-left money he can coral to stand his ground against Republicans in 2018.

The National Republican Senatorial Committee (NRSC) has already started their 2018 campaign against Nelson, and has recently outlined that Warren and Nelson have voted alongside one another 92% of the time.

If I were a betting man, I would bet my last scoop full of Tang that the “lockstep liberal” depiction former Rep. Connie Mack used against Nelson in the 2012 senate race has already being woven into the attack campaign against the senior senator from Florida.

Expect Rick Scott to announce his senate run in the coming months.