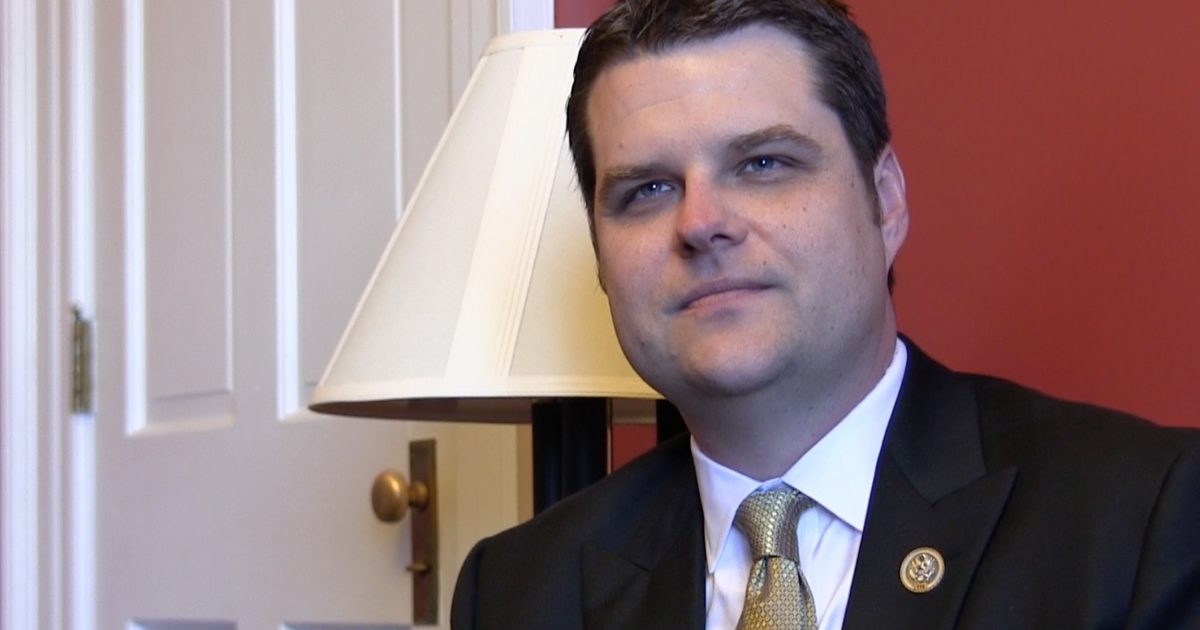 As SB10, a bill sponsored by state Senator Rob Bradley (R) and fully backed by Senate President Joe Negron (R), creeps through the committee hearing process in the Florida Legislature, more federally elected Republican officials are weighing in with their concerns over the proposed state land buy of private property.

Several weeks back U.S. Senator Marco Rubio (R) first sounded the alarm about how a state government buy out of private farmland would adversely affect those individuals living in the region.

Rubio told Senator Negron that there was “no federal money for it” because any money set aside to subsidize SB10 would take away funding for other issues and programs.”- Sen. Marco Rubio (R)

Now Freshman U.S. Representative Matt Gaetz (R) has just called Negron’s land buy initiative of being nothing more than eminent domain.  Gaetz made his remarks during  a sit down interview with the Shark Tank in Washington, D.C.

For Republicans in Florida, being labeled as someone who supports the use of eminent domain is just as damaging as being called a Charlie Crist Republican.

Eminent domain is the epitome of big government overreach and the trampling of individual rights.

There is no funding for it (SB10). Senate bill 10 relies on an assumption that is a fiction, that somehow the federal government will come in and fund a substantial element of the plan. That’s not going to happen, if anything, the debate and discussion that is occurring in Florida makes it harder for us to get the funding that is absolutely needed  to complete existing projects that have been in the pipeline for awhile.

The other interesting thing to note is that this land isn’t for sale. The owners of the land have said its not for sale, repeatedly, and they’re pretty credible in these claims.

And so the only way to affect senate’s plan is to utilize eminent domain, and that is something that should concern everybody who believes in the Constitution and individual rights when you got property owners that can be deprived of their land simply because someone is trying to make a political point in Tallahassee.”- Rep. Matt Gaetz (R)

Right now you have the Florida Senate hell bent to buy up a bunch of land that isn’t for sale, and is reliant of federal money that will never come.

Gaetz’s fellow Floridian, Rep. Daniel Webster (R), who believes that the federal government has more pressing issues to worry about than this kind of funding, says that now is not the “right” time for SB10.

I think we got our own problems right now and we have other priorities right this second, but there may be a day, and I’d have to look at the , benefits tied to it, but basically, not right now.-Rep. Daniel Webster (R)

Rep. Ron DeSantis (R), who says  SB10 hasn’t been on his radar, echoed what Webster said in that there was “so much other stuff” members of Congress needed to focus on.

Other members of Congress and their staff, like Utah Congressman Rob Bishop (R), see things like  DeSantis and either don’t see SB10 as a priority, or don’t much about the bill to even comment about it.

“As a senior member of the Appropriations Committee and founder of the Everglades Caucus, Everglades restoration is a top priority. My focus will be to continue funding the projects in the Army Corps’ integrated delivery schedule.”-Rep. Mario Diaz-Balart (R)

On the other side of land  buyout initiative is the Everglades Foundation. The foundation’s CEO Erik Eikenberg, a former Charlie Crist Republican, praised the recent amendment Senator Negron added as a quick fix to SB10.

“President Negron’s amendment moves us closer than ever before to our goals of greater water storage south of Lake Okeechobee, massive reductions of algae-causing discharges and improvements in the quality of water entering the Everglades and Florida Bay. It fulfills our objectives of moving more water south, and by prioritizing the use of land already owned by the state, it reduces the need for bonding.

“We are pleased that the legislation will compel the South Florida Water Management District to prioritize storage south of Lake Okeechobee — something that we have urged for years.

“The amendment will also provide an additional $100 million to expedite the reservoir and existing projects already underway.”

The Everglades Foundation does have one Republican congressman it can call a friend, Rep. Brian Mast.

Mast recent congressional run was “anchored” on cleaning up and preserving Florida waterways from pollution like the nutrient-filled run-off that has caused massive algae blooms throughout the state.

Mast, who is no friend to the sugar industry, has given Negron’s land buy proposal a full-throated endorsement, leaving many of his conservative Republican colleagues in the House to continue question his conservative bona fides. One member, who asked that his name be kept out of this story, said that Mast appears to have “kissed the ring” when he asked his colleagues to support the recent “Republican version of Obamacare” bill, the American Health Care Act.

“One of the most important things that we can do to save our coastal waters and our coastal estuaries is making sure we find ways to move the water south.

That’s why I support SB 10 and it’s why the first action I took when I got to Congress was securing a spot as Vice Chairman of the Water Resources and Environment subcommittee of the Transportation and Infrastructure Committee.  In this role, I am pushing to secure the federal support and funding needed to restore our environment and protect the economy.”-Rep. Brian Mast (R)