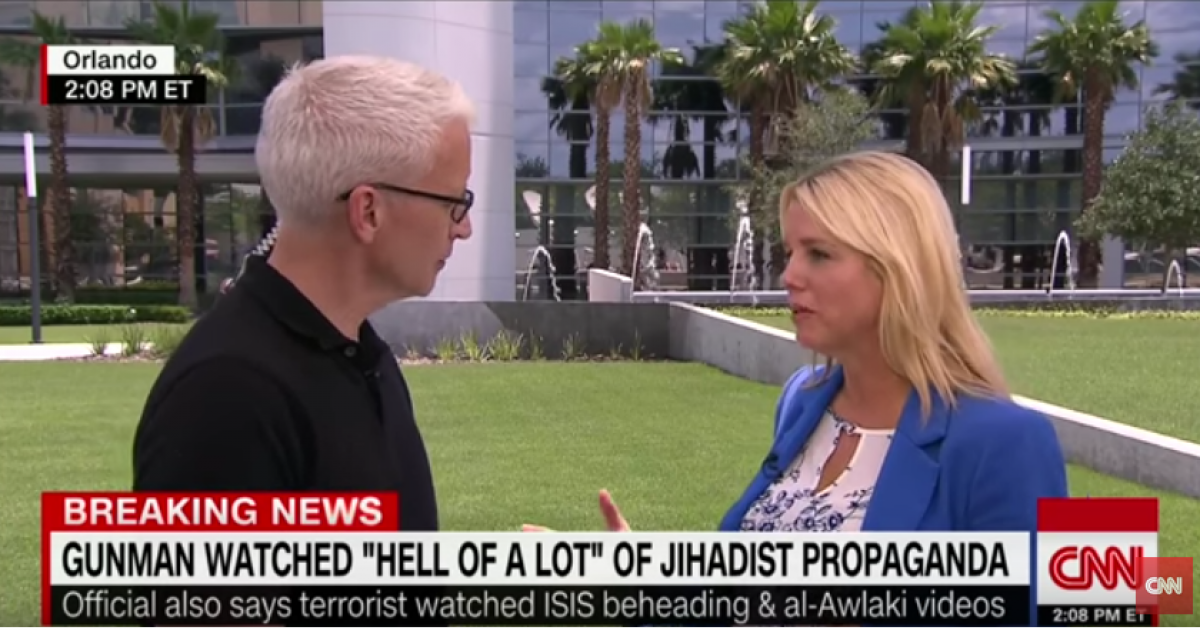 Bondi Gets Ambushed By CNN Over Gay Rights (VIDEO)

Florida Attorney General Pam Bondi was ambushed on Tuesday during an interview with CNN’s Anderson Cooper over her role in the state’s fight against same-sex marriage with her response to the massacre at a gay nightclub in Orlando.

Bondi has responded Cooper conducted an inappropriate interview after telling her it would be about something else.

First the interview started off with a question about scam artists using the tragedy to take advantage of people, then Cooper started asking Bondi how she can offer support to the victims of the shooting.

Bondi is fighting back and while on a New York radio show she said:

He completely flipped, got into a constitutional issue, of course, that was in the Florida Constitution. There’s a time and a place for everything. Yesterday wasn’t the time or place, in front of a hospital, when we could have been helping victims. And Anderson Cooper is the champion for the LGBT community and he could have been helping people, so I was disappointed. I was extremely disappointed and it wasn’t the time nor place.

In the wake of this horrible tragedy, 15 of my victim advocates and I have been working with the families to provide grief counseling, as well as victim compensation for burial expenses. We are dedicated to love, kindness and helping victims.

We learned that potentially millions of dollars were quickly flowing into online organizations throughout the country all claiming to help victims of this tragedy. We needed to get the message out fast and had an agreement with CNN that we were warning generous Americans who are donating to these victims about charity scams. We are disappointed Anderson Cooper edited out the entire portion of the interview that could have helped many victims’ families and generous Americans during this time of need.

If you wish to donate, please be aware there are more than 100 crowdfunding websites (such as GoFundMe accounts) popping up throughout the country, claiming to help these victims. Please remain generous, but follow these guidelines:

Consider donating to an established disaster-relief charity or an established aid organization based in the Orlando area. Numerous incident-specific charities may be created, some legitimately wishing to bring aid to those affected and others wishing to profit off of the goodwill offered in a time of need;

Determine whether a charity soliciting money is legitimate by checking to see if it is registered with the Florida Department of Agriculture and Consumer Services at 800HelpFla.com or by calling (800) HELP-FLA;

Contact the Better Business Bureau’s Wise Giving Alliance at Give.org to determine whether a charity has any complaints against them;

Understand how much of the donation will actually go toward the work of the charity as opposed to administrative and fundraising expenses. To learn more about a registered charity’s spending visit FreshFromFlorida.com; and

Watch for similar sounding charities. It’s not unusual for scammers to choose names that sound like the names of legitimate, widely known charities.

You can watch the interview here: