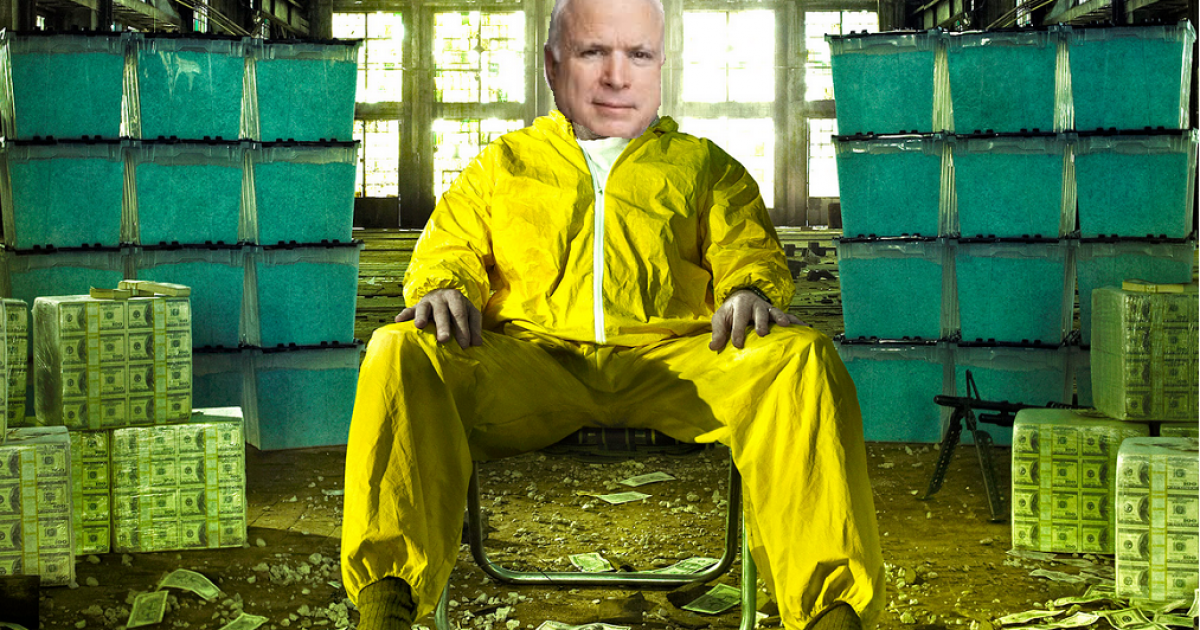 Apparently John McCain (AZ-R) does not pay enough to his fundraisers and they need to supplement their income selling drugs.

McCain’s re-election fundraiser Emily Pitha was arrested on Tuesday by officers from the Maricopa County Sheriff’s Department. After searching her house they found an active meth lab and other illicit drugs.

We commend the hard work and dedication of our law enforcement officers in their fight to keep our community safe from illegal drugs and criminal activity. The campaign immediately terminated any relationship with Ms. Pitha upon learning about her alleged involvement in the operation.

The Maricopa County Sheriff’s Office spokesman said authorities were first alerted to possible drug activity at her house when she received mail from the Netherlands containing over 250 grams of MDMA – raw ecstasy.

Knowing that, detectives obtained a search warrant and while in the home found an active meth lab along with LSD, cocaine, heroin, methamphetamine, about $7,000 in loose currency, and counterfeit money. A separate building with a hidden room was to be used as a marijuana-grow facility.

Pitha and her boyfriend Christopher Hustrulid were arrested and expected to face numerous drug violations in addition to possible child-endangerment charges.

Two children — ages 5 and 10 — were living in the home. Detective Doug Matteson said they “had easy access to all of (the) drugs and materials, even the bomb-making materials that were located in the back of the meth lab.”

Deputies evacuated occupants of nearby homes while the bomb squad disposed of the volatile materials used in the meth-making process.

No injuries were reported except possible damage to John McCain’s campaign.