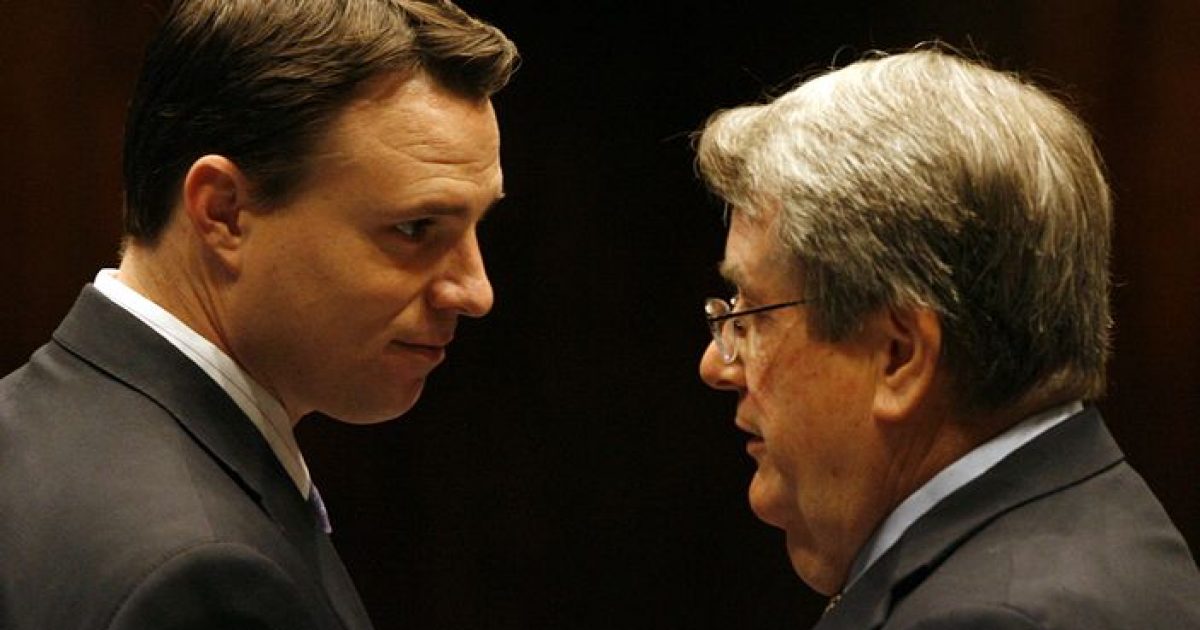 The political excrement has hit the fan in Tallahassee, as once-sealed and secret emails regarding the shenanigans Republican consultants participated in when drawing 2012 redistricting maps, have now been unsealed.

Data Targeting and its head honcho, Pat Bainter, are at the center of the controversy, as emails show Bainter and associates devising ways to deceive the public when they recruited “third parties to submit maps” during the redistricting process.

The Shark Tank has covered this story since the very beginning, receiving considerable push back from those involved in the scandal who said that our findings were baseless and untrue.

The dirty little emails secret is that we were right all along, when we outed Republican legislators and operatives, including the Speaker Will Weatherford, who was in charge of redistricting, for pushing out former Congressman Allen West from of his safe congressional district.

Back in 2012, Weatherford was skewered by conservative talk show hosts Rush Limbaugh and Mark Levin for is then-supposed involvement in the scandal.

Weatherford denied wrong-doing and claimed that the process was fair and met the requirements of Amendments 5 and 6.

Weatherford later defended the maps drawn ” ticking off a list of Republicans who lost primary or general elections after the lines were redrawn.”

Remember, in the fall of 2011, one of these “brilliant” legislators told the Shark Tank that Allen West was screwed, before the redistricting maps were ever released.-SHARK TANK

Here is what the Miami Herald had to say about the emails:

The plot was spelled out in a newly released batch of once-secret emails that show how the consultants surreptitiously drew congressional and state legislative maps. They then recruited seemingly independent citizens to submit them in an effort to strengthen the hand of Florida Republicans when the GOP-led Legislature redrew lawmaker districts in 2011.

The year before, Florida voters overwhelmingly amended the state’s constitution to prohibit legislators from drawing legislative and congressional districts that favor or disfavor incumbents or political parties. Citing the new amendments, a coalition of voting-rights and liberal groups called the Fair Districts Coalition sued the Legislature over its maps.

The emails, under court seal until this weekend, played a key role in a recent court victory to force the Legislature to redraw some of Florida’s congressional districts. The correspondence will take center stage in a related case challenging the state Senate maps.

The emails also provide a fly-on-the-wall glimpse of how political players used secrecy and deception as they recruited third parties to submit maps, some of which were drawn by Gainesville-based Data Targeting firm, led by political player Pat Bainter.

“Want to echo Pat’s reminder about being incredibly careful and deliberative here, especially when working with people who are organizing other folks,” Data Targeting’s Matt Mitchell wrote in a Nov. 29, 2011 email. “Must be very smart in how we prep every single person we talk to about all of these. If you can think of a more secure and failsafe way to engage our people, please do it. Cannot be too redundant on that front.”

Tampa Bay consultant Anthony Pedicini, who managed the losing legislative campaign for Richard DeNapoli, is also caught up in this mess.

Here is what Scripps, who first obtained the emails, wrote about Pedicini’s involvement:

Bainter said attorneys told him that they can deviate in population by up to 5 percent as long as it’s in the name of preventing “retrogression,” or the weakening of minority voting strength in certain districts.

“So, in affect, we are green lighted to, for example, make some of the panhandle districts light, but as much as minus 5% in order to be able to bring more population to some of the minority districts,” Bainter wrote in a July 2011 email.

Bainter was clear this would only apply to “STATE LEGISLATIVE DISTRICTS” not covered by federal voting laws, according to the email.
Pedicini responded six-minutes later with a one-word email: “Yeah!”

Will heads roll, and if they do, how far will they roll?

The Republican Party of Florida has been defending these consultants since the lawsuit was first filed.

Were they complicit with these redistricting shenanigans?