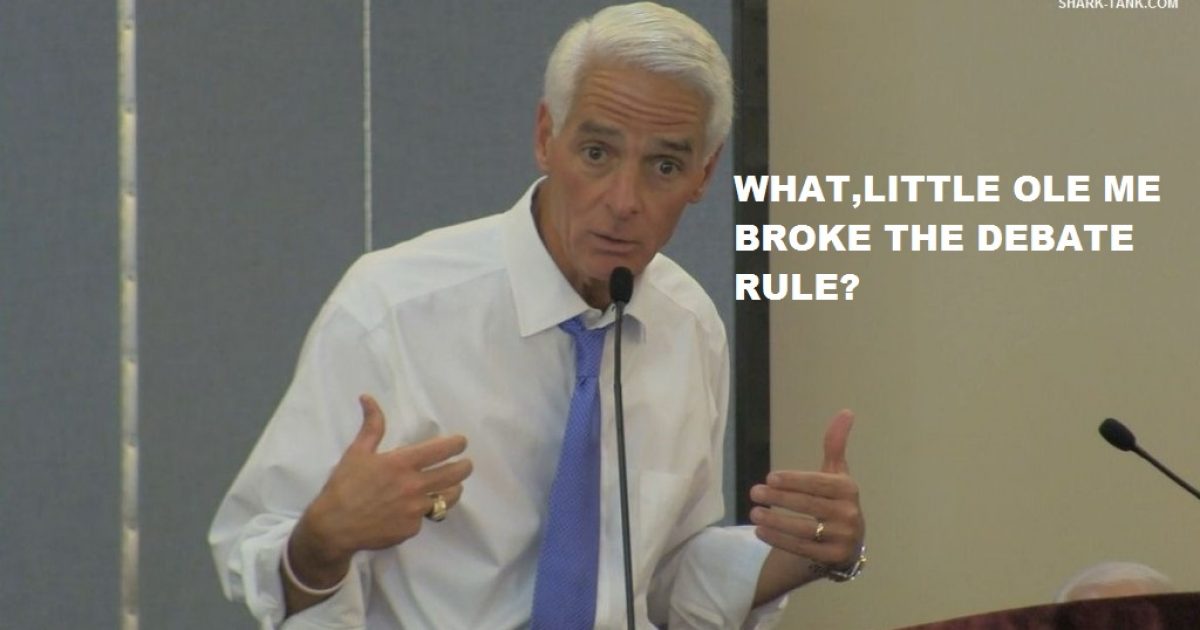 Now there is finally some clarity to what really happened during the second gubernatorial debate between Florida Governor Rick Scott and Democrat Charlie Crist.

Leadership Florida, the organizers of the debate, release a statement clearly pointing out that Charlie Crist did in fact violate the agreed upon debate rules, and smacked down his campaigns claim that Rick Scott was not going to debate.

Here is what we posted shortly after the debate, and after both camps gave their take of what happened with Charlie Crist’s electric fan:

Rick Scott’s campaign says that Crist clearly violated debate rules by using ‘other’ electronic devises, which would include the use of his fan on stage during the debate.

Charlie Crist’s campaign contends that use of a fan was agreed upon.

State Senator and Crist campaign advisor Dan Gelber told reporters that this in fact was the case and furnished a letter he signed on behalf of the campaign, which outlined debate rules that both men apparently agreed upon.

The letter Gelber furnished only stated that neither of the two campaigns could use any audio, film or video footage of the debate publically on any media platform, including internet, TV, radio, etc.

No where on the letter does it state that a fan could or could not be used.

Wait, Gelber’s letter did have a little handwritten note on it just below his signature, which read:

“With the understanding that the debate hosts will address any temperature issues with a a fan if necessary.”

According to Leadership Florida, both campaigns signed the agreed upon debate terms, but Crist’s campaign, as we mentioned, did in fact add a “hand-written note “**with understanding that the debate hosts will address any temperature issues with a fan if necessary.”

Here is what Leadership Florida stated:

The Scott campaign signed and returned the letter on Thursday, October 9. The Crist campaign signed and returned the letter on Monday, October 13, but with the added hand-written note “*with understanding that the debate hosts will address any temperature issues with a fan if necessary.” Dean Ridings, FPA President, received and reviewed the note and told the Crist campaign that the partners want all candidates to be comfortable, but that he expected that Bailey Hall, the newly renovated-facility at Broward College where the debate was to be held, would be maintained at a comfortable temperature, and if there was a temperature problem, the partners would deal with it appropriately.

Between 6 and 6:20 p.m., someone from the Crist campaign placed a fan under Charlie Crist’s podium, and they were again told that no fans would be permitted.

In the minutes before airtime, the communication among the campaigns, the producing television station and the debate partners was chaotic and there undoubtedly was some confusion, but Governor Scott never told Ridings or Wendy Walker, President, Leadership Florida, that he would not join the Debate. Rather, the Scott campaign was waiting on resolution of the rules issue before Scott took the stage. The debate partners appreciate Governor Scott’s willingness to participate in the Debate.

Leadership Florida and the Florida Press Association did not anticipate or plan for the possibility that a candidate would not honor the Debate rules.

Well, there you have it. As Senator Marco Rubio stated during the post debate spin, Crist was the one who was not going to debate if his fan was not place on the stage.

And like the debate organizers also stated, Rick Scott never told them he would not participate in the debate, but showed the “willingness to participate”.

“…Our campaign was not notified Charlie had even taken the stage because the last we heard, Crist was in an “emergency meeting” with debate organizers pleading for his precious fan.

But Charlie Crist can bring his fan, microwave, and toaster to debates – – none of that will cover up how sad his record as Governor was compared to the success of Governor Rick Scott.”- Melissa Sellers, Scott Campaign Manager