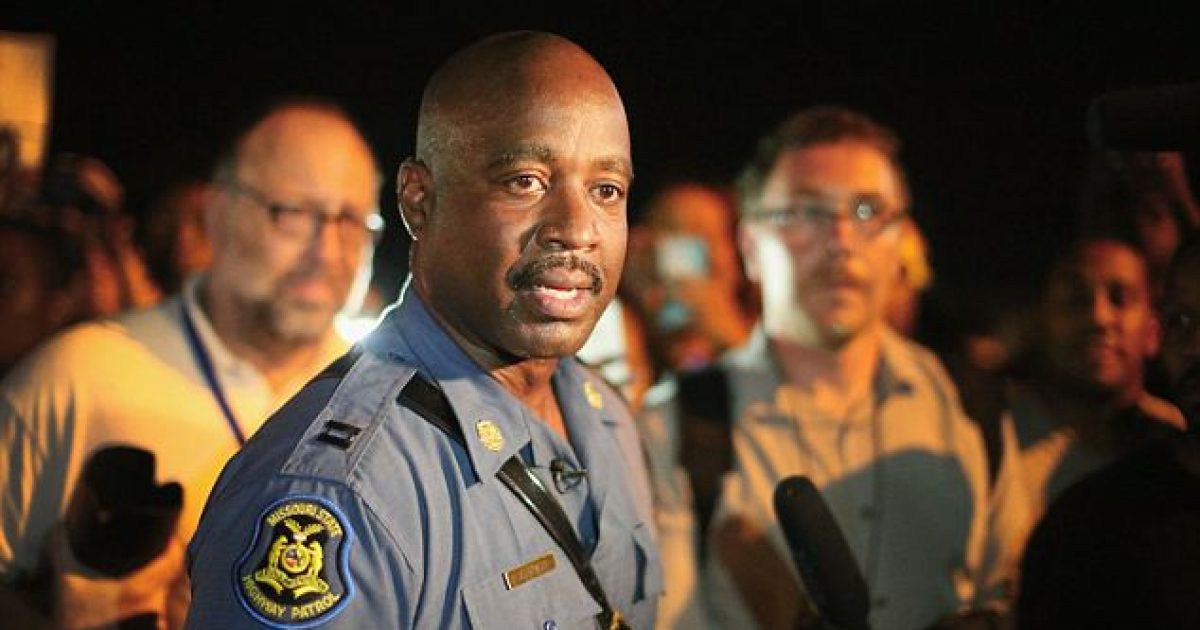 Police Captain In Charge Of Riot Contol In Ferguson Is Black, Sharpton Must Be Beside Himself

Civil rights activists (race-baiters) like Al Sharpton and Jesse Jackson were quick in their efforts to make the unfortunate shooting in Ferguson, Missouri, into a racially divisive political circus like they did with Trayvon Martin.

Their actions and words only helped to insight more violence from angry “agitators,” who used the peaceful protests to mask their criminal acts.
After the initial policing of the rioting was condemned for its use of “militarized” police equipment, such as tear gas, body armor, and armor personnel vehicles, the Missouri State Police was called in to take over to try to calm tensions.

This move worked for about one day, but failed as the rioting and assaulting of police officers quickly resumed.

I would guess that right now, Sharpton and Jackson are fuming over the fact that the man in charge of the Missouri State Police, who ordered his police officers to dawn protective gear when the rioting resume, is a black man.

Missouri Highway Patrol Capt. Ron Johnson is putting the blame firmly on the “violent agitators” for ‘blowing up’ the peaceful protester, simply to run “cover” for the “criminal acts” they are committing.

Missouri Highway Patrol Capt. Ron Johnson told reporters in Ferguson early Tuesday that 31 people had been arrested during a night of unrest that followed a day of largely peaceful protest. As Johnson spoke, two handguns and a Molotov cocktail that he said had been confiscated during the night by authorities lay on a table in front of him.

The majority-black town of approximately 21,000 has been roiled by unrest since the death of 18-year-old Michael Brown, who was fatally shot by a white police officer following a confrontation of some kind on the afternoon of August 9. Local authorities have fired tear gas and smoke canisters on an almost daily basis at protesters upset with the response to the shootings by Ferguson Police.

A visibly angry Johnson said that officers had come under heavy gunfire from protesters and at least two people had been shot. Johnson said he did not know the condition of the shooting victims. Four officers had been injured when they were struck by rocks or bottles, though Johnson claimed that police had not fired a single shot. –FOX News

I am going to start taking bets as to when Sharpton, Jackson, and other prominent black leaders will start calling Capt. Johnson an “Uncle Tom” or saying that he is not “black enough,” for doing his job as a police officer.

Remember, in the eyes of racists like Sharpton and Jackson, “all” black people need to side with black people, regardless of the situation. That is my take.