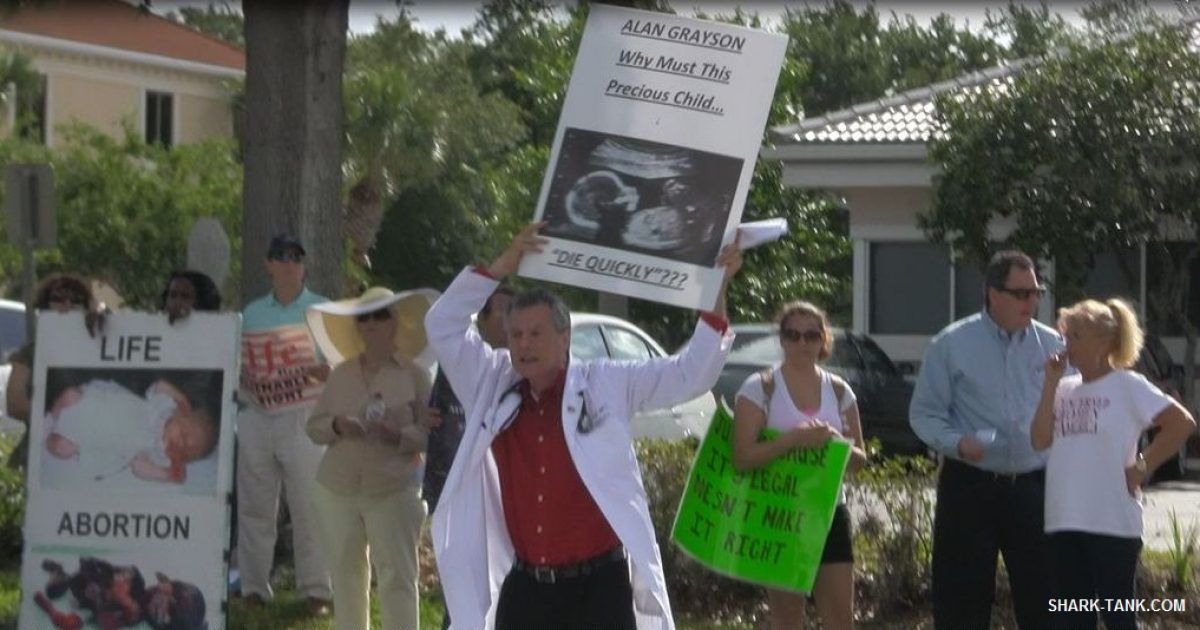 A group of more than 100 concerned Pro-life Americans protested outside the new facility, holding signs, praying, as well as chanting criticisms and expressing their disgust over the practice of abortion, as well as Congressman Grayson’s unapologetic support for the “medical procedure.”

Tosh is Planned Parenthood’s President and CEO, who recently stated that the Kissimmee mega center will target “a largely Hispanic population.” Tosh emphasized several times in the article that the center would target the “ethnic” community and “the young and diverse population” of Osceola County.”

In essence, Planned Parenthood is admitting to using racial profiling tactics to specifically target minorities for abortions, and other services.

The event was closed to the public, and closed to any media that did not RSVP by 5:00pm the previous day..

This is what Planned Parenthood’s Director of External Affairs, Anna Skamania, told the Shark Tank upon denying us entry into the facility.

Shortly before Congressman Grayson arrived, one of Grayson’s staffer was overheard saying that Jorge Bonilla, who is Grayson’s Republican congressional opponent, was across the street with the crowd “creeping.”

Bonilla later stated that he too was denied entrance to the event, and added some choice words for Grayson’s show of support for Planned Parenthood, who according to Bonilla, has a “racist, destructive mission that is rooted in their history.”

It’s interesting and ironic that someone who calls himself a champion of “brown people,” would come here and sponsor a place that targets them for destruction.”-Jorge Bonilla

We tried to get his thoughts about the protesters, but Grayson, who usually embraces the press to make grandiose remarks and statements, blew off the question by simply stating that he had “no thoughts,” as he was whisked through the back entrance of the building.

In the video below, the exchange with Grayson is caught on film, as well as Bonilla’s remarks and protestor Lourdes Cancel’s blistering condemnation of Planned Parenthood’s blatant targeting of Hispanics.

They target every race, the majority here is Latin…Anybody that does not respect life, should not be sitting in Congress.”-Lourdes Cancel

This is a must watch video!

*NEW* BREAKING: Look What Biden Is BUILDING In Poland After The DISASTER In Afghanistan… Are You F**king Kidding Me?
America's Freedom Fighters