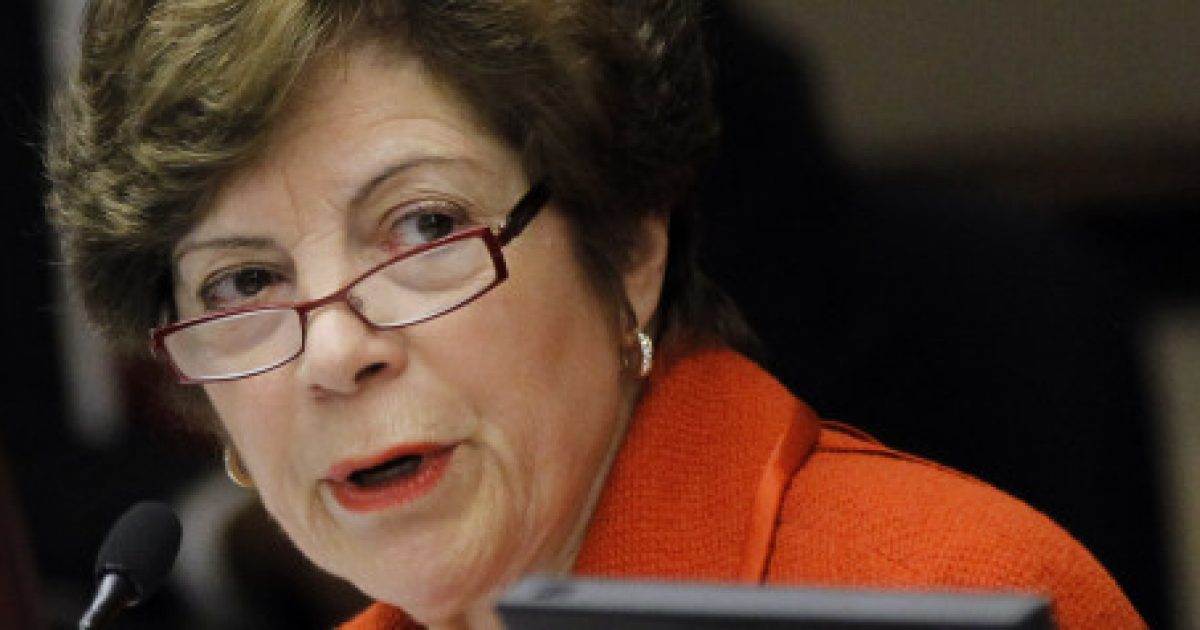 State Senator Nan Rich is supposedly ‘encouraging’ Florida House Speaker Will Weatherford to “man up” and “do the right thing”– abandon his support of the Florida Health Choices Plus program and support her preferred alternative–the federal expansion of the Medicaid program in the state of Florida.

As many of our readers are well aware, we here at the Shark Tank spend countless hours exhorting politicians to “man up” on any number of issues and concerns. Without naming any specific names, we all know that there are far too many Republicans who absolutely need to “man up” and put aside their penchant for kindergarten silliness and bipartisan sellouts in their dealings.

But in the interests of fairness and equality, we also believe that certain female politicians must “woman up” as well and start telling the truth– perhaps the more frequently used lingo for the fairer sex is that they should “put on their big girl panties.”

So with those ground rules discharged we would like to remind you, Senator Rich, of the following premises in the debate over Medicaid expansion in this state that you are conveniently ignoring:

– We would be utterly foolish to rely on empty federal funding promises that originate from an already bankrupt federal government that can renege on those funding “promises” at any time in the future.

– Speaking of funding “promises”, there is no such thing as “free money.” That $51 Billion dollars you flippantly refer to does not reside in some federal bank account– that money comes from future generations who have no absolutely say in the matter while you busy yourself by bribing today’s voters with our children’s future earnings.

– Market-based alternatives such as Florida Health Choices Plus program are sorely needed in our healthcare system. As the Department of Health and Human Services begins federalizing the entire healthcare system under Obamacare, what has that resulted in to date? Spiraling health care costs and healthcare practitioners fleeing the system in droves, that’s what.

– Medical insurance does not equate to timely medical care, and we’ve learned yet again that Medicaid has little or no effect on health outcomes vs. being uninsured (see the Oregon experiment recently published in the New England Journal of Medicine.) Welcome to the future under Obamacare- everyone’s insured, but no one’s receiving health care when they need it. – Facts on Health Care, courtesy of Lone Shark, 5/19/13


Rep. Weatherford won’t say it, but I will– it’s you who need to put on those big girl panties, Senator Rich. The facts in the healthcare debate matter, and we are tired of the shameless demagoguery on healthcare that originates from far too many politicians who ignore so many of the underlying assumptions that ultimately contribute to spiraling healthcare costs and unsustainable public debt.

Two weeks have passed since ceremonial handkerchiefs signaled the end of the legislative session. But not one signal yet that the Governor will call a special session to pressure House Speaker Weatherford into passing Medicaid expansion.
Meanwhile, more than 1 million Floridians are left without healthcare coverage.

Clearly there’s no urgency on the part of the Speaker or the Governor to take action. Maybe, just maybe, that’s because both of them are covered by great health insurance plans – plans that are heavily subsidized by the taxpayers.

In fact, Speaker Weatherford and members of the House only have to pay $8.34 a month for their personal coverage and a piddling $30 a month to cover their entire family.

And now, as a result of the stubbornness and shortsightedness of Speaker Weatherford and the lack of leadership of Governor Scott, Florida may lose $51 billion of Federal funds (our tax dollars) that are available for the expansion of Medicaid.

Mr. Weatherford, it’s time for you to “man up” and do the right thing! Put your Tea-Party politics aside long enough to serve the needs of over 1 million uninsured Floridians. Pass Medicaid expansion – as it is meant to be – according to the Affordable Care Act – the law of the land.

As Governor, I would immediately call the legislature back into Special Session and keep them there until they passed a bill that adequately addressed Medicaid expansion.