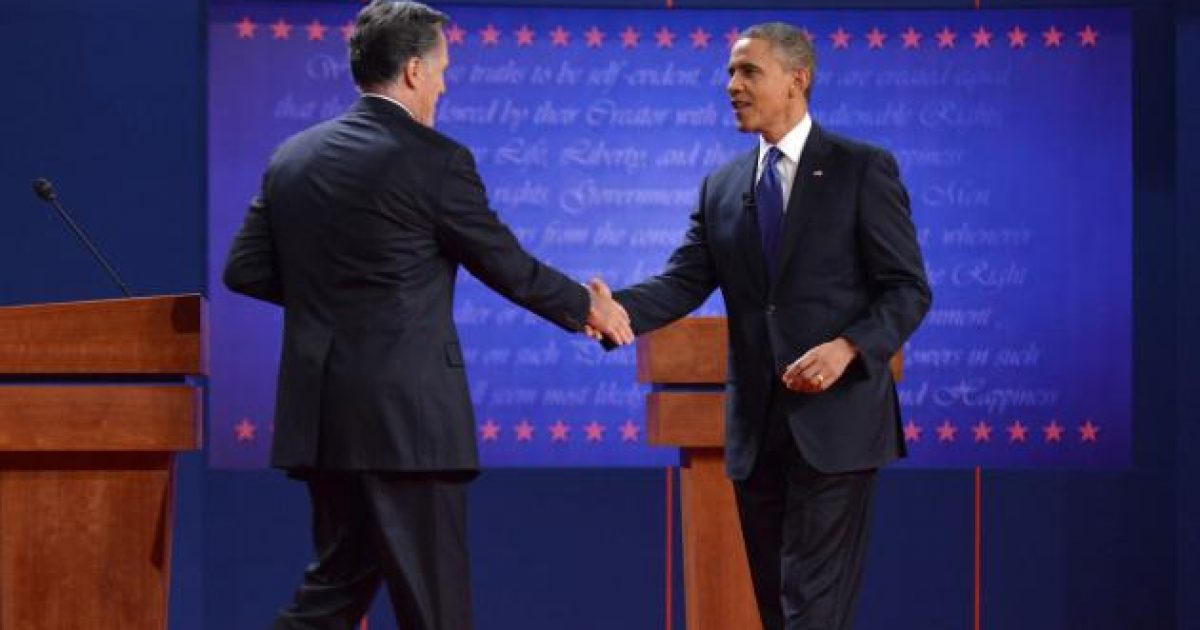 After weeks of pursuing a soft media strategy in non-challenging environments and pre-debate “prep” with interviewers such as “Pimp the Limp” DJ Laz, David Letterman, and the gals from The View, what we witnessed last night in Denver should not be all that surprising- President Barack Obama was soundly dismantled in the first presidential debate by Mitt Romney in every regard- stylistically, rhetorically and most importantly, substantively.

If last night’s debate was a boxing match, a referee would have had to stop the fight- or perhaps Obama’s handlers would have thrown in the towel if the fight was allowed to continue. If you remember the beating in the 8th round that Sugar Ray Leonard gave to Roberto Duran over 30 years ago, you’ve already got a pretty good idea of what transpired if you missed the action last night.

It was that bad a beatdown to witness, and it was a listless, disengaged, and embarrassing performance for the President who was outflanked by Romney in nearly every direction. For the first time in nearly four years, President Obama was actually challenged about his policies and held to account for his record, something that the media have routinely refused to do and something that Republicans have not been able to do in such a consequential setting.

CNN’s post-debate viewer poll had Romney the winner 67%-25% and a CBS poll of uncommitted voters had Romney the winner 46%-22% – huge margins by any objective standard. Obama Campaign campaign aide Stephanie Cutter admitted that Romney won on “preparation and style,” and even Bill Maher tweeted that Obama “looked like he needed a teleprompter.” When your non-adversarial media sources and your die-hard supporters are characterizing your debate performance in such a manner, you know it’s not good.

When you’ve taken liberalism, along with its policy prescriptions and highly questionable premises to their extreme application as President Obama has from Day One of his presidency, it’s only a matter of time when reality will set in and Waterloo will arrive, and there’s a decent chance that we will look back and realize that tonight was that night.

Whatever you call Obama’s political philosophy- Liberalism/Socialism/Corporatism/Marxism or any other kind of “ism” you assign to it- last night, it was shown to be tired and intellectually indefensible, and thankfully, in front of millions of Americans.

For the first time since he was openly challenged and left reeling by Paul Ryan during a health care summit back in 2010, Obama was forced to defend the indefensible in a setting where he couldn’t hide behind Valerie Jarrett or the fawning media acolytes he’s brushed off for most of this year.

It was almost painful to watch Obama’s guilty expression and dismissive mannerisms after Romney repeatedly called him out for the $90 billion dollars which he wasted on malinvestments in the green energy sector.

Obama’s allies in the media, unable to spin away Obama’s dismal performance were left to vilify debate moderator Jim Lehrer’s “performance,” or lack thereof as moderator. You could easily sense the Left’s palpable desperation and despondency as the New York Magazine referred to Lehrer as the debate’s “one clear loser.”

In fact, we were perhaps inadvertently reminded last night that the best role of a moderator is not to interfere with the proceedings and to encourage pointed exchanges between the candidates. It’s far more informative when moderators pose their question and let the participants go at it for a few rounds when there are substantive exchanges rather than resort to asking frivolous or clearly biased questions, which is clearly what MSNBC’s panel admitted they would have preferred. Lehrer’s approach served to benefit Romney, as he was allowed to follow up on many of Obama’s questionable assertions rather than permitting them to go unchallenged.

It’s hard not to speculate that Romney’s performance last night didn’t substantially help him among independents and undecided voters. No, this election isn’t over by a long shot, but when they write the history of the 2012 campaign, we may very well have just witnessed its decisive turning point last night.