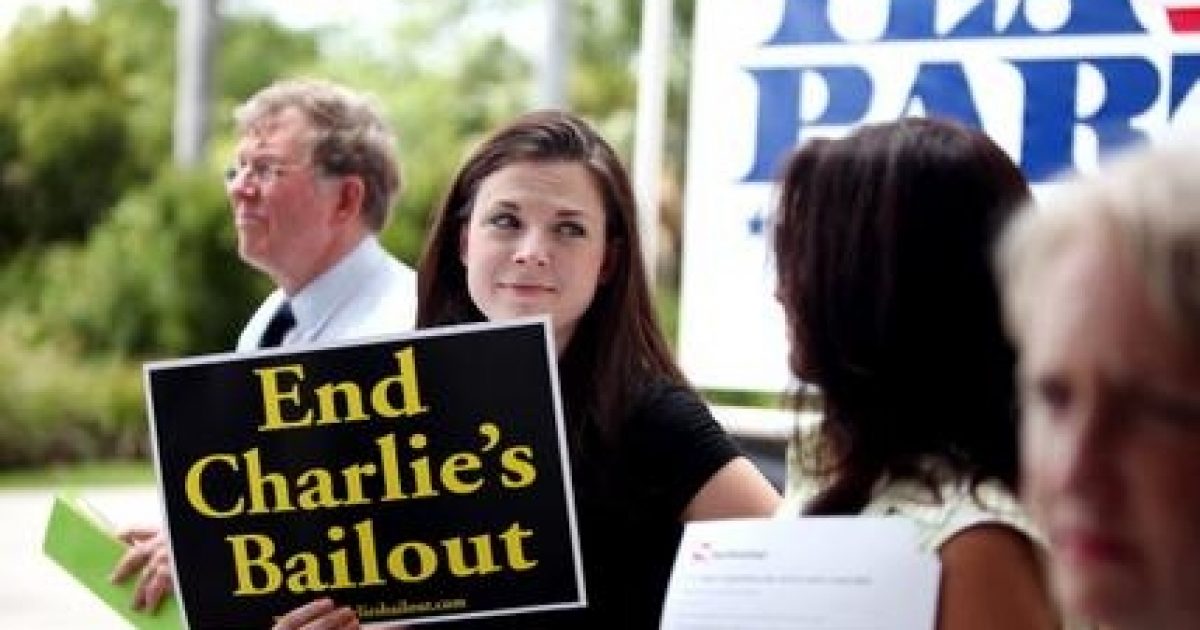 The movement to stop the “Big Sugar Bailout” here in Florida has become something of a cause célèbre for many Tea party organizations across the state, leading up to a big rally that was held last month in opposition to the state’s overpriced land buyout from U.S. Sugar Corp. The overpriced purchase was roundly mocked and appropriately labeled at first as “Charlie’s Bailout”.   As this disgraceful saga continues to unfold, we are now learning that Governor Crist is now using the state’s emergency hurricane funds to finance the purchase of the U.S. Sugar’s land. It almost goes without saying that the deal would be an enormous ripoff for taxpayers that excessively enriches Big Sugar’s execs and the attorneys involved in the transaction.

The company steered $350,000 to McCollum’s attack-ad group, and another $330,000 through a political arm of the Florida Chamber of Commerce last month, the “bulk of those resources” devoted to McCollum, Coker said. The chamber, in turn, bought $883,000 in TV ads last week for McCollum, mainly in the Orlando, Tampa, Palm Beach and Jacksonville markets.

Rick Scott, to his credit, has stood in opposition to this bailout and has now taken a pledge to oppose the state’s bailout of U.S. Sugar (see video above). Now that McCollum is literally in Big Sugar’s pocket, can anyone expect him to stop this deal from happening?  McCollum also supported the SunRail expansion that became CSX’s sweetheart deal, yet another instance of Florida taxpayers getting the shaft.  In all seriousness, how can Florida taxpayers rely on McCollum to put an end to these continual raids on the state’s treasury?

Marianne Moran, Executive Director of The Tea Party in Action, issued the following statement regarding the latest developments concerning the bailout:

The South Florida Water Management District is once again pushing a bailout of the U.S. Sugar Corporation. A deal the District’s chairman himself admitted will result in higher property taxes.  This is an unprecedented taxpayer-funded bailout at a time when Florida taxpayers can afford it least.  We welcome and applaud Rick Scott for signing the Tea Party in Action pledge to oppose the bailout, and hope all political candidates in Florida will join this conservative movement by opposing this corporate welfare.  The Tea Party in Action and our Tea Party coalition has been sounding the alarm on this U.S. Sugar Corporation bailout for many months – see our coalition at Endcharliesbailout.com.

Here’s the other interesting rub- there are untold numbers of McCollum supporters who are, shall we say, big time opponents of this big-time bailout, including  Robert Lowry, Congressional candidate in CD-20; the tea-party group DC Works for Us and its founder Karin Hoffman; Steven Rosenblum, candidate for State House in District 89; and Daniel Paul Diaz, the Florida Director of the Republican Majority Campaign PAC.  This creates a serious dilemma for the credibility of all of these candidates/activists turned McCollum supporters.  Would their continued support of McCollum undercut their credibility and their efforts to call the public’s attention to stop this bailout, or was this simply phony posturing on their behalf?

One of the greatest threats our country faces at this time are all of the crony capitalistic practices that are taking place at the federal and state levels– Goldman Sachs, General Motors, and U.S. Sugar are all in bed with government.  If candidates for public office are going to have any credibility running as reformers that promise to stop the fleecing of taxpayers, it’s going to be a very hard sell when the company that is literally keeping your campaign afloat is one of crony capitalism’s largest beneficiaries.